Home Op-Eds While Biden envoys give away the store in Vienna, Iran escalates the... 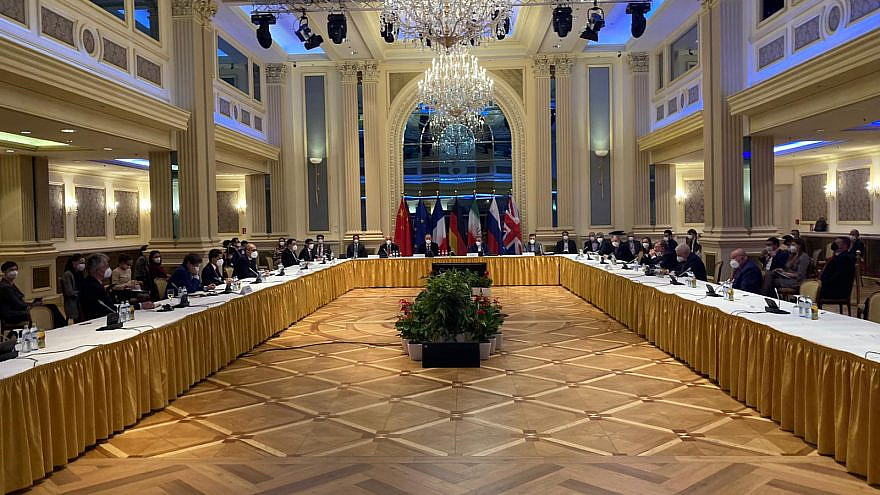 Diplomacy is in bloom in Vienna this spring. According to The Washington Post, the indirect talks taking place in the Austrian capital between the United States and Iran with diplomats from Britain, France and Germany carrying messages between the two parties have been a huge success.

A “senior administration official” assured the paper that progress is being made toward a reinstatement of the 2015 Iran nuclear deal “on every issue, every time we meet.” While there are still issues remaining to be negotiated, at this rate the remaining gaps between the two countries’ positions are expected to be closed “within a matter of weeks.”

The completion of the process is expected to wait until after Iran’s faux presidential election on June 18 in order for Tehran’s efforts to entice the West to resume financing the tottering regime to be a fait accompli. While the usual nonsense about a battle between mythical Iranian moderates and hardliners is used as an excuse for delays, it’s clear that what the nation’s theocrats want to avoid is any kind of distraction from its plans.

The Post article does its best to maintain the fiction that the Biden administration, which has treated the Iran talks as its No. 1 foreign-policy priority, is being careful not to be too generous with concessions. Still,  given the history of negotiations between Democratic administrations and Iran, in addition to the tough line that the regime has taken on refusing to commit to more intrusive monitoring of its facilities or to cease its support for terrorism, there’s little doubt that the “progress” has again been the result of American surrenders. There’s equally little doubt that there will be nothing in whatever it is that comes out of Vienna this summer that will commit Tehran to renegotiate a pact whose already weak restrictions will expire by the end of the decade.

If there were any doubts about whether these talks are being conducted in a different spirit than the ones between the Obama administration and Iran from 2013 to 2015, look beyond what’s going on behind the scenes in Vienna or even the lifting of sanctions in Washington. What else is going on in Iran while American diplomats are boasting to their new “media echo chamber,” provided by mainstream liberal publications like The New York Times, whose coverage of the issue reiterates that of the Post?

That would involve looking at how much Iran is invested in foreign adventures and terrorism aimed at undermining the United States and its regional allies, such as Israel and Saudi Arabia. If you do that, you’d see that just as Iran doubled down on its foreign mischief-making while encouraging former President Barack Obama to think they wanted a way to “get right with the world” in 2013, they’re doing the same thing now.

As Obama negotiated, largely in secret, with Iran, the ayatollahs were doubling down on their quest for regional hegemony by intervening in the Syrian civil war on behalf of the brutal Bashar Assad regime. But instead of taking that as a sign that Iran’s intentions were in question, Obama single-mindedly ignored every provocation that indicated that the regime’s Islamic Revolutionary Guard Corps was expanding its terrorist empire.

Rather than act to stop the spread of its auxiliaries, Obama was fearful lest a strong American response scare the Iranians away from the nuclear talks, where they were getting away with vetoing his demands for an end to their nuclear project. That was what led to Obama’s infamous retreat from his “red line” pledge to punish Assad for using chemical weapons and a host of other decisions that essentially made it clear that he was desperate for a deal at any price.

Biden and Blinken have been saying they will be tougher this time. But as a new round of Iranian provocations begins, there’s no sign that their response will be any different from that of Obama’s.

The Wall Street Journal reported last December that Iran was already supplying the leftist dictatorship in Venezuela, led by Nicholás Maduro, with arms and paramilitary operatives. But now that Biden is president, the Iranians are growing even bolder in their challenge to American security interests. As Politico noted last week, Iran has sent two warships to Venezuela as part of an arms transfer program. This is exactly the sort of thing that American administrations routinely regard as both a threat as well as a violation of traditional Monroe Doctrine interests. Last year, the Trump administration warned Venezuela that it was looking for trouble if it acquired Iranian missiles, and Maduro apparently backed down. It may be that Iran is once again testing American resolve as it once did in Syria, only this time in Washington’s backyard rather than in the Middle East.

Secretary of Defense Lloyd Austin told a Senate Armed Services Committee hearing last week that he was “concerned” about Iran sending ships to the Americas—something it has never done before. But “concern” about Tehran meddling in what Austin called “our neighborhood” was as far as he would go. The Iranian regime could be forgiven for seeing that weak statement as nothing less than an indication that Biden would do nothing about this dangerous escalation.

Nor is the administration up in arms about what TIME magazine reported earlier this month about a massive Iranian disinformation campaign that has been going on in the United States. The goal of the effort was to “spread discord and anti-Semitic tropes,” and was apparently part of an effort to undermine the Trump re-election campaign. According to the magazine, such illicit Iranian activity increased last month after the fighting between Hamas and Israel via bots and trolls being operated by Iran.

Iranian social-media sabotage didn’t stop Trump in 2020 any more than the Russians defeated Hillary Clinton in 2016. But the same administration that came into office vowing to investigate and stop such efforts by Russia isn’t doing much more than “monitoring” what Iran is doing.

When you add these incidents up, it paints a picture of an Iranian regime that is as confident today about its ability to get away with both provocations and continually saying no to the United States at the negotiating table, while expecting to reap concessions from the Americans for doing so, as it was six years ago.

That’s the proper context through which the “progress” and optimism emanating from Vienna should be seen. Much as Tehran sized up Obama and his foreign-policy team as pushovers, the same dynamic appears to be in play again. Iran expects to get its way at the negotiating table. The surest indicator of that confidence is the way it is testing Biden and seeing weakness rather than resolve from its negotiating partner in response to every test. The cost of that failure will make the world less safe than it might have been had America stuck with pressuring Iran rather than appeasing it.