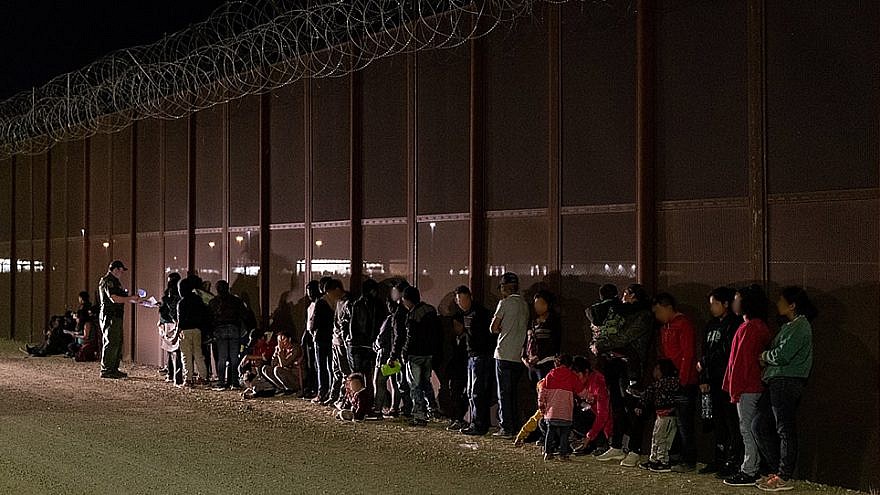 If there was one cause that united all critics of former President Donald Trump during the past four years, it was their horror and outrage about “kids in cages.” In the view of most liberal groups, the detention of minor illegal immigrants in temporary facilities near the southern border was an intolerable human-rights offense. They saw it as proof of the depravity of Trump’s administration and its determination to halt the flow of illegal immigrants.

Among the loudest voices denouncing the president were those of the organized Jewish community. Led by the Religious Action Center for Reform Judaism, HIAS—the immigrant aid group that once devoted itself to Jewish immigrants but now serves an almost entirely non-Jewish client base—the Anti-Defamation League and a host of other mainstream groups, the anger about the spectacle of children being detained in this fashion was seemingly universal. The fervor with which liberal Jewish groups railed at the idea that both those children who had entered the country illegally on their own—as well as those who were, for a time, separated from families or other adults who came with them—were being kept in makeshift prisons was intense.

But as a new surge of illegals has started to pour over the border in anticipation of what they hope will be an end to enforcement of laws against illegal immigration, those who were screaming about the injustice of “kids in cages” must answer an important question. If the detention of minors in makeshift prisons was a crime under Trump, why are they indifferent to it when it is happening now under President Joe Biden?

These Jewish groups are supportive of Biden’s proposal—the U.S. Citizenship Act of 2021—for a massive overhaul of the immigration system that will involve wholesale amnesty for all illegal immigrants already in the country and the loosening of restrictions on those who seek asylum in the United States. The Democratic bill is notable not just for its offer of amnesty but because, unlike previous such legislation, Biden’s proposal has no provisions for strengthening border security so as to prevent future waves of illegals.

Biden has also issued a number of new regulations that will drastically limit the ability of Immigration and Customs Enforcement (ICE) to track down those illegals who have gone through the legal process and are eligible for deportation. The new rules will prevent those guilty of all but the most grievous of crimes from being arrested.

Sympathy for migrants comes naturally to a Jewish community for whom the immigrant experience is baked deep into their historical memory. A faith that enjoins its adherents to honor strangers because they were themselves once strangers can be easily mobilized to regard those who are crossing the border as somehow analogous to Jews who fled Nazi-controlled Europe and were turned away by nativist-inspired restrictions in the 1930s.

That the situation of citizens of Central American nations who wish to enter the United States without permission is, however dire, not remotely similar to that of Jews who were all fleeing a sentence of certain death did not deter liberal Jewish groups from employing bogus Holocaust analogies when attacking Trump.

Their ideological devotion to the principle of support for immigrants’ rights even to the point of advocating for policies that are tantamount to a declaration of an open border overrides any other consideration. That includes the notion of allowing in a massive number of people in search of jobs and willing to work for low wages at a time when there is already crippling unemployment in the United States, especially for minority populations. That this is also happening while we’re still in the middle of a pandemic is also counter-intuitive.

Nor are these Jewish champions of illegal immigrants sensible of the fact that by encouraging the populations of Central American nations to believe that soon the gates of the United States will swing open for them, they are setting off a rush at the border that is already starting to become a humanitarian disaster. Newspapers like The New York Times have been reporting about this growing crisis since December when the impact of Biden’s election and the prospect of the end of a tough enforcement policy became manifest.

What’s even more ironic is that while the administration has sought to persuade those planning on entering the United States that “now is not the time to come,” the flow of children over the border has started to resemble the numbers coming in before Trump put his much-despised measures in place and drastically reduced illegal immigration.

That means that thousands of illegal immigrant children have been detained in recent weeks in what even the Times referred to as a “resumption of Trump-era policies.” What’s more, these children are now being kept in some of the same facilities that were denounced as a nightmare by immigrant advocates.

Yet all we’re hearing from some of the same groups that didn’t shy away from calling Trump a Nazi for putting “kids in cages” is crickets when Biden does the same thing. As an article in The Forward noted, those who Jews shamelessly virtue-signaled about the plight of children in detention centers are singing a very different tune these days.

Motivated by their sympathy for an administration that shares their open-borders sentiments, they’ve chosen to keep quiet about Biden treating children no differently than Trump and to let Biden spokespersons get away with the kind of rhetorical mendacity they wouldn’t have tolerated from a Republican.

What can we learn from this?

Such liberal Jewish groups are shameless partisan hypocrites who are, in practice, more interested in providing cover for a Democrat than in actually helping the children for whom they’ve been weeping crocodile tears when they were supposedly Trump’s victims. Their willingness to give Biden a pass for putting “kids in cages” is the sort of brazen deceit that makes even run-of-the-mill hypocrites look sincere.

Just as important, by failing to understand the consequences of their amnesty advocacy and helping to set off another surge at the border, they are doing incalculable harm to the people they claim to wish to help. Encouraging the shadowy forces that facilitate illegal immigration to redouble their efforts is setting in motion a series of events that is already leading to more deaths at the border and a crisis in areas on the American side of the border where communities are being overwhelmed by the flow of migrants.

It isn’t too much to ask that those who regard immigrant rights to be a Jewish issue to at least be consistent with respect to their condemnations and stop acting like shills for the Democratic Party. Nor is it unreasonable to expect them to stop acting as if the plight of these migrants isn’t in some way related to advocacy that is essentially urging them to not only violate U.S. laws, but to also put their lives and that of their children at risk.