Home Op-Eds Why is young evangelical support for Israel eroding? 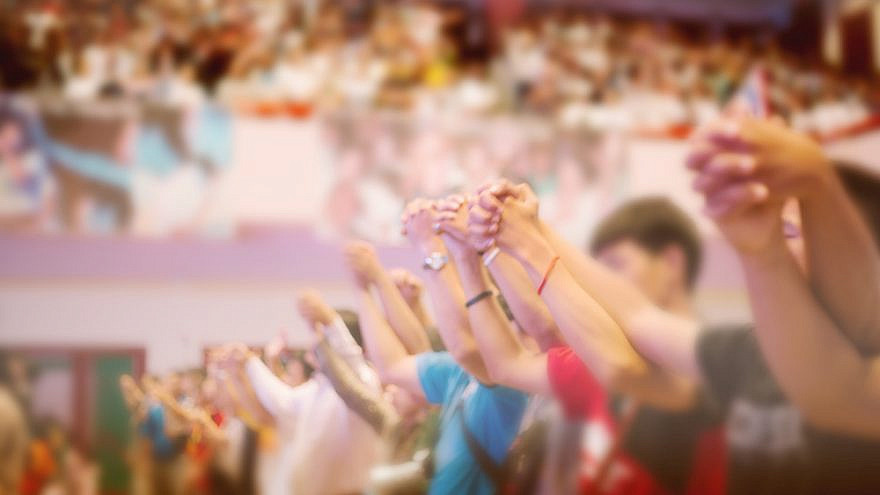 Over the past few decades, evangelical Christians have emerged as one of Israel’s core bases of support both in the United States and many other countries as well. However, growing trends of secularization and liberal ideology, as well as the erosion of a pro-Israel theology, are threatening to undermine this support, particularly among young evangelicals.

A recent poll commissioned by two University of North Carolina at Pembroke professors—Mordechai Inbari and Kirill Bumin—showing a sharp drop in support for Israel among the younger set has raised some eyebrows.

The poll focused on evangelicals ages 18 to 29, and was conducted between March 22 and April 2 by the Barna Group, a polling and research firm focusing on issues of faith and culture.

Inbari and Bumin remain cautious in explaining the reasons, saying they’re in the “preliminary stages” of their analysis.

Still, they have their hypotheses, one of which is related to the racial makeup of evangelicals.

“We discovered that race matters,” says Bumin. “What we find is that African-Americans are about 34 or 36 percent less likely to support Israel than people from other ethnic groups.”

Telhami says the demographic issue is “probably the biggest thing that’s going on. Why? Because we know that the evangelical population that is most supportive of Israel is white evangelicals.”

Inbari and Bumin also note that progressive ideas relating to social and racial justice have made their way into evangelical churches, of which the Palestinian issue is a subset. Palestinians are “lumped” with a number of other “threatened minorities,” whereas Israel is viewed as an aggressor, explains Bumin. 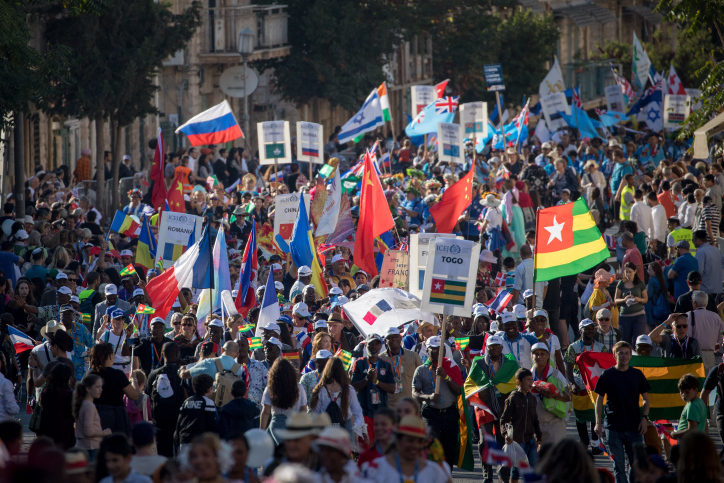 Thousands of Israelis and evangelical Christians in Jerusalem mark the Jewish holiday of Sukkot, the Feast of the Tabernacles, on Oct. 10, 2017. Photo by Yonatan Sindel/Flash90.

‘This is a big shift’

Another factor is theology. Evangelicals traditionally identify with premillennialism, which teaches that God’s promise to the Jewish people remains in force and that there is still a role for the Jewish people to play in the “end times,” which includes a return to the Land of Israel. In contrast, amillennialism—sometimes referred to as supersessionism, or replacement theology—maintains that God’s promise to the people of Israel has been fulfilled with the advent of Jesus, and so they no longer have a role in the Divine plan.

Inbari says there has been an “erosion” of premillennialism: “This is a big shift. We see this very, very clearly now already in two surveys.”

Bumin also says there is less focus on eschatology, the study of the “end times,” in evangelical churches. “This is more anecdotal, but we are hearing this from multiple pastors and church leaders. … They say that increasingly what their pastors are talking about is not the end times, but rather more mundane daily concerns of young evangelicals. And so if the focus shifts away from the discussion of eschatology … the mentioning of Israel, the mentioning of the Jewish people becomes less frequent,” he says.

Bumin notes this is the case in megachurches, which are “not necessarily focused on eschatology or theology.”

According to the Hartford Institute for Religion Research’s 2020 Megachurch Report, there are 1,750 mega-churches in America, defined as churches with regular attendance of 2,000 or more. These mega-churches “tend to be far more supportive of the Palestinian people,” says Bumin.

Premillennialists also tend to “interpret Bible very literally,” he says, with Inbari adding that “older evangelicals may be closer to a literal translation of the Bible, while younger evangelicals may take the Bible as a guideline or portrayal rather than literal rules.”

The new poll has been criticized by some precisely on the religiosity of those surveyed.

Josh Reinstein, director of Israel’s Knesset Christian Allies Caucus, tells JNS “the poll is misleading like the many others before it. The children of evangelicals are a lot less religious than their parents. I believe that if the pollsters only asked people in that age group that go to church on Sundays, you would see a way higher show of support for Israel.”

Reinstein says that because evangelical theology holds that God’s covenant with Abraham is everlasting, evangelicals are “by definition” pro-Israel.

Pastor John Hagee, chairman and founder of Christians United for Israel (CUFI), the largest pro-Israel organization in the United States, similarly tells JNS in connection with a recent split in the Southern Baptist Convention, “If you are a Bible-believing Christian, you will be a supporter of Israel. If you’re not, you won’t be. End of story.” 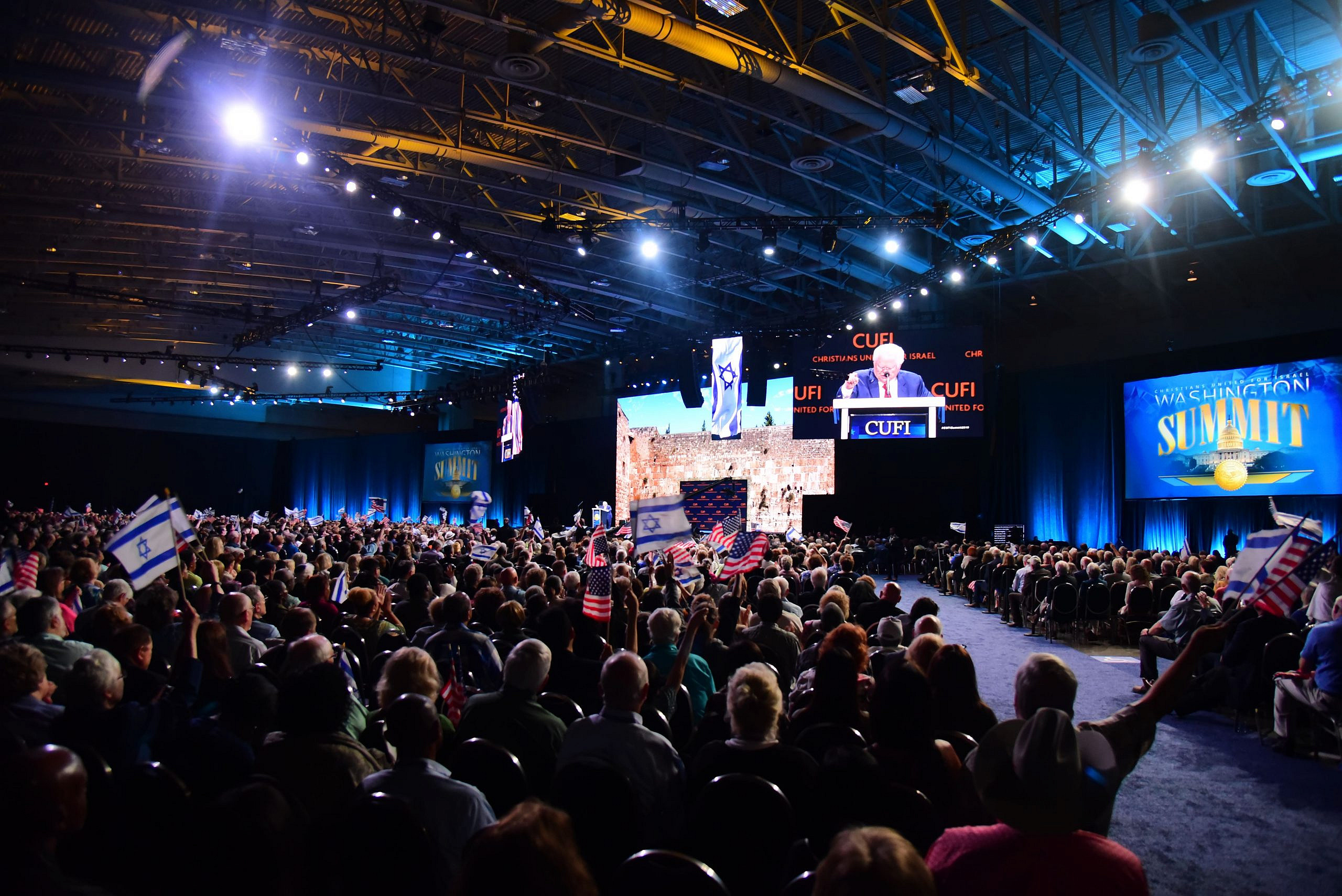 Jim Fletcher, an independent researcher and writer on evangelical issues who spent 15 years in Christian book publishing, says it’s the latter, and he isn’t surprised by the poll results. There has been a “mass exodus” of young evangelicals leaving church, he states, especially when they get to college.

Bible study has been diluted, premillennial theology weakened, and social-justice issues have been injected into the church, he says, affirming much of what Inbari and Bumin suggest but also dismissing one of their most important hypotheses, relegating the racial demographics to almost a nonissue. Noting that some black leadership is very pro-Israel, he says, “I’m much more concerned about white evangelical leadership. That’s the problem.”

‘Subtle’ de-emphasis on the Bible

He points to several key factors that have negatively impacted evangelicalism.

One is the Church Growth Movement, sometimes called the seeker-sensitive movement, which began in the 1960s. “It’s all the same concept. You’re tailoring your church service to make the attendee comfortable,” says Fletcher. “In essence, the model is you go out and you canvas the neighborhood, and you find out what people want in a church. Then you go do that.”

He says the movement was spearheaded by megachurch pastors like Bill Hybels and Rick Warren. He notes that Hybels and his wife are not Christian Zionists, and so lean towards the Palestinians. He says that, too, has been copied by their protégés. “It’s been a problem as their church model multiplied; it just filtered down.”

The Church Growth model has several unintended consequences, says Fletcher, one of which is a “subtle” de-emphasis on the Bible. “When I was growing up in the evangelical church—and I was born and raised Southern Baptist—we had congregational Bible reading, meaning a pastor would read scripture from the pulpit, and we would all follow along in our Bibles that we would bring to church,” he relates.

“Now what they call Bible study is often a Bible study created by and for the lead pastor. So, for example, with Rick Warren, you have his famous book, The Purpose Driven Life. Well, [that] stepped in as a Bible-study substitute for actual Bible study. The end result is you’re not going to get a comprehensive view of scripture. You’re not going to understand, in the context of what we’re talking about, Jewish history,” explains Fletcher.

He says the pastor isn’t going to want to offend them because a) once offended, they’ll leave, and that reduces church coffers; and b) it goes against the Church Growth credo, which puts the congregants and their comfort first.

Fletcher doesn’t lay all the blame on the Church Growth Movement. He says liberal theology has been a “huge problem” in the last 30 years, filtering down from pastors to congregations and Christian millennials. “Years ago, there was a Bible study developed in the United Methodist Church called ‘Disciple Bible Study.’ I was astonished when I went through these studies for the Old Testament at how much of it was relegated to myth. When you do that over time, especially in an entire denomination, you’re going to wipe out any view that Jewish history is real.

“So if Jewish history isn’t all true, then a Christian millennial today can say, ‘Well, then why is the Jewish claim to the Land of Israel stronger than the Palestinians or anybody else?’ And that is absolutely what’s happened.”

Fletcher says 40 years ago, pastors and ministry leaders, such as Jerry Falwell Sr. and Adrian Rogers, who were personally pro-Israel, acted as “a kind of firewall.”

He expresses surprise that Hagee dismissed the problem, noting that 10 years ago, CUFI was the one warning of the danger: “If Hagee thinks there isn’t a problem, he’s wrong. We have a serious, serious problem with pro-Israel support in this country in churches.”

And, he adds, “we have a serious education problem in the evangelical church. Too many people just don’t know a lot about any given subject. They’re smart, but they’re starved for information because their pastor is up there hawking his latest book from the pulpit on Sunday morning, instead of explaining serious issues.”

The poll does suggest a lack of basic knowledge about the Arab-Israeli conflict among young evangelicals. Even as it shows support for Israel dropping, more than 71 percent said “Jerusalem, in its entirety, should be the capital of the State of Israel, and its governance should not be shared with the Palestinians.” Assuming a shift away from Israel, such a large number taking an anti-Palestinian position displays, at the very least, confusion on the subject.

Fletcher dismisses the criticism, frequently heard in Israel, that the country has devoted too much attention to its evangelical supporters at the expense of others. He says the situation is the opposite. “I think Israel needs to establish an actual group that would engage with evangelicals 24/7. I think they don’t do it enough.”

Fletcher would have found a more ready ear in the previous Israeli government. Former Israeli Ambassador to the United States Ron Dermer drew headlines when he told a Makor Rishon conference in May that Israel should focus its public-relations outreach on evangelicals over U.S. Jews. Israel’s new Foreign Minister Yair Lapid holds the reverse opinion, having warned for years that the Netanyahu administration had become too close to the “conservative evangelical faction of the Republican Party.”

Fletcher’s prescription is two-fold. He says Israel needs to come up with a “serious strategy beyond just bringing in tourists and engaging with big ministry heads. They need to do grassroots work here in American churches.”

For evangelicals, they need to “get back to individual Bible study and branch out from there.” He doesn’t hold out much hope for changing the minds of ministry heads, but U.S. evangelicals “individually need to get into serious Bible study and serious study of these issues, such as the Israeli-Palestinian conflict.”