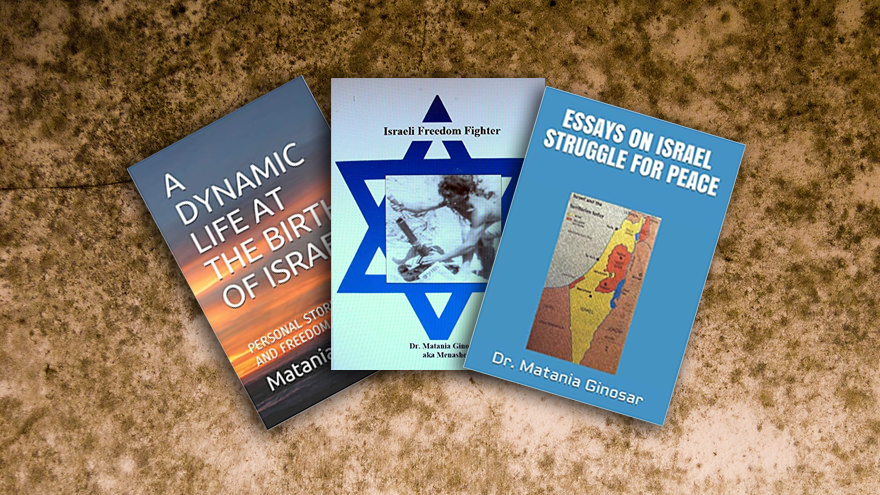 Take one author,(Matania Ginosar), read his three books, and you’ll get a clear perspective on the transformation of a terrorist group into an official part of the government of Israel from the perspective of one of its youngest and longest-serving members.

Matania Ginosar, a descendant of a Palestinian-jewish family from Tzfat, joined the Lehi group at the age of 15 (of which Shamir -who would later become Israel’s Prime Minister- was also a part).

Lehi was known as the most relentless terrorist anti-british organization and their members, accused of being terrorists where hunted down and imprisoned both by Brits and the Hagana until the state was founded and its members integrated to the military establishment.

Like many Israelis, the author, Mr. Ginosar ended up immigrating to the United States where he graduated from MIT, and received his doctorate from UCLA where he has stood out for his technological ability and inventiveness and where he become an environmental and peace activist.

“A dynamic life at the Birth of Israel” talks about his youth, his girlfriends, his participation in the Lehi and his teenage “antics”.

In “Israeli Freedom Fighter” he tells his story and participation in the Lehi (the Stern gang, the most aggressive terrorist group in the country), the assassination of Count Bernadotte, and his “evolution” towards the Hagana and other defense groups. that although officially antagonistic to terrorism, they gladly accepting his help,

In “Essays on Israel Struggle for Peace“, a hyperbook of more than 600 pages, the author writes events, news, statements and notes from over 60 years exposing the lies, exaggerations and thoughts that have accompanied him throughout those years

“Anti-Israelism is an invention of Muslims and Arabs to create “a cause” that unifies their tribes and distracts attention from their abuses and anti-democratic positions.”

“The ‘Arab Summer’ is a lost attempt to modify a mentality of centuries to give way to equality, plurality, respect for agreements and tolerance all these values ​​not only non-existent but opposed to the current mentality for centuries in the Muslim world where the change cannot be given from the outside but it would have to take place from the inside in a long and painful process that has not borne fruit so far.

We must emphasize that the last line of the book says:

“Any act of opposition to the nuclear development of Iran should be welcomed because this program is a danger for ALL the countries of the region and adds so that there is no doubt in this last chapter entitled” The Abraham Agreements “I am not a Trumpista”. which gives the book a whole new perspective that all of us, Zionists and anti-Zionists, sympathizer of Netanyahu or Trump or none, imperialists and separatists and all the other ists, should read as a platform for questioning and a new perspective on the conflict, its reality and its future.