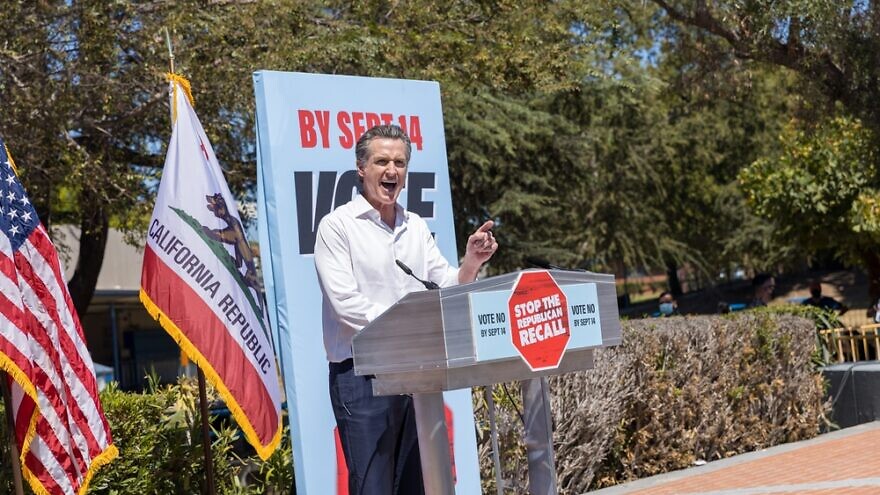 Despite the odds that California’s embattled Democratic Gov. Gavin Newsom will defeat an effort to recall him on Tuesday, Democratic organizations, including the Democratic Majority for Israel (DMFI) and the Jewish Democratic Council of America (JDCA), as well as the party’s leading politicians are not taking the race for granted.

U.S. President Joe Biden is scheduled to campaign on Newsom’s behalf on Monday, following Vice President Kamala Harris, a California native, last week, among many other Democratic leaders. While there are no issues that are seen as specifically Jewish in the race, the state’s total Jewish population is only second to New York, making Jews an essential voter block to activate.

On Sunday, the JCDA led a phone-banking effort with its supporters contacting Jewish voters across California to vote “no” on the first question on the ballot of whether to recall the governor and will continue its effort on Monday with a celebrity guest, podcaster and former speechwriter for former President Barack Obama, Jon Lovett.

DMFI on Thursday distributed a news release expressing what Democrats feel is at stake in this off-cycle recall election.

According to a recent study by the Jewish Electorate Institute, California is home to approximately 900,000 adult Jews—most of whom, like elsewhere in the country, are Democrats.

While nonpartisan, the American Jewish Coalition of Los Angeles said a lot remains at stake in this election.

“We are encouraging and exhorting Californians who are eligible to vote … and not sit this one out,” said AJC regional director Richard Hirschhaut.

He noted that congressional districts with the largest concentration of Jews surround Los Angeles—followed by San Francisco, San Diego, Sacramento and other coastal cities—and cover the entire spectrum of observance.

“There is, I think, a thread—a more creative streak and thread that runs through some of the more liberal expressions of Judaism in California,” he said.

Hirschhaut pointed out that not only was it a non-election year but that it was also odd to hold the election in September rather than November.

“The risk there is that a small number of the electorate could ultimately shape the outcome of public policy for millions here in California,” he said. “And that’s really what is underscoring the exhortation that people must make voting on this issue and this referendum a priority, lest we suffer the consequences of having not exercised our civic duty and responsibility.” 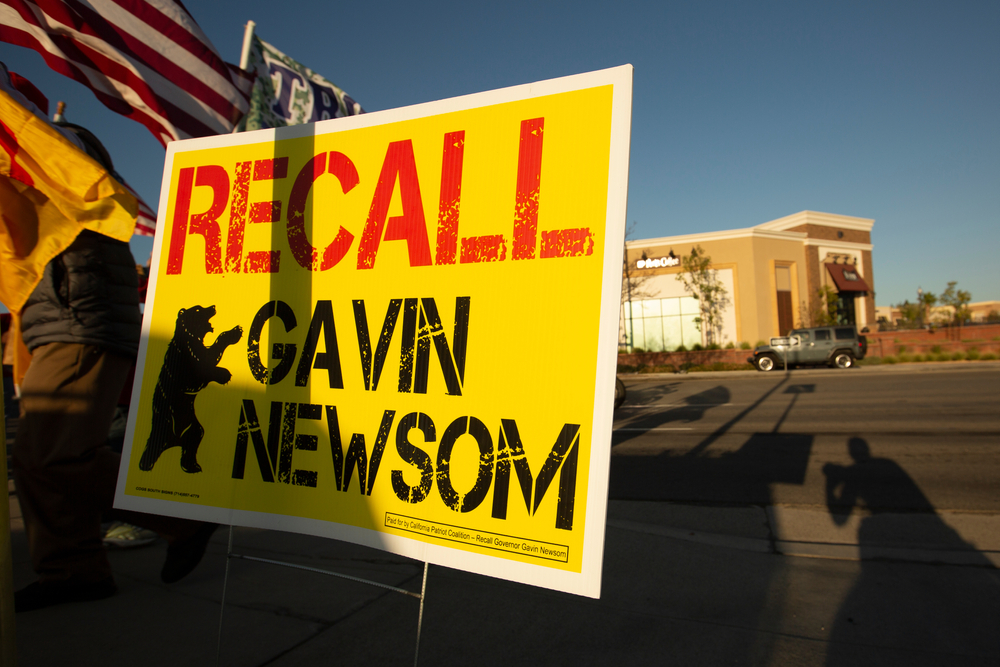 ‘An undemocratic piece to this recall’

Both major candidates appear to be friendly towards the Jewish community.

Hirschhaut recalled that Newsom participated in an AJC-led “Show up for Shabbat” program a week after the Tree of Life*Or L’Simcha Synagogue shooting in Pittsburgh in October 2018.

He also said that the governor and his team worked closely with Jewish groups in rectifying problematic parts of the state’s proposed model ethnic-studies curriculum.

Nevertheless, anti-Semitism remains a major issue for California Jews, especially in the wake of Israel’s 11-day conflict with Hamas in Gaza in May, which saw a spike in anti-Semitic hate crime, including the attack on Jewish diners in Los Angeles by pro-Palestinians that drew international headlines.

For his part, Elder is vocally pro-Israel, speaking at a pro-Israel rally in the San Diego County city of El Cajon in July and has even been published by Jewish publications. Elder was also recently endorsed by the Jewish Republican Alliance.

The efforts to recall Newsom were aided by the COVID-19 pandemic, with organizers being given more time to collect the required number of signatures to qualify to hold a recall election, calculated as 12 percent of the total number of votes in the previous gubernatorial election.

All registered California voters have received ballots in the mail—something that was implemented as a pandemic precaution last year, though voters can still show up in person to the polls on Tuesday. The ballot contains two questions: The first asks whether the governor should be recalled; and the second question asks which of the 46 candidates, not including Newsom, is the person’s choice to become governor.

The first question requires only a simple majority for the governor to be recalled, after that, the candidate who receives the highest percentage of votes is elected governor and the recalled governor is not among the list of candidates. There is also no runoff of the leading candidates. 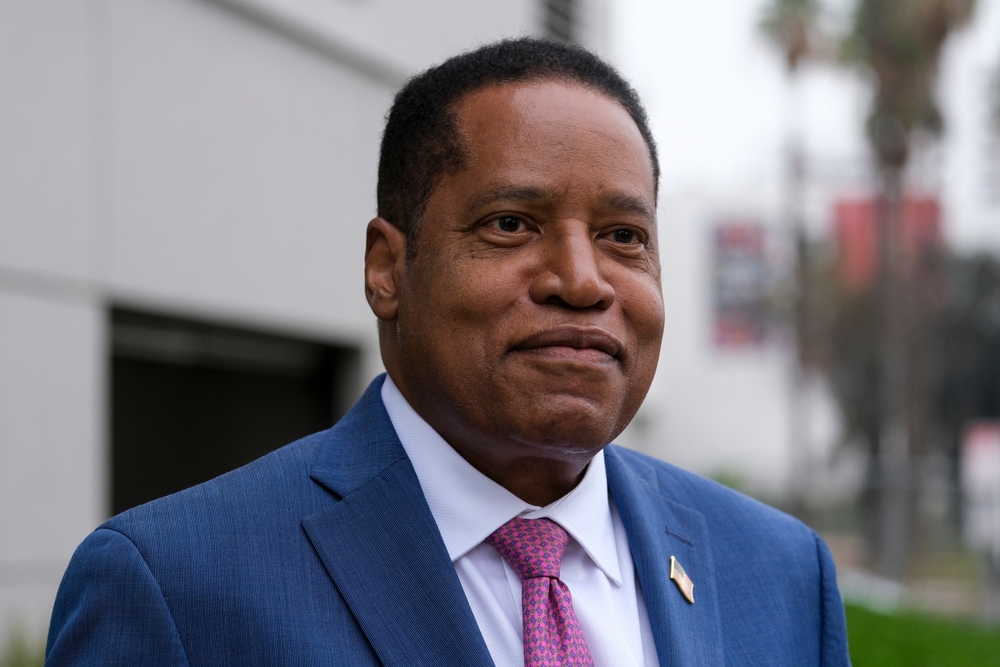 The state’s only other gubernatorial recall occurred in 2003, where former Democratic Gov. Gray Davis was recalled and Gov. Arnold Schwarzenegger, a moderate Republican, was elected.

Yaroslavsky, while saying he cannot speak for how California Jews feel about the election, said that he believes most would be opposed to it not just because the vast majority are Democrats, like himself.

“First of all, there’s an undemocratic piece to this recall, which I think offends the sensibilities of the Jewish community,” he said. “You have an election where the governor could get 49 percent, the recall could prevail 51 to 49 [percent]. … And then a guy like [Larry] Elder could get 18 or 20 percent of the vote … and he could become governor. It’s a patently undemocratic system.”

The concerns are justified, as early polls in the race showed that there was a significant risk to Newsom and the Democratic efforts give Republicans some hope of victory.

‘Ultimately, this is still a really Democratic state’

While the Republican Jewish Coalition (RJC) has not endorsed Elder or any of the candidates challenging Newsom, RJC political director Sam Markstein said that RJC urges voters to recall the governor and believes that the Democratic effort is a sign that Democrats feel vulnerable.

“Gavin Newsom is a disaster. He botched the COVID response; he shut down and crushed small businesses across the state while having fancy dinners for himself at [the] French Laundry,” said Markstein. “He’s out of touch, he’s a hypocrite, and it’s time for new leadership in California.”

Those running against Newsom have blamed him for a number of problems in the state, such as rampant homelessness, but are most upset by the state’s measures to stem the ongoing pandemic. This has given Newsom’s opponents the motivation to campaign against him, which is reflected in polling when asked about how enthusiastic voters are about the election.

Predictably, Democrats are less enthusiastic about an election that they believe is wasting valuable taxpayer resources and party leaders hope that this does not translate to low Democratic voting rates, which Markstein believes is likely.

“I think we’re going to have a very large turnout relative Republican to Democrat on Election Day,” he said. “Republicans and others are charged up to get out and cast their votes on Sept. 14.”

On the flip side, Kyle Kondik, managing editor at Sabato’s Crystal Ball at the University of Virginia Center for Politics, said Election Day in-person turnout isn’t going to be indicative of success or failure.

More than 22 million ballots were mailed, and nearly 8 million have been returned—most from Democrats. It is expected that Republicans will make up a higher percentage of in-person voters on Tuesday, though the high turnout rate so far for the mail-in ballots indicates that Democrats have also been energized. During the past three gubernatorial contests, the turnout was at approximately 10 million, which means the recall is trending to be a high turnout race.

While pro-Newsom forces may have started slow and looked vulnerable, nearly all recent polls show a significant increase of support for keeping him in place.

Kondik and Yaroslavsky say part of it is because Democrats realized that if they ignored the recall, they could be vulnerable. Another reason is that Elder shot to the top of the list of challengers, providing a foil for Newsom and Democrats, who point out that Elder’s beliefs on abortion, climate change, minimum wage and criticism of pandemic measures are not widely supported by the majority of Californians.

“Ultimately, this is still a really Democratic state. And it seems like the Newsom camp is doing what they need to do to get their own voters interested in voting,” said Kondik.

“We don’t know—based on their registration—precisely how everyone’s voted. There will be at least some Democrats who vote to recall Newsom; there also will be some Republicans who don’t vote to recall Newsom. But what you’d have to see, I think part of the equation here, would be that Newsom [has to] lose a fair number of registered Democrats and based on polling, there’s not that much indication that he’s going to lose a lot of registered Democrats.”

Newsom, who won the governorship by approximately 24 percent in 2018, would have to see a large erosion of his support to be recalled.

“I think that Elder has actually helped crystalized the election in a political sense. It’s now a race between Newsom and Elder, and not as much about Newsom’s job performance, which I think has been on balance positive,” said Yaroslavsky. “Anybody who’s a chief executive—a governor or mayor these last two years—would have taken a hit on their popularity just because people want to blame somebody for their predicament, and you blame the person at the top.”