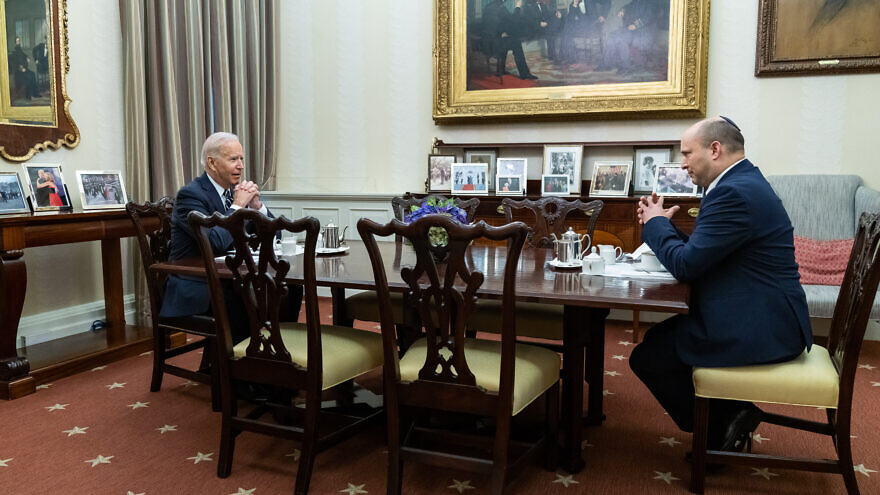 The Biden administration held a short telephone call with leaders of American Jewish organizations on Aug. 27, giving them a general outline of the meetings between U.S. President Joe Biden and Israeli Prime Minister Naftali Bennett earlier that day.

In the off-the-record call, which lasted around half an hour, White House Senior Director for the Middle East and North Africa Barbara Leaf briefed the organizational leaders on how the meetings went and answered four questions, according to sources familiar with the call.

The call took place at 4 p.m. after being rescheduled numerous times that day. Originally, the call was going to include Brett McGurk, White House coordinator for Middle East and North Africa, but he was unavailable due to the situation in Afghanistan.

A source familiar with the call who asked to remain anonymous told JNS the impression from the call was that the administration was interested in showing that the meeting between the two leaders went well and is creating a solid groundwork for future negotiations, and that there is a new spirit of cooperation between the two leaders, as opposed to the somewhat contentious relationship between former Prime Minister Benjamin Netanyahu and the Obama administration.

The call did not delve deep into specifics on Iran besides, but a major direction change for both leaders was a pledge not to be public with criticisms of each other’s policies towards Iran.

No additional information about the alternative plan Bennett presented to Biden was provided during the call, but it was clear from both the call and the readouts provided by the White House that the Biden administration has not given up on trying to reenter the 2015 Iran nuclear deal.

During their White House meeting, Biden told Bennett that “we’re putting diplomacy first and seeing where that takes us.” However, the president did note that if diplomacy fails, “we’re ready to turn to other options.”

The groups on the call included representatives from The Jewish Federations of North America, the Conference of Presidents of Major American Jewish Organizations, B’nai B’rith International, Israel Policy Forum, Americans for Peace Now and others.

Leaf told those on the call that the president did raise the issue of evictions in the Sheikh Jarrah neighborhood in Jerusalem and talked about the proposal for a Palestinian consulate the U.S. plans to open in Jerusalem.

The Biden administration announced plans to reopen the consulate, which had been merged into the U.S. embassy in Jerusalem by the Trump administration, but had agreed to hold off on the move until after the Bennett government passes a budget, likely in November.

The call was strictly in question-and-answer format and the Jewish leaders did not exchange their opinions with the administration.

One of the leaders’ questions addressed the expansion of the Abraham Accords, and Leaf said the administration was committed to extending the U.S.-brokered normalization agreements between Israel and four Arab states. There was also a mention of replenishing Israel’s Iron Dome interceptor missiles, but not an in-depth discussion on that subject.