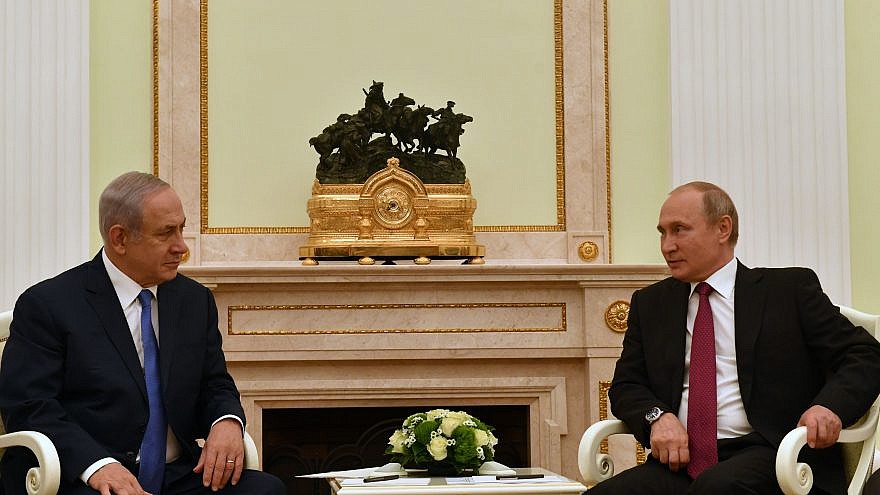 Despite tensions between their home countries, Israeli Prime Minister Benjamin Netanyahu will meet with Russian President Vladimir Putin on Feb. 21 in Moscow, where the two are expected to discuss the Iranian threat.

“It’s very important that we continue to prevent Iran from entrenching in Syria,” said Netanyahu. “In many ways, we’ve blocked that advance and we’re committed to continue blocking it, preventing Iran from creating another war front against us right here opposite the Golan Heights. This is the main subject I will be discussing with President Putin.”

According to Israel, when Syrian military air defenses responded to the airstrike, they failed to hit the Israeli jets, shooting down a Russian Il-20 reconnaissance plane carrying 15 crew members instead.

Last month, Russia called on Israel to stop its “arbitrary” airstrikes in Syria, saying that they should be “ruled out.” This was in response to Israel launching a massive attack on numerous Iranian targets in Syria, such as a site at Damascus International Airport, munition storage facilities, an Iranian military training camp and an Iranian intelligence site.

“The practice of arbitrary strikes on the territory of a sovereign state, in this case, we are talking about Syria, should be ruled out,” said Russian Foreign Ministry spokeswoman Maria Zakharova. “We should never allow Syria, which has suffered years of armed conflict, to be turned into an arena where geopolitical scores are settled.”

The Washington Institute for Near East Policy’s Anna Borshchevskaya told JNS that Putin and Netanyahu want stability in the region despite their different goals.

“Putin has neither the desire nor ability to oust Iran from Syria,” she said. “For one thing, Putin’s entire Syria strategy is predicated on a partnership with Iran. Putin wants to be seen as a peacemaker in the region, someone who can talk to everyone—and indeed has worked hard to build ties with virtually everyone in the region. This is one of among several key reasons why he also wants good relations with Israel.

“But good relations doesn’t mean both sides are on equal terms. Israel for a long time now has been in a difficult position vis-à-vis Russia in this sense—for instance, Russia controls the Syrian skies,” continued Borshchevskaya. “In the context of U.S. retreat from the Middle East that began under [President Barack] Obama, Bibi has visited Moscow more frequently that Washington. Moscow’s public rhetoric towards Israel also changed after the IL-20 incident.

“Meanwhile, tensions between Iran and Israel continue to escalate,” she added. “So it’s not surprising that [Netanyahu] is visiting Moscow again.”