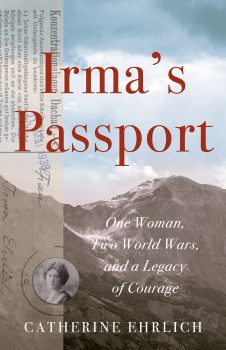 This memoir combines journal entries of Zionist fundraiser Irma Ehrlich with the research and narrative of her granddaughter, Catherine Ehrlich, to tell the story of a strong-willed woman who migrated to England, and later the United States, with her son, Paul, from Vienna, following the Anschluss that merged Nazi Germany and Austria.

Irma lost two husbands, the first, Erwin Kolmar, in World War I while fighting with the Germans; the second, Jakob Ehrlich, in the build up to World War II when, as a Jewish  city councilmember in Vienna, he was imprisoned by the Nazis and later died of a heart attack following a ruthless beating by a  guard at the Dachau Concentration Camp.

Ehrlich was well known in the Zionist movement, having served as a host and vice president of the 14th World Zionist Congress in Vienna.  When news of his murder became known throughout the Zionist world, numerous offers came to help his well-spoken, highly-cultured widow and their son, resulting in their eventual relocation to England, where she became known as a lecturer on the situation facing Jews in Hitler’s Europe and the need to reestablish a Jewish homeland in what was then British Mandatory Palestine.

Through all her ordeals, Irma, who had been born at the end of the 19th century in what later became Czechoslovakia, maintained her dignity and composure. She had a facility in languages, speaking such proper German, French, and English that she was able to negotiate with officials and also charm audiences throughout England and North America.

Irma’s son Paul is father of the author Catherine Ehrlich.  Catherine had access not only to her mother’s private journals but also to the remembrances of her contemporaries, all of which she complemented with diligent book research.  The result is a highly readable narrative that sheds insight into the lives of well-educated German-Jewish women in the interwar years.  The memoir also helps us understand how many obstacles faced European Jews who wanted to emigrate in the period prior to the Nazis deciding to build a system to mass murder as many Jews as possible.  In the earlier years of the Nazi empire, the diabolical objective under Adolf Eichmann was to strip Jews of all their assets before permitting them to depart to other lands.

Irma encountered Eichmann personally on two occasions.  He menacingly monitored her husband Jakob’s funeral, and was present as Irma ran the gauntlet to acquire the necessary paperwork for an exit permit.

Although Irma subsequently campaigned throughout her widowhood for unfettered Jewish emigration to Israel, her own choice — largely influenced by what made her son Paul happy — was to pursue a new life in the United States, where she became a highly regarded lecturer for Hadassah.

Catherine grew up in a home with mixed religious heritage, her mother coming from a Christian family.