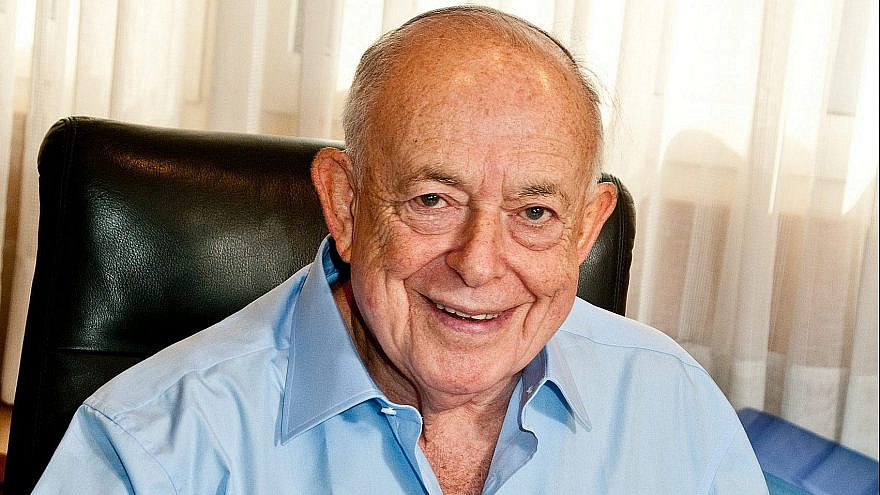 The death in Jerusalem of Isi Leibler at the age of 86 has robbed the Jewish world of one of its towering figures at a time when it is particularly ill-equipped for such a loss.

Leibler, who was head of the Australian Jewish community before he immigrated to Israel, became a multi-millionaire global Jewish leader who was influential for decades on the international stage. His efforts helped pave the way for diplomatic relations to be established between Israel and China and for full diplomatic relations between Israel and India.

Counting Benjamin Netanyahu as a personal friend, he didn’t flinch from criticizing Israel’s prime minister in public—and reportedly to his face—when he thought Netanyahu was getting things badly wrong.

He gathered round his Shabbat table like-minded thinkers, writers, academics and public figures who could help supply his voracious need to inform himself ever more widely, as well as bolster what increasingly felt like the resistance movement of the Jewish people against a world spinning off its moral and political compass.

In 1959, he launched a press and lobbying campaign that brought the plight of Soviet Jewry first before the Australian parliament and then to the United Nations. Arguably, no other individual made a more significant contribution to the eventual exodus of the Soviet Jews some three decades later.

As described in Suzanne Rutland’s recently published biography of Leibler, Lone Voice, he fought a titanic battle against the World Jewish Congress in the first decade of this century after publicly accusing its former secretary-general, Israel Singer, of misusing funds.

Despite a campaign of vilification and intimidation against Leibler by the WJC leadership—from which he never flinched—he was eventually vindicated when information came to light revealing the extent of Singer’s misappropriation of money and the blinkered gullibility of the WJC’s president, Edgar Bronfman, in having allowed the scandal to develop.

Decades previously, Leibler had had an arguably even more significant run-in with the WJC when he stood up to its president, Nahum Goldmann, who had been one of its founders in 1936.

As Rutland describes, Goldmann was an instinctive temporizer who refused to say that the Soviet Union was anti-Semitic because he believed in never rocking the diplomatic boat. In a similar vein, he also feared that any emphasis on Soviet Jews needing to immigrate to Israel would undermine efforts to achieve religious and cultural rights for Jews within the Soviet Union.

There could have been no greater contrast with Leibler’s approach to Jewish issues, and his enduring belief that Jews who thought they could improve the lot of the Jewish people by making accommodations with their enemies invariably aided such foes instead.

Accordingly, he went into battle against both Goldmann and his shtadlonus, or “silent diplomacy”—which according to Leibler had been an abysmal failure ever since 1936— calling instead for a militant public campaign to bring the plight of Soviet Jews to the world. The fight with Goldmann presaged the agonizing concern that was to preoccupy him in later life—the self-destructive quiescence or worse of most of the Diaspora’s Jewish leadership.

As the libelous narrative of Israel demonization became ever more entrenched among the West’s intelligentsia and cultural mavens, and as anti-Semitism became ever more brazen and widespread, Leibler expressed increasing despair in his newspaper columns about the state of Diaspora Jewry. Contemptuously, he described as “trembling Israelites” the timid leadership of Britain’s Jewish community, who were too afraid to make a robust public case for Israel and expose the full extent of the lies being told about it.

Mainly, though, he railed against the embrace by the American Jewish majority of left-wing shibboleths, which not only generated indifference or hostility towards Israel but widely distorted and betrayed the principles of Judaism itself.

He viewed the rise of J Street with horror, observing that its claims to be “pro-peace” and “pro-Israel” were “disingenuous, if not outright absurd,” and maintaining that it instead “actively lobbies the U.S. government” to undermine Israel’s own policies. It had even fanned anti-Semitism by warning that the “blind support” offered to Israel by the American Israel Public Affairs Committee (AIPAC) would generate “hostile feelings that American Jews harbor dual national loyalties.”

In even greater incredulity and outrage, he accused the former Obama administration official and chief executive officer of the Anti-Defamation League, Jonathan Greenblatt, of “determinedly” shifting ADL policy away from its primary mandate of combating anti-Semitism and towards partisan social action issues instead.

As a consequence, he observed in a 2016 column, Greenblatt had effectively “questioned Israel’s democratic structure, engaged in partisan electoral politics and condemned the Republican platform as ‘anti-Zionist’ for omitting a two-state structure, and insisted that groups supporting the boycott, divestment and sanctions movement, which he admittedly condemns, are ‘animated by a desire for justice.’ ”

Greenblatt’s ADL has also endorsed Black Lives Matter. As one of its activists, Temple University Professor Marc Lamont Hill, has admitted, one of its explicit goals is to “embrace BDS” and “dismantle” the State of Israel. And its supporters have repeatedly used anti-Semitic epithets and targeted Jewish businesses or synagogues during last year’s riots.

Troubling groups such as J Street or the ADL are, however, merely symptoms of the main problem. That is the erosion of understanding of and commitment to Judaism among some 70 percent of the American Jewish community, who catastrophically believe that they remain committed to Judaism because they think that the left-wing, anti-Jewish ideologies they have embraced somehow embody Jewish values. This devastating identification with a hostile culture means that a huge swathe of American Jews simply can’t recognize their own connivance with the enemies of the Jewish people.

As the psychiatrist and commentator Kenneth Levin has pointed out, the ADL has been for decades largely silent about or forgiving towards anti-Semitism coming from sources other than the far-right, even though most of it now comes from the left. And the ADL was one of more than 600 Jewish groups that signed last August’s full-page, pro-Black Lives Matter ad in The New York Times.

Leibler possessed an innately tragic understanding that the manifold threats confronting the State of Israel were dwarfed by an even greater danger. This was posed by Jewish community leaders who were betraying Judaism itself, whether through political ideology, ignorance, cowardice or all of these put together.

Few Jews in public life are prepared to stand up publicly against their fellow Jews for betraying the Jewish people through being “trembling Israelites” or worse. To some extent, such reticence reflects an understandable fear based on historical memory, that communal disunity helped bring about the downfall of the ancient kingdom of Israel and remains a threat to Jewish survival.

Such disunity, however, was not just the outcome of communal feuds. More fundamentally, it represented a loss of cultural cohesion through the widespread embrace of or indifference towards ideologies inimical to Jewish values.

Standing up against all this requires a laser-like focus on the key points of the issue, a deep knowledge of and love for Judaism, and unlimited moral courage. These are the qualities of true Jewish leadership. They are in very short supply around the world, but they defined Isi Leibler.

May his memory serve as a blessing.