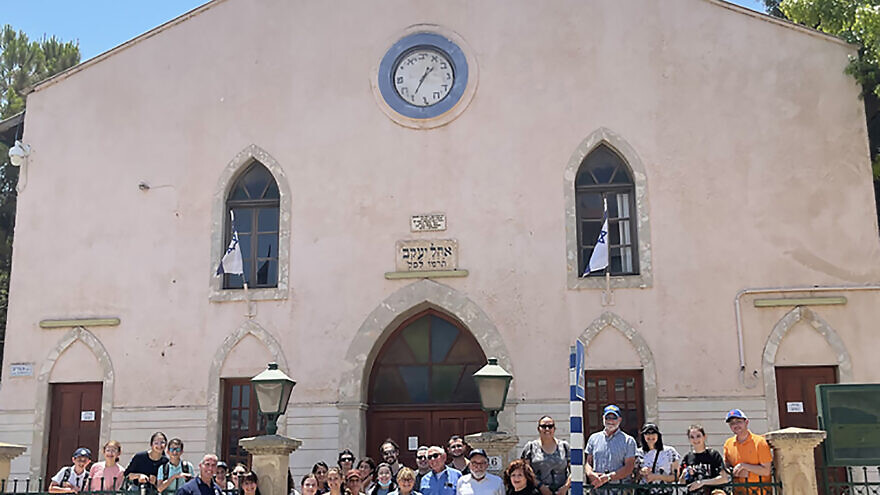 For the 35 of us travelers, both young and old, our plane touched down with an amazingly smooth landing at exactly the right moment in time. Just a week earlier or later, given the Kafkaesque restrictions due to the spike in Covid variants, our group of Touro students, educators and administrators would not have been allowed to enter the Holy Land.

We were participants– faculty and students and all learners– in the Touro College Jewish History Summer Program. Organized by Dr. Simcha Fishbane, this year’s program focused on Eretz Yisroel and its role in Jewish continuity and destiny. At many points in Jewish history, access to Eretz Yisroel was extremely challenging, and the COVID-19 situation reminded us of those earlier challenges and how fortunate we were to be present in the land of our Fathers.

At the end of the first day, we had each been poked and prodded by a seemingly endless defense line of antibody and PCR testers. However, the result of the screenings was well worth whatever pain or inconvenience it cost. By the second day, we would all be allowed to move forward across an incredible swath of space, traversing vast periods of time. Although we didn’t realize it then, both negative (regarding Covid virus) and positive (regarding antibodies test) outcomes became a foreshadowing of the heights and depths that the real-life stories would take us to throughout the rest of our stay in Israel.

Some of the “experiences” brought us back to the terrifying abyss of their time periods like the destruction of our two temples in antiquity and the efforts to rebuild Jewish life after destruction. I traced the tangled history of the Jews of Israel with Rome and Italy, where Jews ultimately settled in the land of their persecutors. Other stories took place in modernity.

For example. the victories in the 1948 War of Independence, the 1967 and Yom Kippur War proved miraculously uplifting. As a result of high-resolution imaging and interactive technology, each of us felt like we were participating in the event depicted. Indeed, connecting the multiple people and events involved in Israel’s struggle for survival and endurance helped even the youngest among us realize that each juncture was a necessary step towards Israel becoming what it is today – a strong, independent, democratic Jewish nation state.

The Struggle for our Homeland

Most of all, whether visiting Shilo, Susya, Tzipori, The Museum of the 1948 War, The Kfar Etzion Heritage Center and Ramat Hagolan among so many other sites, one is struck by the enormous price paid for every rock and pile of desert sand. Each sacred site on our Israeli tour was part of a tooth and nail battle for its acquisition. Israel’s Defense Forces and indeed the whole of the nation took on the struggle for each piece of land as if it was one’s own home…because it was their own home.
We were astonished with the images of ordinary men and women who also behaved heroically in the face of death. Whether as truck drivers in the siege of Jerusalem, or as couriers in the Six-Day War, unarmed civilians chose to not wait for help but instead fight to survive and save other Jews.

The resilience of Jews during one of the lowest times in modern history and how that human catastrophe impacted the modern state of Israel was captured profoundly at Yad Vashem. Through its holograms, survivor testimonies, documentaries and exhibits, we walked through the museum, feeling like we were walking through the depths of despair. That afternoon we left Yad Vashem changed from when we entered. None of us emerged without being impacted by that dark past. How we use what we learned about bystanders as well as perpetrators should affect how we conduct our lives each and every day.

Praying at the Kotel and visiting firsthand the various tombs of our most reverent religious leaders, including Rambam and Yehuda HaNasi, Rabbi Meir Bal Ha-Nes and the Shlah resonated deeply on a level that could never be duplicated via virtual visits. For women, it was particularly moving to be at the site of Hannah, the mother of the prophet Samuel as she prayed so desperately for a child.

For us, as we return to the classroom as teachers or as students, we have hopefully discovered that heroism and bravery are not just the stuff of legends, but also the substance behind everyday men and women who fought like heroes when their moment arrived. For us, the Biblical and modern Israeli narrative is a transformational experience that will long be remembered and passed on to future generations.