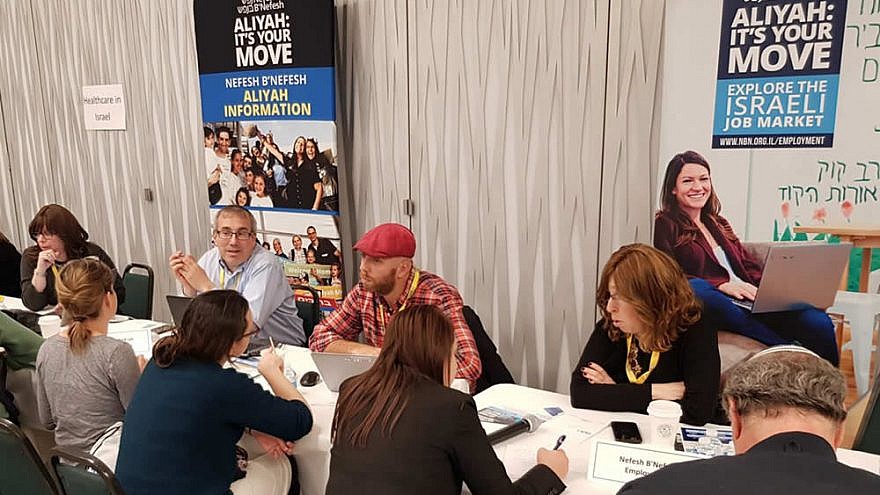 It’s no easy task to pack up one’s earthly possessions and cross the ocean to a new country where a new language is spoken, even if it is a “coming home.” Compounding the matter is selecting which community to live in, what employment opportunities exist, learning how to file taxes in Hebrew and picking the right schools and summer camps for children.

Nefesh B’Nefesh understands all this and hopes to make that transition as smooth as possible.

Of course, another issue came to the fore: anti-Semitism and the safety of Jews worldwide, including in the United States. With the Oct. 27 synagogue shooting in Pittsburgh, active BDS and anti-Israel activity on college campuses—even anti-Semitic rhetoric coming from the halls of Congress—it seems like threats are everywhere.

“We’ve talked about if it’s going to still be safe to live here in two years, but there’s no way to really know that,” said Sarah Goldstein. The young mother-to-be attended the event with her husband, Netanel; they are hoping to make aliyah this summer because they want to raise their family in the Jewish state.

“It’s still safe to be Jewish in America, but we’re seeing things we’ve never seen before. It will be interesting to see if it drives people to move away, though we’re not seeing that now,” Netanel Goldstein acknowledged at the event organized by Nefesh B’Nefesh, Israel’s Ministry of Aliyah and Integration, the Jewish Agency for Israel, Keren Kayemeth LeIsrael (KKL) and the Jewish National Fund-USA.

Rabbi Yehoshua Fass, co-founder of Nefesh B’Nefesh, said in a briefing with reporters: “Everyone says, ‘Oh, this will drive aliyah.’ But the American lifestyle is very strong.”

That is not to say, though, that American Jewry is comfortable with the current climate.

“For my community, I definitely see more people saying, ‘OK, it’s time to go.’ Whether they actually do it, I don’t know,” said Leslie Rosenberg, whose daughter just made aliyah. She and her husband are planning to make the move themselves once their daughter adjusts to life in Israel, but she supposes a major event could prompt her to make those plans sooner. “If something catastrophic happened and we had to pack our bags ahead of schedule, we’d consider it,” she added.

Even though Jews aren’t heading in droves to the airport, this underlying feeling of discomfort is growing more prevalent, noted William Daroff, senior vice president for Public Policy and director of the Washington office of the Jewish Federations of North America.

“The upward spike in anti-Semitism across the world and the United States is concerning and distressing,” he said. “The Jewish community is thinking about our role in the United States and where we fit in now,” he said on the sidelines of the fair.

“I don’t see significant change,” Yoni Niemann, a program manager for Gvahim, a nonprofit which helps new olim find employment in Israel, said. “But I do see an increase in interest in aliyah worldwide.”

Still, he said that when it comes to North America, it’s very much the Zionism factor that really drives it.

Daroff agreed, saying, “we’ve been in America for 350 years, and we are part of the beautiful mosaic of this country.”