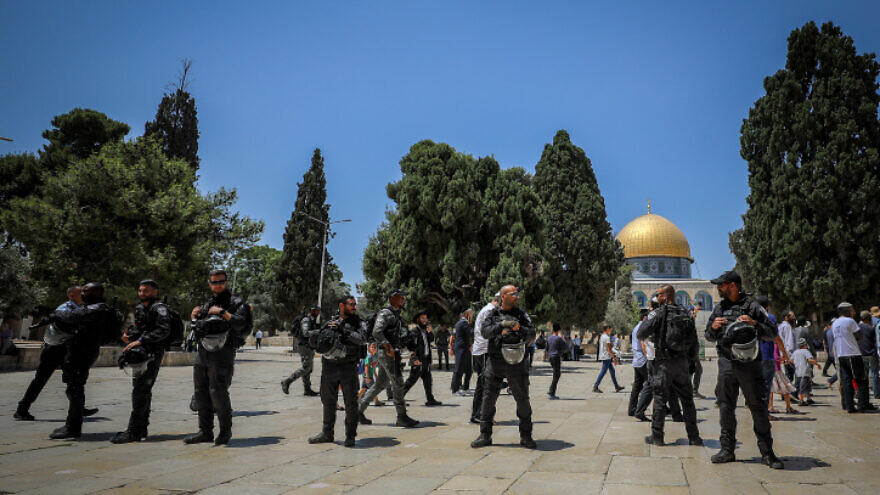 Israeli Prime Minister Naftali Bennett and the Arab Ra’am Party clashed on Sunday after Jews were allowed to sing and pray in certain parts of Temple Mount during Tisha B’Av, on which Jews mourn the destruction of the two temples.

Ra’am, a critical member of Bennett’s razor-thin coalition, was outraged after footage emerged showing Jews, who are normally not allowed to pray on the Mount, singing Israel’s national anthem and praying discreetly in a secluded area.

“Settlers and Knesset members who trespass into the Al-Aqsa mosque could lead to disturbances and a regional religious war,” warned Ra’am. “We will not allow this to happen—we won’t tolerate prayer and the singing of ‘Hatikvah’ [Israel’s national anthem] in the mosque that is under Islamic ownership, all 35 acres.”

Early on Sunday morning, clashes erupted between Israeli police and Arabs on the Temple Mount. The rioters were quickly dispersed and no serious injuries were reported. Hours later, some 1,700 Jewish Israelis, including several MKs, arrived on the Mount to mark the fast day, according to Israeli media reports. According to Palestinian officials, police forcefully evacuated Muslim worshippers to clear the way for the Jewish visitors.

The statement emphasized that this freedom “will be fully preserved” for Muslims as well, who Bennett noted would soon be marking Eid al-Adha and the Day of Arafah fast.

Bennett’s statement sparked some confusion as it seemed to indicate a significant break from the status quo that has existed at the site since Israel reunified Jerusalem in the wake of the 1967 Six-Day War. The Islamic religious trust that administers the site does not permit Jews to pray there, and Israeli security forces have enforced their wishes.

However, Bennett quickly tweeted, both in Hebrew and in Arabic, that the latest events do not reflect any change to the policy of prohibiting Jewish religious practices in the plaza.

All was quiet by the time Muslim noon prayers were held on Sunday, but the morning’s events drew condemnation from the Palestinian Authority.

In a statement, the P.A. said it held “the Israeli occupation government fully responsible for the escalation resulting from the Israeli incursion in the al-Aqsa mosque complex in occupied Jerusalem.”

The P.A. called the Jewish visits provocative and a “serious threat” to “security and stability.”