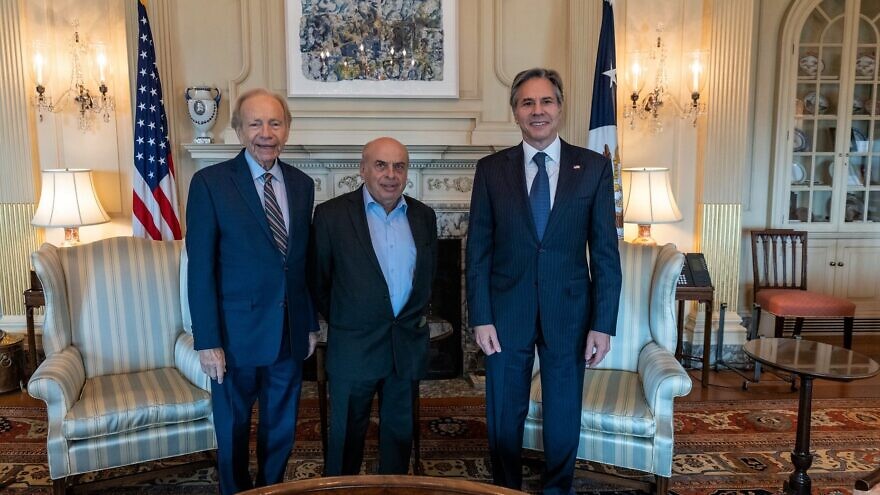 Representatives of the supervisory board of the Babyn Yar Holocaust Memorial Center Natan Sharansky and former Connecticut Sen. Joseph I. Lieberman met on Thursday with the U.S. Secretary of State Antony Blinken in Washington, D.C.

“We are grateful for such a warm and friendly welcome,” said Sharansky, head of the board. “The United States plays a leading role in protecting and promoting human rights and democratic values. The fight against anti-Semitism, manifestations of xenophobia and intolerance, for me, is a marker of humanity’s development.”

He continued, saying “we were pleased to inform the secretary of state about the progress of the project of memorializing victims of the Holocaust by bullets, which is extremely important for Ukraine and all of Eastern Europe. Babyn Yar in Kyiv is the most famous symbol of this international tragedy.”

Sharansky, perhaps the most famous of Soviet refuseniks who spent years in the gulag, noted the support of Ukraine President Volodymyr Zelensky in regards to the memorial and museum complex. “The memory of the victims of the Nazis was erased by the Soviet regime for half a century. But now, with Ukraine gaining true independence, we see real changes,” he said. “The memorial will help preserve the memory of the victims while teaching new generations, developing them and changing the world for the better.”

“It was an honor to meet renowned Soviet dissident and human-rights defender Natan Sharansky,” he posted on Twitter. “The United States echoes his call for the release of political prisoners around the world, and we join him in condemning anti-Semitism in all its forms.”