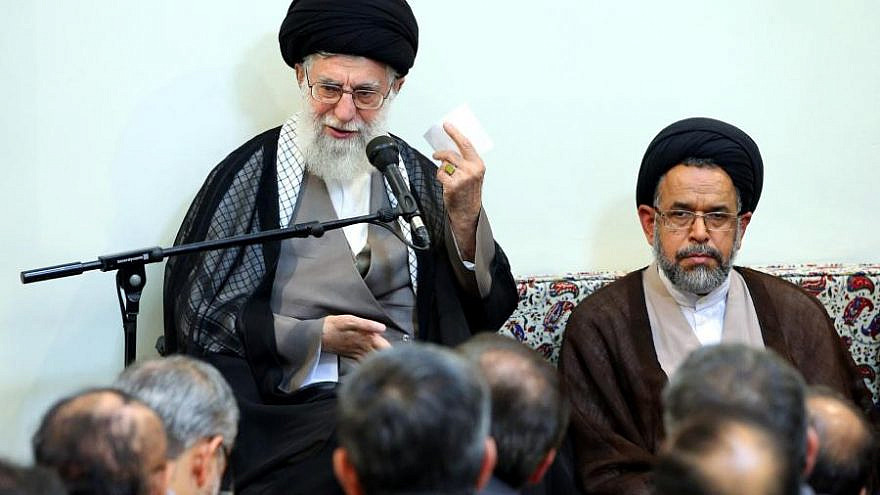 Iran’s Tasnim news agency (affiliated with the Islamic Revolutionary Guard Corps) has strongly criticized Iranian Intelligence Minister Mahmoud Alavi over his remarks in a television interview regarding the future of Iran’s nuclear program and the investigation into the death of nuclear scientist Mohsen Fakhrizadeh.

In the live interview, which aired on Feb. 10, Alavi warned that Iran might be “pushed into” a military nuclear program.

“Iran’s nuclear program is for peaceful purposes, and the Iranian supreme leader even stated in a fatwa [Islamic religious ruling] that the production of nuclear weapons contravenes religious law, and Iran will not try to obtain it and considers it a prohibited weapon,” he said. However, he added, “I must make it clear that if a cat is pushed into the corner, it may behave differently from a cat that walks freely. If Iran is pushed into a corner, it will not be its fault [i.e. the pursuit of nuclear weapons] but rather the fault of those pushing it.”  Under “normal circumstances” Iran has no such intention, he said.

He added however that “once we decided, in line with the supreme leader’s orders, to begin [uranium enrichment] to 20 percent, we did it. Our nuclear capabilities remain intact, and our nuclear industry operates in full force. Our R&D has made the IR-6 [advanced centrifuges] operational to produce enriched uranium. Each IR-6 centrifuge does the work of 10 old [IR-1] centrifuges. It needs less space but has higher output.”

“Only two hours after the event, officials began to criticize the functioning of the Intelligence Ministry without even knowing what the ministry’s role in the investigations was,” said Alavi.

Alavi denied claims that his ministry had estimated the time and location of the assassination yet had failed to prevent it, saying, “We didn’t have an accurate estimate of the timing of the incident. We correctly estimated the location of the assassination. We asked the relevant elements of the armed forces to do the intelligence work and meet with us on the subject because the traitor who prepared the ground for the assassination was a member of the armed forces. We asked them to come sit down and work on the case, but unfortunately, before their representative began his joint work with us on the case, the incident had already taken place.”

Tasnim wrote in response to the interview that the minister had made “a major blunder” and not thought deeply about the implications of his “grave” remarks. His “predictions” about the future of Iran’s nuclear program, it said, had “astonished” the country. In addition to being “very wrong” in themselves, his comments “do not reflect the policies of the Islamic Republic, contradict the declarations of the Supreme Leader of the Revolution, and may have serious consequences for the state,” it continued.

“If Minister Alawi has a personal opinion on important issues in the country, he can keep it to himself or present it on his behalf as an ordinary person only after he has no state responsibility. But as long as he heads such an important office as the Ministry of Intelligence, he may not speak without paying attention to the consequences of his words or what is said in the name of the Islamic Republic,” said Tasnim.

The IRGC-affiliated agency went on to state:

“The opposition of the Islamic Republic, the Supreme Leader of the Revolution, and the other state leaders to producing and using an atomic bomb is not a hypocritical position and has not been said just to please or deceive the West. Therefore, there is no need to create such a pressure point by someone talking about the possibility of assembling a bomb under special circumstances. The arguments of the Islamic Republic and the Supreme Leader of the Revolution, raised frequently in speeches are clear and logical.

“What would Iran want to achieve by producing a bomb? Does Iran want to use such a bomb? Absolutely not. How can the state use an atomic bomb when the Supreme Leader reiterates moral and religious limits even during the most difficult battles?

“The use of atomic bombs and weapons of mass destruction can lead to severe consequences on civilians and even against nature. Non-compliance with religious and moral orders is fundamentally contrary to the fundamental philosophy of establishing the Islamic Republic. When the most important general of the revolution [Qassem Soleimani]—even on the battlefield and on the front lines of the war against Islamic State—worried about the food of the animals in the vicinity, how can the state use a nuclear weapon or any other weapon of mass destruction?

In a recent interview on Lebanon’s Mayadeen TV, former Iranian diplomat Amir Mousavi clarified the fatwa issue: “A fatwa is not permanent, according to the Ja’afari Shi’ite jurisprudence. A fatwa is issued in accordance with developing circumstances. Therefore, I believe that if the Americans and Zionists act in a dangerous manner, the fatwa might be changed.”

Tasnim went on to state that Alavi’s remarks were “completely contrary” to Iran’s national interests in that they might “strengthen the West’s pressure points in the [nuclear] negotiations, and more importantly … legitimize the Americans’ brutal sanctions.”

One the subject of Alavi’s remarks with regard to the assassination of Fakhrizadeh, the news agency said:

“Even on the subject of the minister’s remarks about the assassination of the scientist, there are some important points that show that the minister may not have thought carefully about the aspects of his statements. Public opinion cannot judge the correctness of his claim, which is controversial and contrary to security regulations.

“His words on the subject are a mistake. The greater damage is that his statement places the blame for the incident inward while the blame falls on outside enemies. What’s the point of dragging the conflict inside? What’s more, if other intelligence organizations in the country want to defend themselves in this area, many issues will be said and exposed, and the disadvantages outweigh the advantages.

“Second, suppose that all the minister’s words about the assassination of Fakhrizadeh are totally accurate. Public opinion will ask: if the Intelligence Ministry knew where the assassination would take place, why didn’t the ministry keep the area under tight surveillance 24 hours a day? Wasn’t Fakhrizadeh important enough for the Intelligence Minister to issue an order closely monitoring where the enemy planned to kill him?

“Third: if the minister believes that he can exonerate his office on charges of negligence and lay the blame on other bodies … then he is wrong. The reality differs from this view. Society doesn’t differentiate between the regime’s various intelligence bodies but considers them as a whole, that protects the nation’s security. Does such a statement by the minister promote and reinforce the sense of security or weaken it? Society sees the person in charge of the Intelligence Ministry as very important—who then presents the other intelligence bodies as negligent organizations while he exonerates the office he is in charge of.

“Fourth, one has to ask the minister whether the assassination case has been so fully investigated by the highest levels of the country’s security organizations that he has already taken a sweeping position on the issue in front of the public.”

Despite the fierce criticism leveled at Alavi and his ministry, however, it is unlikely that such a statement could have been made without the approval of the Iranian leader. Moreover, Alavi’s remarks appear to be part of a series of pressure tactics being exerted by Iran on the Biden administration, with the aim of getting the United States back to the framework of the 2015 nuclear deal framework. A spokesman for the U.S. State Department responded to Alavi’s remarks, saying, “It’s not yet clear to us that Mahmoud Alavi was speaking for anyone but himself. We took note of those remarks. They are very concerning.”

Iran is trying to put pressure on the Biden administration to lift all sanctions before Tehran agrees to end its violations of the nuclear agreement, especially in the field of uranium enrichment. It should be emphasized that on Feb. 21, 2021, the ultimatum issued by the Iranian Parliament to lift the sanctions will expire, and Iran may suspend some inspections of its nuclear sites by the International Atomic Energy Agency.

Furthermore, the Iranian intelligence minister’s remarks reflect ongoing internal power struggles within the Iranian security and intelligence apparatuses following a series of assassinations of Iranian scientists and the sabotage of sensitive Iranian nuclear facilities, such as the centrifuge manufacturing plant in Natanz, and the ongoing struggle between the Intelligence Ministry, which operates within President Rouhani’s government, and the IRGC, which has the support of the Iranian leader.

IDF Lt. Col. (ret.) Michael (Mickey) Segall, an expert on strategic issues with a focus on Iran, terrorism and the Middle East, is a senior analyst at the Jerusalem Center for Public Affairs and at Alcyon Risk Advisors.