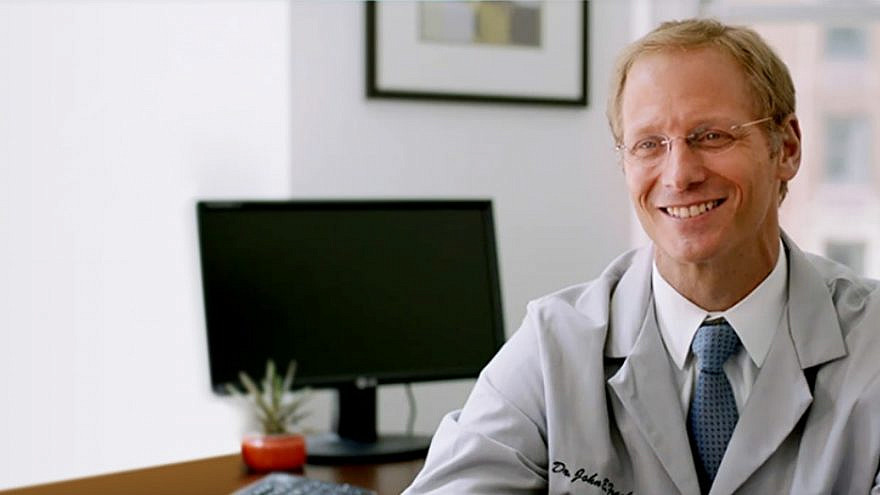 When campers at Ramah Sports Academy in Cheshire, Conn., visit the infirmary this summer, they will get more than Band-Aids, throat lozenges and TLC from Dr. John Frank. They may also hear stories from the nice Jewish boy who began his medical studies while playing tight end with Joe Montana on two NFL Super Bowl San Francisco 49ers teams from 1984 to 1989. Campers may also learn that Dr. Frank was a founder of the Israel bobsled team.

Adam Benson and Graham Parker of New York City were thrilled when they learned their football-loving son, who is attending Ramah Sports Academy for the first time, would cross paths with Frank. Adam reports, “Max lives for football, and we think it is awesome that Max will be cared for by a camp doctor who is also a former NFL player.”

Camp director Rabbi Dave Levy could not be happier with Frank joining his staff this summer. “I was speaking with a pediatrician from Columbus, Ohio, whose two sons go to camp, and he said, by the way, I have a friend who might be up for coming to camp.” Frank, who splits his time between his practice in New York and his home in Columbus, is a board-certified otolaryngologist (ear, nose and throat doctor), as well as a diplomate of the American Board of Hair Restoration Surgery. He has treated more than 10,000 patients for hair loss and performed more than 2,500 hair transplants.

“I am excited to have him as a camp doctor and to use his football experience to create a positive experience for campers,” says Levy. “He will lead a multi-day flag-football experience and talk with the camp divisions about his NFL experiences, including what it was like being on a historic team in the 1980s and being Jewish in the NFL, and about whether it is worth the risk of playing football in its current form. I am excited to have the whole package; he is the embodiment of what our camp is about—Jewish life, sports and bringing those two things together!” 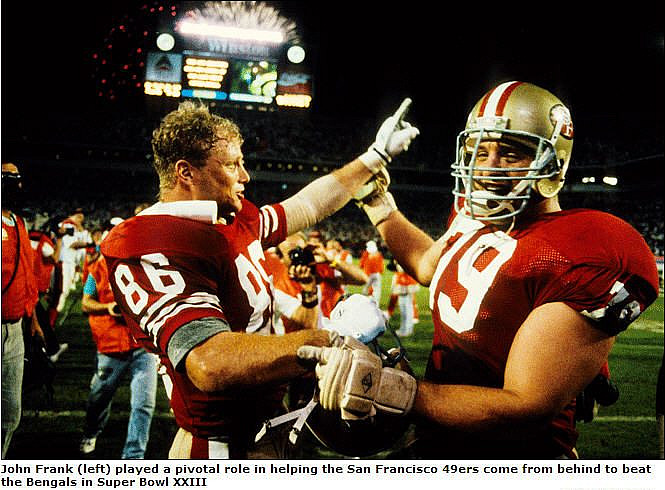 ‘A strong legacy to uphold’

Frank grew up in Pittsburgh, attended Hebrew school and celebrated his bar mitzvah at Beth El Congregation of the South Hills. He reports, “I was into and not into Hebrew school, but was very much into learning for the bar mitzvah.”

He refers to his father, Alan, as “a celebrated athlete and Pittsburgh Jewish sports legend,” saying he “was a fantastic basketball player in college at Carnegie Tech,” which later became Carnegie Mellon University, and “a strong legacy to uphold.”

When it came time for John to become involved with sports, his mother was lukewarm at best with his desire to play football. His parents and grandparents insisted on examining his peewee football equipment to ensure they provided adequate protection. “I think my mother was terrified by the whole experience,” he recalls.

At every stage of Frank’s sports career, he was aware of just how good an athlete his father was. He feels his father “had it” innately, while he was “only an average football player until my senior year of high school. It just seemed to click.”

The starting tight end at Ohio State from 1981 to 83, as well as a two-time Academic All-American, he caught more passes than any other tight end in the school’s history; became the team’s most valuable player; and was selected as a member of the All-Century Ohio State Football Team and Ohio State’s Varsity Hall of Fame.

Then Frank was invited to attend “the Combine,” the NFL’s major recruiting event and tryout in 1984, but he declined so he could study for final exams. Much to his surprise, he was drafted in June 1984 in the second round of the NFL draft by the San Francisco 49ers.

‘You know you are different’

In “NFL Films Presents,” Frank recounts the funny, somewhat embarrassing story of the telephone call from the 49ers coach. “Bill Walsh drafted me in the second round. I never anticipated playing in the NFL, so I didn’t know who he was. When I was in college, I wasn’t following the NFL—I was a chemistry major on the way to medical school. When the phone rang, he said it was the head coach to say congratulations. The only Coach Welsch I knew was the coach of Army at the time [George Welch]. I said, ‘Hi, Coach Welsh. He said, ‘No John, Coach Walsh. See you when you get out here.’

When Frank arrived at training camp, he was unfamiliar with the 49ers organization and didn’t know much about players on the team, though said he “had heard [quarterback] Joe Montana’s name since he was from Western Pennsylvania where I was from.”

He caught on to the organization and the team’s playbook quickly. His first catch in the NFL was for a touchdown at the Meadowlands in New Jersey during a Monday Night Football game. 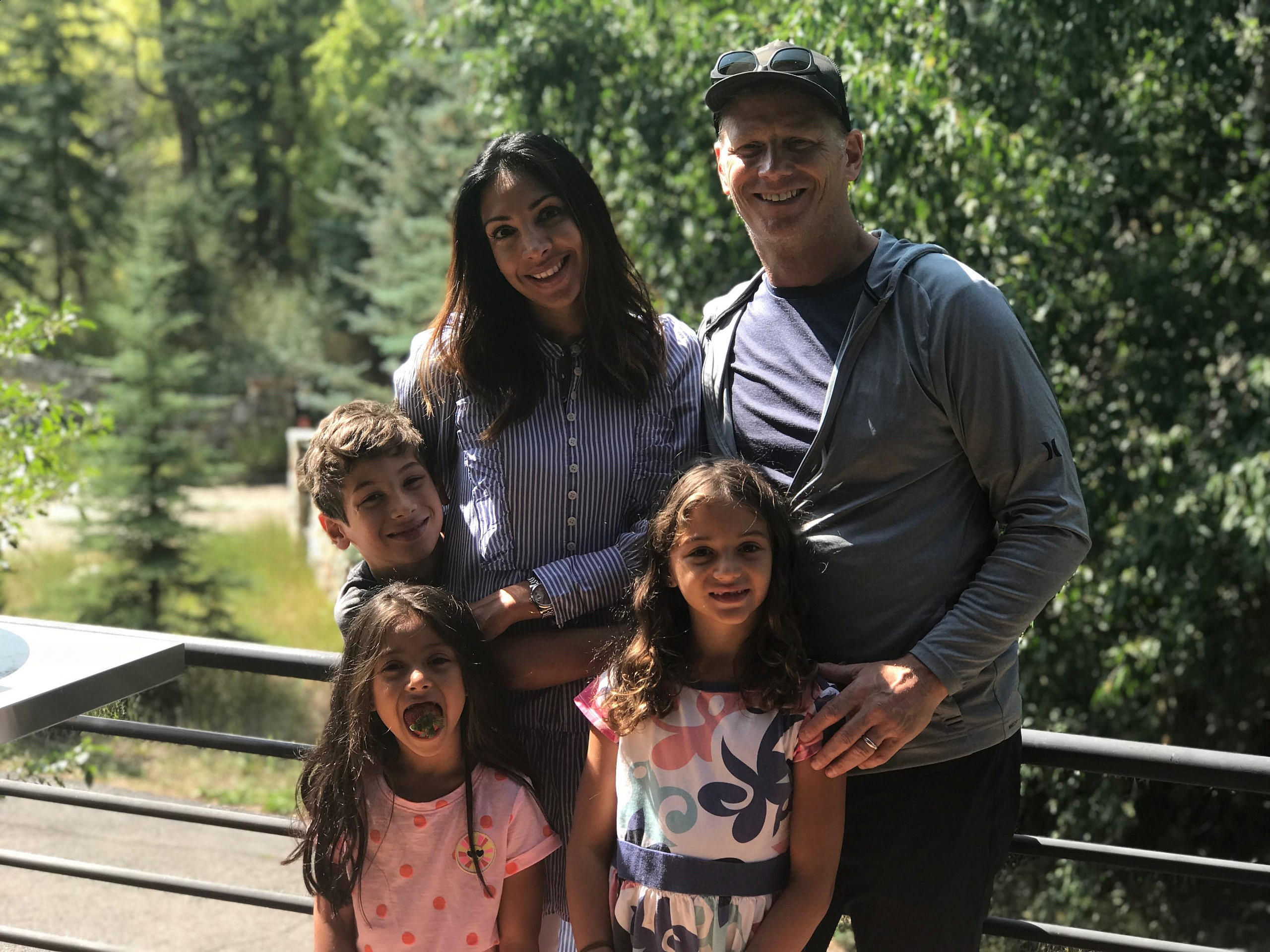 Frank wasn’t the only Jewish player on the legendary 49ers team, which consisted of players from various religious backgrounds. “Harris Barton, the all-pro tackle, was the other Jew. We bonded. We had something special. We had fun on the team.”

While Frank says that he never experienced any difficulties being Jewish and notes that at the professional level, “it is a business,” and everyone is focused on the job, he observes: “When you are a Jewish athlete in the NFL, you know you are different.”

In fact, he recounts a touching story of Coach Walsh’s sensitivity. When Walsh read a story about anti-Semitic graffiti on a local San Francisco synagogue, he reached out to his player. “He pulled me aside, said he heard about the graffiti and said if you need to talk about the impact it is having, we are here. He was very sensitive,” remembers Frank.

During Frank’s first NFL season, he mostly worked as a reserve tight as the team went 18-1 and defeated the Miami Dolphins in Super Bowl XIX. He saw limited action due to an elbow injury. By his fourth season, he became the starting tight end. In his fifth and final season, he played in Super Bowl XXIII. He caught two passes, including one thrown by Montana during the winning touchdown drive. Following the game and to the surprise of many, Frank announced his retirement to devote himself full-time to medical school. During his five-year pro career, he caught 65 passes for a total of 662 yards.

Frank earned his M.D. from Ohio State in 1992 and completed his training in Chicago. He then established a plastic surgery clinic in San Francisco, specializing in cosmetic facial plastic surgery and hair transplantation. The NFL film, “Why John Frank, M.D., Choose Medicine Over a Career in the NFL” featured on Frank’s professional website shows his gentle touch and playful banter with a patient who consults with him for an ear problem. He notes that on occasion, patients learn his “back story” and ask about his NFL career.

Frank, who also holds Israeli citizenship, notes that the bobsled team made it to the world championships in the early 2000s.

For now, he is getting prepared for and even excited about Ramah, just as campers look forward to returning after a year of too much time inside. “I am looking forward to being outdoors in the summertime, to be with my son, and to be around Jews and sports.”