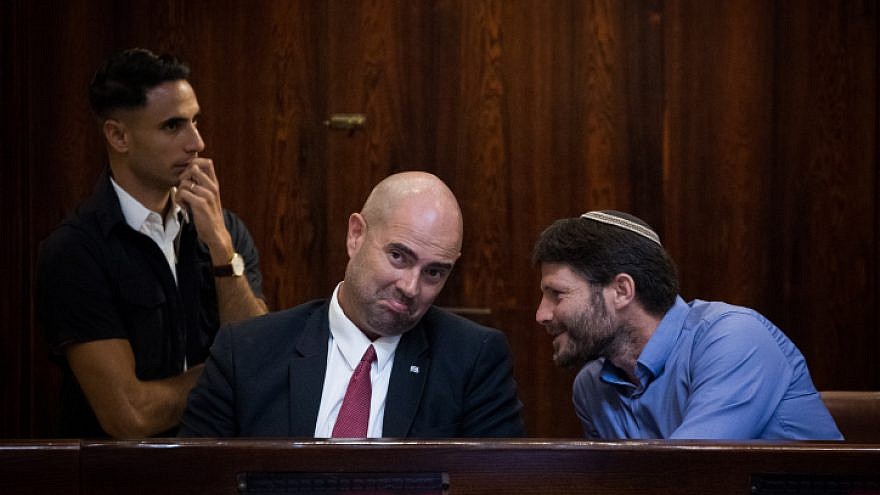 Despite the dissolution of the 21st Israeli Knesset in late May after Israeli Prime Minister Benjamin Netanyahu could not manage to get a coalition together, a caretaker government continues to administrate the country until the scheduled Sept. 17 elections. Still, Netanyahu has needed to fill a number of ministerial vacancies as per Israeli governmental requirements and to shore up his cabinet ahead of elections. Two recent appointments of interim ministers, however, have stirred up a bit of controversy.

Amir Ohana of Likud was tapped to head the justice ministry and Bezalel Smotrich of the United Right was picked for the transportation ministry; both have been met with objections by the left and the right. The main point of contention seems to be Ohana’s statements regarding Israel’s left-leaning Supreme Court, and Smotrich’s extreme right-wing and religious views.

That reality, however, didn’t stop the new appointees from raising eyebrows, forcing the prime minister to counter their controversial statements.

An attorney by trade and a former official in the Shabak (Israel Security Agency), Ohana, 43, is considered to be loyal to Netanyahu and supports changing the law to grant acting prime ministers immunity from indictment. He is also Israel’s first openly gay minister.

The ultra-Orthodox parties expressed their discontent with an appointment to the justice ministry for someone from the LGBTQ community since this particular position  could be used  to advance gay rights. Nevertheless, Netanyahu reportedly promised that this was simply an interim appointment that would not continue past the formation of the new government following the second round of elections this fall.

Netanyahu already distancing himself from appointees

It was Ohana’s comments regarding the Supreme Court that caused the most controversy.

During his first interview as interim justice minister, Ohana told Israel’s Channel 12 news that in situations where lives were at stake, he did not believe that all Supreme Court rulings must be adhered to.

He gave the specific example of a 2004 Supreme Court ruling that refused to allow the military to destroy several Palestinian buildings along the Kissufim route in the Gaza Strip. Terrorists then used the building to murder a pregnant woman, Israeli Tali Hatuel, and her four daughters. In that instance, he said, “the ultimate consideration has to be preserving citizens’ lives.”

Despite the clear and limited context, the very suggestion by a sitting justice minister that a court decision be ignored set off a firestorm of criticism, led by Supreme Court Chief Justice Esther Hayut and Attorney General Avichai Mandelblit. This prompted Netanyahu to distance himself from his new appointee via a tweet that stated directly and succinctly that “court decisions are binding upon everyone.”

Ohana then issued a statement clarifying that he was referring to an extreme situation and that, in general, all court rulings must be respected.

But not everyone felt that Ohana said something that needed an apology. Likud Knesset member Keti Sheetrit told JNS that she dismissed the criticism against Ohana, saying, “He has strong beliefs, but they all have the goal of help Israel thrive as a Jewish and democratic state, with balance between the three branches of government.”

As for Smotrich, the interim transportation minister and leader of the National Union that ran as part of the United Right Party, has generated an even greater reaction from his peers.

The 39-year-old certified lawyer and father of six from Kedumim openly sought the justice ministry portfolio, saying that he wanted to “restore the Torah justice system,” implying his intention to shift Israel to a theocracy. Netanyahu was quick to tweet in response that “the State of Israel will not be a halachah [Jewish religious law] state.”

The new minister, however, doubled down on his ideology, declaring in one of his first interviews that he “works for God and not Netanyahu.”

Smotrich had actually hoped to be given the justice minister post, and only accepted the transportation portfolio after Netanyahu sweetened the deal by offering him a spot in the security cabinet.

Smotrich has been very clear regarding his beliefs on security matters, such as resettling the Gaza Strip, which Israel vacated in 2005; calling for annexation of the entire West Bank; advocating against a Palestinian state; and pushing for stronger response by the Israel Defense Forces to Palestinian violence.

Knesset member Tamar Zandberg, leader of the Meretz Party, criticized the prime minister for “including a messianic warmonger in Israel’s [Security] Cabinet.”

Yair Lapid, who serves as number two in the Blue and White Party, tweeted that “to give Smotrich a role in steering Israel’s security shows that Netanyahu can no longer distinguish what’s good for the state from his personal needs.”

But former deputy minister Ayalon told JNS that these responses are just pre-election politicking, as “one minister in the security cabinet cannot influence the country’s security policies in the current situation. Usually, a minister can have more influence if he has the power to bring down a government if he doesn’t get his way. That threat doesn’t exist with an interim government heading to elections anyway.”

Ayalon acknowledged, however, that if Smotrich remains in the Security Cabinet after the September election in a new permanent government with a narrow majority, he could indeed influence policy.

Smotrich’s adviser, Eytan Fuld, told JNS that while his boss “has been maligned by the mainstream media and his political foes, this won’t stop him from continuing to work towards a safe and secure Israel. Bezalel is a caring and loving person  who cares deeply about the Jewish people and Israel, and that is what governs his public work.”

In what appears to be an acknowledgement of the reality that these appointments are more political than a game-changer in terms of policy, Deputy Defense Minister and United Right Knesset member Eli Ben-Dahan told JNS that he is “very happy with the ministerial appointment for Smotrich. The appointment strengthens the stature of the religious Zionist movement as we approach the upcoming elections.”

Most in the Israeli political realm believe that Ohana and Smotrich will be appointed as ministers in the permanent government that will be formed after the September elections but that neither will continue in their current interim portfolios.