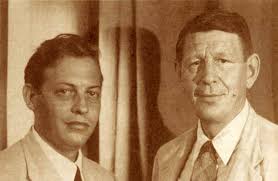 Chester Kallman, a poet and librettist who became the great W. H. Auden’s lifelong companion, was born in Brooklyn on this date in 1921. The two of them wrote the libretto for Igor Stravinsky’s The Rake’s Progress and several other musical works. Auden, although gay, had a “lavender marriage” with Erika Mann, Thomas Mann’s Jewish daughter, to enable her to escape Nazi Germany in 1935. He met Kallman four years later, when the American was 18 and Auden was 32. Kallman’s pronouncedly “out” identity helped liberate Auden from ambivalence about his own homosexuality. Their relationship was stormy but endured until Auden’s death in 1973. Auden’s poem, “Funeral Blues” (“He was my North, my South, my East and West,/My working week and my Sunday rest”) has been read at many, many gay funerals, but whether Kallman was its subject is uncertain, since he outlived Auden by nearly two years.

“The stars are not wanted now: put out every one;/Pack up the moon and dismantle the sun;/Pour away the ocean and sweep up the wood./For nothing now can ever come to any good.” —W.H. Auden