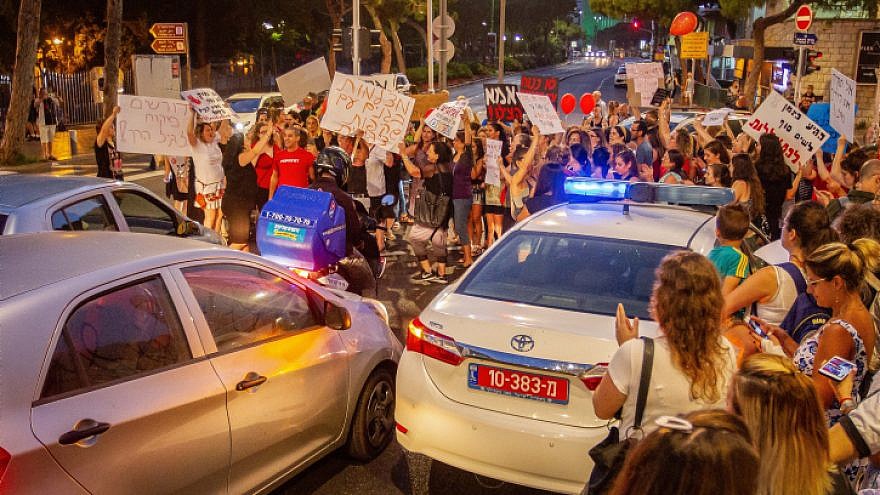 Chanting “the country demands justice for the children” and other slogans, thousands of Israelis protested in some 25 locations around the country on Sunday to demand state oversight of day-care centers, amid outrage over a case in which a private kindergarten teacher systematically abused children under her care.

Charges against Mauda, who ran the Baby Love day-care center, accuse her of violence against 11 children, ranging in age from 3 months to 3 years.

She is accused of covering children with blankets and sitting on them to prevent them from moving; forcing children to stand against a wall for hours; lifting toddlers by the arms and throwing them down; shaking babies; hitting and slapping toddlers; and pulling their heads back while obstructing their breathing. In one case, she is even charged with force-feeding a child “the contents of a plate on which he had vomited.”

The footage led to nationwide horror and protests outside Mauda’s home and day-care center, which went up in flames on Saturday in what is believed to have been an arson attack. Currently under arrest, Mauda was not on the premises.

Hebrew media reported that Mauda initially denied the allegations, but told investigators “I am a monster” and “I was Satan here” when presented with the video evidence.

Mauda was allegedly reported by the last of eight different employees she hired and fired in the past year. Another unnamed assistant has also been arrested.