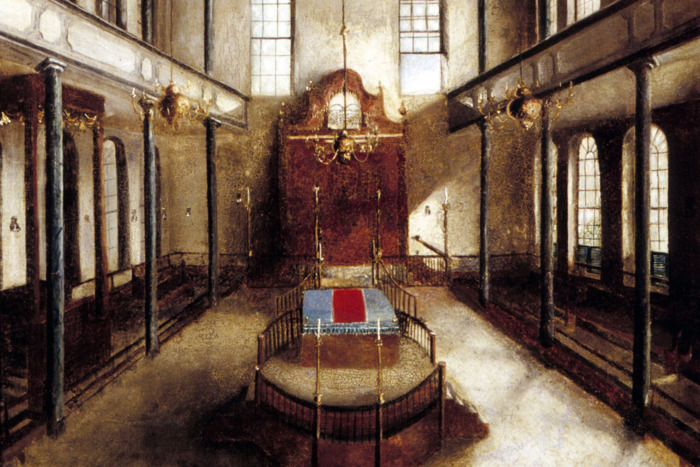 The conventional narrative of Jewish America begins in the 1880s, with the massive influx of immigrants from Eastern Europe to New York and other cities. Their descendants indeed make up the majority of today’s American Jews, but the real story begins much, much earlier and continues across centuries of skirmishes (and at least one riot) over how to be a Jew in the USA. In The Chosen Wars: How Judaism Became an American Religion(Simon & Schuster, August 21), Steven R. Weisman chronicles that history from its earliest colonial days right up to the brink of the great Ellis Island migration. There were a number of turning points along the way; eight of the most critical and contentious follow.

1654: Pioneers
There’s no definitive evidence identifying the first Jew to set foot in the New World. Weisman suggests it could even have been a Jewish convert to Christianity in Columbus’s crew, tagging along on the expedition launched in the same year, 1492, that the Jews were expelled from Spain. What’s clear is that the expulsion led to the first Jewish migration to North America 150 years later. Some members of this new diaspora came via the Brazilian city of Recife, a safe harbor ruled early on by the relatively tolerant Dutch. When the Portuguese conquered Recife, 23 Jewish asylum seekers sailed aboard a French ship to New Amsterdam, arriving in September 1654. Governor Peter Stuyvesant, a less tolerant sort of Dutchman, attempted to expel the “deceitful race” and their “abominable religion,” but pressure from merchants and Jews in the Netherlands prevailed. In 1655, the newcomers established the country’s first Jewish congregation — Shearith Israel (Remnant of Israel) — but anti-Jewish policies prevented them from building their own synagogue until 1730.

1790: The Letter
Shearith Israel may have been the oldest American Jewish congregation, but the longest-standing house of worship can be found in Newport, Rhode Island. Built in 1763, Touro Synagogue was used by the British as a military hospital during the Revolutionary War, then reclaimed by the Jews during the country’s infancy. When George Washington visited Newport in 1790, a local power broker named Moses Mendes Seixas wrote a letter welcoming him on behalf of the city’s Jews. Washington’s reply featured a now-famous passage: “For happily the Government of the United States gives to bigotry no sanction, to persecution no assistance, requires only that they who live under its protection should demean themselves as good citizens, in giving it on all occasions their effectual support.” Weisman reads into that letter “a whiff of conditionality in Washington’s suggestion that the Jews should ‘demean’ themselves as a requirement for citizenship” — an implicit demand, the first of many over the centuries, that Jews fully assimilate.

Before the Civil War, the capital of Jewish life wasn’t New York but a locale you might not associate with the tribe: Charleston, South Carolina. In the early 1800s, the number of Jews living there hovered between 600 and 700, representing some 40 percent of the country’s Jewish population. After a devastating fire destroyed their synagogue, local congregation Beth Elohim raised funds from Jews around the world to rebuild. Designed in the Greek Revival style, the new temple assimilated well among the Gentile banks and churches. It also had another distinctly goyish trait: an organ. Such innovations had been a major source of controversy in Jewish Europe, given the traditional ban on musical instruments in worship services. A cadre of furious congregants sued to have it removed, but South Carolina’s highest court sided with the organ-lovers and established a precedent of noninterference in matters of worship. And so the nascent Reform Jewish spirit, born in Europe, finally reached the Western Hemisphere.

e1850: The Riot
If there’s one figure who stands out in Weisman’s book, it’s Rabbi Isaac Mayer Wise. Born in Bohemia in 1819, Wise landed in New York in 1846 and swiftly became the rabbi of a congregation in Albany. Though he is now regarded as the founding father of North America’s largest Jewish denomination, Reform Judaism, he was less concerned with doctrine than with uniting all of the Jews of the United States — and in that respect, he failed miserably. In fact, in 1850, he got into a fistfight that led to a riot. While visiting Charleston — still America’s Jerusalem — he had disavowed the coming of a literal Jewish Messiah. The prominent Rabbi Isaac Leeser denounced this heresy, and Wise was fired right before the Jewish new year. Wise defiantly went to the synagogue anyway, and came to blows on the High Holiday with the Albany congregation’s president. Many in the crowd, equally fed up with Wise’s innovations, turned the fistfight into a melee. “The people acted like furies,” Wise wrote in his memoir. “It was as though the synagogue had suddenly burst forth in a flaming conflagration.” Though police quelled the uprising, the riot made all the papers. Weisman writes that “the strife in Albany marks an undeniable turning point in American Jewish history, accelerating American Judaism down its path toward division.”

1861: On Bondage
The freedom that Jews enjoyed in the early United States was, of course, not shared by people of African descent. There were Jewish slave owners and slave traders, and wide swaths of the Jewish-American population were opposed to abolition. The best-known Jewish defender of the Peculiar Institution was Rabbi Morris J. Raphall, a Swedish-born and German-educated traditionalist. Just months before the outbreak of the Civil War, Raphall delivered a sermon on the topic to his Manhattan congregation. Though he was a Unionist and, in his words, “no friend to slavery,” he added that black people had been cursed by God as the descendants of the Biblical figure Ham, and that slavery was thus their lot in life. The sermon spread like wildfire and was “widely seen,” Weisman writes, “as effectively giving God’s blessing to the very concept of slavery.” Other rabbis strongly disagreed, including David Einhorn, who called slavery a “moral evil.” Einhorn’s opposition ostracized him in the divided city of Baltimore, forcing him to flee to Philadelphia for the rest of his life.

1879: Hanukkah Returns
As any know-it-all Jewish teenager can tell you, Hanukkah is kind of a bullshit holiday. It commemorates the defeat of an oppressive government at the hands of Jewish zealots known as the Maccabees in the second century BCE. What they don’t tell you in Hebrew School is that the victors turned out to be awful rulers, and the holiday languished in obscurity for centuries. But in 1879, American Jews campaigned to give Hanukkah pride of place on the Jewish calendar. Adolescent smart-asses are familiar with their first argument: that the holiday’s timing made it effective counterprogramming against the increasingly popular Christmas season. But there were also traditionalists behind the revival. As Weisman puts it, Jewish leaders “saw the reestablishment of Hanukkah as an echo of what the Maccabees were trying to do: saving Judaism and even monotheism.” Pre-1879 Jews would be surprised by how secular the holiday is today — and utterly baffled that it’s the poster festival for their modern descendants.

1883: The Scandalous Banquet
Jewish meals are not known as quiet affairs, but rarely has a single dinner led to more acrimony than the one served up on July 11, 1883. Hebrew Union College, the educational pillar of Reform Judaism, had just awarded diplomas to its first class of rabbis — purportedly the first ever to be ordained on American soil. Jews from around the country, as well as Christian clergy and academics, convened in Cincinnati to witness the historic event, then sat down to a nine-course feast. Smiles turned to expressions of horror when the plates came out: frog legs, shrimp, crab, and clams—all very, very non-kosher. At least two rabbis fled the room in disgust; for weeks afterward, Jewish periodicals excoriated the culinary provocation and the Reformers who seemed to be behind it. An aging Isaac Mayer Wise rebuffed the criticisms, calling kosher restrictions outdated “stomach Judaism.” Historians can’t agree on the origins of the so-called Treyfa Banquet (treyf being the Hebrew word for forbidden food). It could have been the caterer’s carelessness, but it had the unfortunate effect of further deepening the divide between old-school Jews and reformers.

1881: Exodus
The most consequential moment in American Jewish life may not have even occurred in America. On March 13, 1881, Czar Alexander II was assassinated by a Russian Gentile, but Jews paid a high price for his crime. After a Jewish woman was implicated in the plot, the Russian government cracked down on Jewish civil liberties. More horrifically, a wave of murderous anti-Semitic pogroms swept across Eastern Europe. More than 2 million Jews from Russia, Romania, and Austria-Hungary escaped to the United States between 1881 and 1914, utterly transforming American Jewry. Prior to 1881, there were only about 250,000 Jews in the U.S., most of them with roots in Central Europe and many of them devoted to some type of Reform Judaism. The new Jews brought with them an Old World emphasis on tradition, closer in line with the budding anti-Reform denomination known as Conservative Judaism. Many also adhered to another new strain of Judaism that called itself by the trendy European term “Orthodox.” What evolved persists today: a Reform-Conservative-Orthodox triptych that represents a defining quality of American Jews — their tendency to disagree.