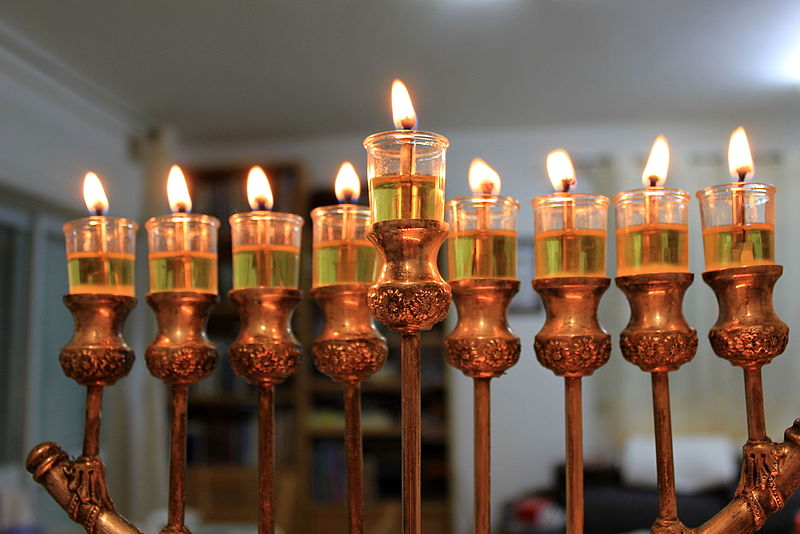 Many of us know the themes of the Hanukkah story: pride in being Jewish; the few against the many; the defeat of our enemy; and the rededication of the Jewish Temple. Or perhaps some have only learned of the miracle of the oil and how it burned continuously for eight days. While these are important themes, there is much more to the Hanukkah story that is at the heart of why we celebrate the holiday and why it’s so relevant today.

Looking at the story of Hanukkah, which happened in the second century BCE, we know that many Jews of that era were assimilated. They wanted it all; they identified as Jews but didn’t want to affiliate, and they were not studying Torah. Some were culturally Jewish—until that, too, was banned. They, like so many today, certainly would have declared themselves “Jews of a different or no religion.”

These Jews, known as Hellenists, emulated everything Greek culture had to offer. In order to be accepted in the halls of commerce and power, they thought that they had to dissociate themselves from their Jewish brothers. Core Jewish values of justice and morality got in the way of the self-preserving and decadent mores of the conquering Greek culture.

But when the non-Jewish ruling government started to clamp down on religious freedom, life became decidedly uncomfortable for their brethren—observant Jews. Forced to do away with Jewish rituals, including brit milah (circumcision), Jewish names, Shabbat, festivals and Torah study, those who hadn’t assimilated were forced to choose between embracing Greek culture or punishment by death.

The other piece of the story, however, is that the pressure to stamp out “hard-line Judaism” came from the Hellenists—the assimilated Jews. They resented the fact that their lives were made more difficult by a minority of their own people who refused to “give up their old ways.”

The Assyrian Greeks, as conquerors of the land of Israel, expected to absorb the Jews, despite the fact that they were indigenous. Not only was it uncomfortable (and not politically correct) for those who wanted to fit in; but the Hellenists (Jews) were just as brutal towards their fellow Jews who refused to fit into the “new reality and morality.”

Those who held fast to their Jewish heritage were “called out” and turned in to the authorities by other Jews. The Maccabees were forced to go into hiding and deal with castigation from their own, in addition to fighting their Greek oppressors.

As we near the Hanukkah season, a time when we celebrate our own Jewish pride, we sadly find ourselves in the shadow of the Hellenists. Fast-forward a few thousand years, and here we are, reading about Jewish employees at Amazon and Google who are leading the charge with a petition to get their respective companies to “call out” their fellow Jews. They are asking for these two corporate giants to renege on a contract with the Israel Defense Forces, which would ultimately compromise the security of the State of Israel—their eventual goal.

Armed with incorrect and erroneous information, the petitioners claim that the use of the government’s cloud storage will cause harm to the Palestinians, and aid and abet Israeli settlement activity in “occupied territory.”

What the petition does not address is that Google and Amazon both have contracts with countries that openly admit to occupying territory. Russia, which occupies part of Georgia and Ukraine; Vietnam, which occupies Cambodia; and others. In other words, these social activists are silent when it comes to human-rights violations around the world.

Both Amazon’s and Google’s signed contracts will help Israel continue to prosper and grow with safety and security, innovating solutions to problems around the world. This is a fact ignored by the United Nations and the majority of the world, with a false narrative of oppression, and misunderstood by the petition’s signatories.

If I am a Jew with no understanding of why that matters or how that makes me part of a family, then I can only distance myself from my own people and culture if I find an opportunity to call them out. This allows me to dissociate with the parts of where I come from that I don’t understand enough to value or know are sources of pride. And, the self-loathing as a Jew that translates into destructive anti-Semitism on this systemic level is more than frightening.

Make no mistake about who is responsible for this lack of understanding and the need to dissociate from the greater Jewish community: We are.

The global Jewish community has known for some time that Jewish education has failed most of its own children. The experiment of passing along nice stories and abstract ideas without context, practice or community has simply failed.

Of the 5.8 million adult Jews in the United States, 1.5 million—or just above 25 percent—identify as “Jews of no religion.” The 2020 Pew study, released in May 2021, tells us that Jews are no longer affiliating with synagogues or even other, secular Jewish institutions.

They have not had positive Jewish experiences. They don’t know what the Jewish religion is about or why it should be a source of pride. They do not know what Jewish wisdom is or why they should.

They do not identify with other Jewish people as the one Jewish family that we are.

We have watched this problem grow and worsen. AISH founder Rabbi Noah Weinberg warned of the dangerous ramifications as far back as the 1970s. Because we have allowed Jews to grow into young adults without Jewish wisdom or understanding of Jewish values, focusing instead on talent, ambition and intelligence—as a way of making a mark on the world—we see the devastating rise of attacks on other Jews. Tragically, it is inevitable.

While I am sure that many of the young, misguided activists involved believe that they are innovative and trailblazing, they could sit down with the thousands of Jews that the Maccabees had to fight so many hundreds of years ago and hear the power of their hindsight. They might wring their heart upon learning just how wrong—dangerously wrong—they are, but should this scenario actually be able to take place, they would rightfully turn to us and ask: “Why didn’t you teach us to know better?”

And they would be right.

I have every faith that the cloud-storage contract will move forward as planned. And should Google and Amazon not merit working with Israel, another company will. Even if Israel has to build its own storage or contract with a smaller David instead of a Goliath, someone else will make that money and help Israel continue to be a source of good. It may take longer, but it will happen.

Sadly, it may be too late to bring any kind of understanding to many of those who signed this petition or to their peers. It is Judaism’s core values that are the true path to justice, righteousness and human dignity, and the path to actually end oppression in the world.

But it is never too late for those who will come next. And when they turn to us and ask why we didn’t teach them to know better, what will our answer be?

For those of you who still haven’t read, seen or heard, there have been many changes at Aish. We are laser-focused on standing up and taking responsibility for conveying and sharing Jewish wisdom, trying to reach a staggering number over the next decade so that they can “know better.”

This requires out-of-the-box creativity, including massive initiatives on social media. This is where the next generation of leaders, thinkers—and Google employees—digest their information.

Once we manage to break through the constant cacophony of too much digital information, where do we take those who are curious? We at Aish are working on developing content that effectively gives a “customer journey,” allowing people wherever they are, regardless of background, access to timeless Jewish wisdom. Some others are, too, but we know it’s not enough.

As a Jewish community, we have to wake up and deal with the situation as the emergency that it is. We must connect the attacks on Israel, the attacks on Jews, the embarrassment in public and in private, in admitting one is a Jew in America today as the urgent, threatening state that it is. We cannot continue to ignore the lack of Jewish literacy and the growing anti-Semitism coming at us, even and especially from our own brothers and sisters.

It’s not only that our own are turning on their Jewish family. It’s not only that the Jewish people’s homeland faces daily attacks from our own. All of this is true. But we are also failing those who are choosing to attack us, and we have the power to bring change.

Rabbi Steven Burg is the CEO of Aish and on the board of governors of the Jewish Agency.