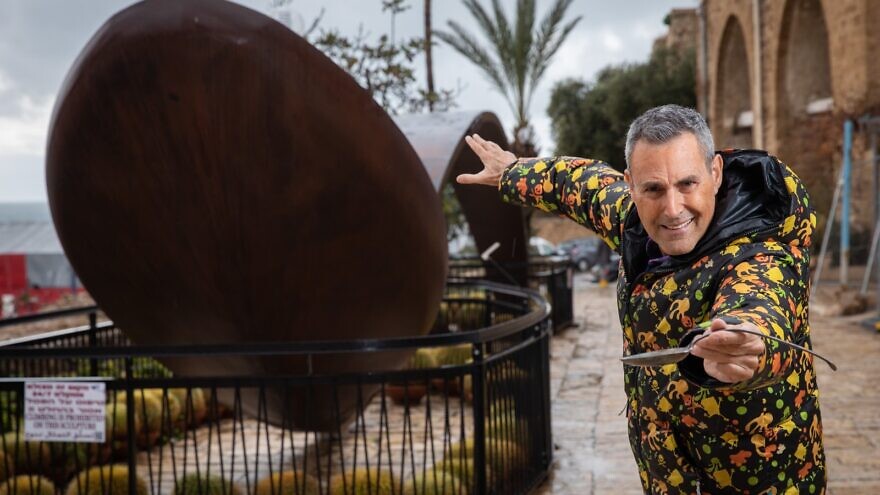 Bending spoons through psychokinesis is, after all, the trademark of world-famous mystifier Uri Geller.

“Ninety percent of the items you see here were gifts from people throughout my career,” says Geller, who relishes telling the stories behind these presents. Some were sent especially for the museum, like guitars from the Rolling Stones and Moody Blues.

The charm and charisma that won him friends and admirers in high places remain as infectious as ever. He was generous with his time and attentively answered my questions via WhatsApp before and after our tour.

Born in Tel Aviv in 1946, Geller was fresh out of the paratroopers—in which he’d fought in the 1967 Six-Day War—when he began giving highbrow house parties to earn some cash.

A born entertainer, he wowed judges and generals with his paranormal powers (or his masterful illusions, depending on whom you ask).

At one of these parties, he persuaded Golda Meir to draw a picture behind the closed door of the bathroom to prove he could read her mind. “I think I am the only person who ever sent a prime minister to the restroom on command,” he says with a laugh.

Some other guests turned out to be agents from the Mossad, Israel’s national intelligence agency.

“They were desperate to find out how I could bring them information in an unconventional manner, so they asked the CIA to test my powers,” he relates, “and they sent astronaut Edgar Mitchell to convince me to come to Washington. We became very good friends.”

Mitchell introduced Geller to former Nazi rocket scientist Wernher von Braun at a secret NASA base. Geller has photos displayed from their meeting, taken by his best friend and brother-in-law, Shipi Shtrang, who also was at the museum when I visited.

A distant relative of Sigmund Freud’s, Geller has seen his likeness on everything from a Pokémon doll to a “Daredevil” Marvel comic book.

Among the rare treasures in his museum: a gold “egg” that John Lennon told Geller he received from an extraterrestrial being; a jacket signed by Michael Jackson; a 1-ton crystal, supposedly millions of years old; a model airplane gifted, oddly enough, by Libyan despot Muammar Gaddafi.

Geller showed me the personal binoculars of assassinated Israeli Prime Minister Yitzhak Rabin. “This is very precious to me because he was my mefaked [commander in the Israel Defense Forces],” says Geller.

The eclectic collection continues with a picture of him next to Jeff Bezos, a letter from Jackie Kennedy Onassis and the first Baby Bamba doll ever made. 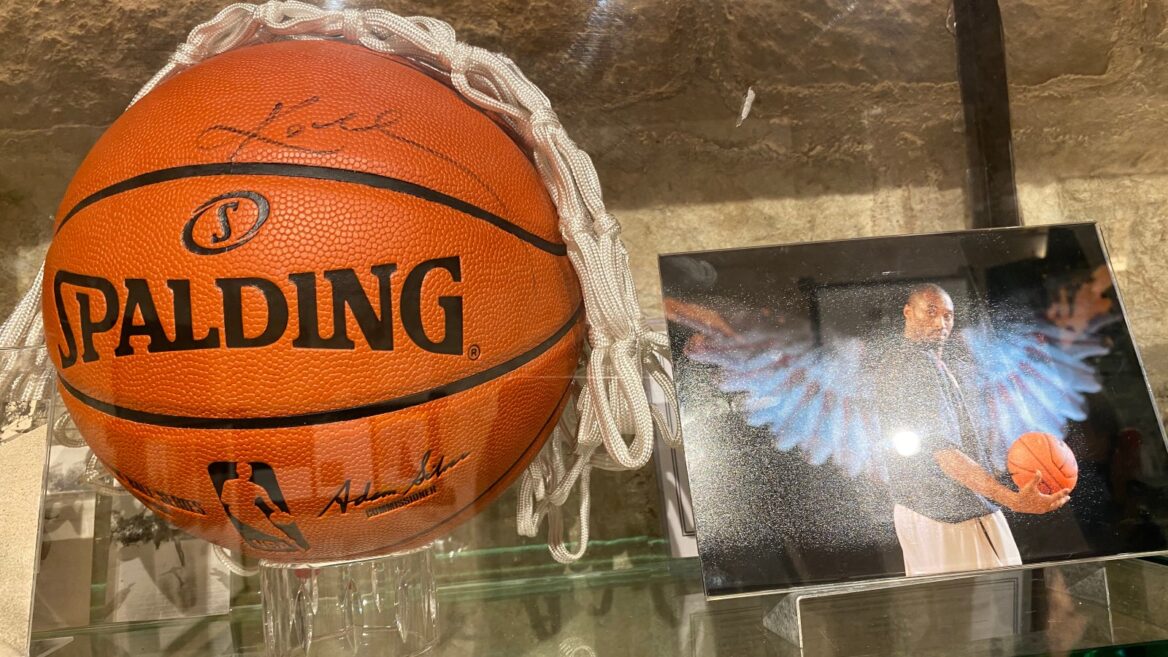 “This is incredible,” he says, pointing to a work shirt in a display cabinet. “This is a shirt that David Ben-Gurion wore, probably straight out of the laundry room at Kibbutz Sde Boker. The amazing synchronicity here is that when he wore this shirt, I was Ata’s model!”

I peered through a microscope to see British micro-artist Graham Short’s carved likenesses of Geller, Michael Jackson and a bent spoon on the head of a pin.

A ventriloquist’s dummy given to Geller by Israeli pop star Noa Kirel when they served together as judges on “Israel’s Got Talent” reposes on a spoon chair made for Geller by Kellogg’s cereal company after he did a commercial for it. 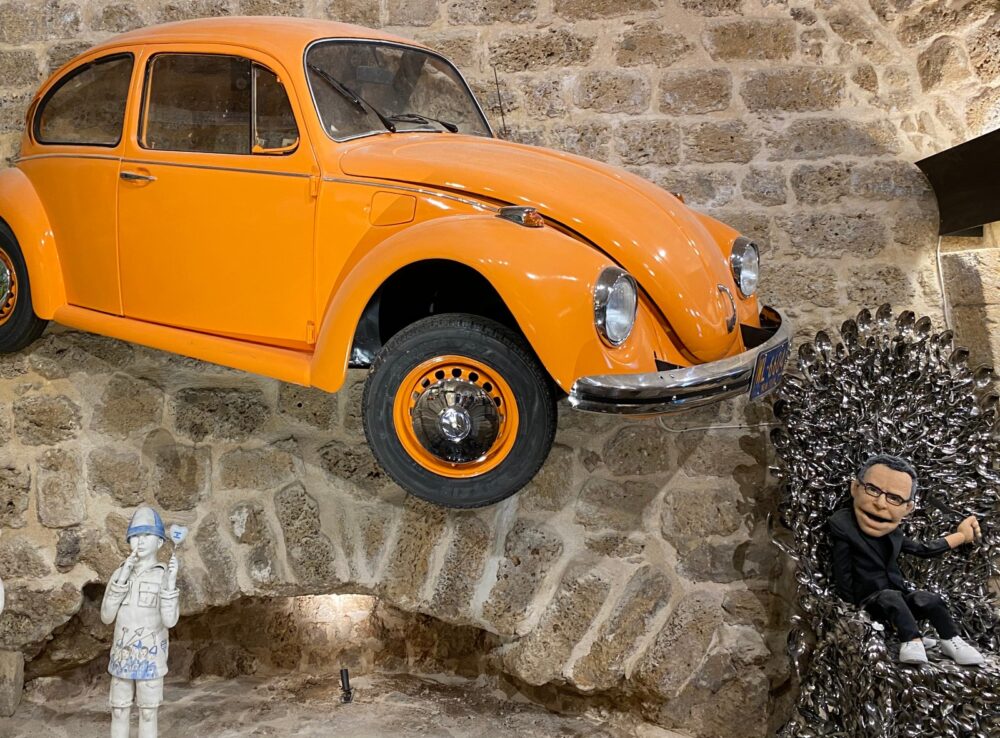 At right is a spoon chair made for Uri Geller by Kellogg’s, with a puppet gifted to him by Noa Kirel. At left is part of Geller’s first car, a Volkswagen Beetle. Credit: Abigail K. Leichman.

Geller says he never intended to have a museum.

When he and his wife, Hanna, moved back to Israel about five and a half years ago, they settled into an apartment that they’d bought in Old Jaffa from art collector Ilana Goor in 2006, when Geller was hosting a reality show that launched the career of mentalist Lior Suchard.

A real estate agent approached Geller on the street and urged him to see a space available next to Goor’s own (highly recommended) museum.

Opening the old tin doors, Geller saw a vaulted stone hall filled with gravel and dirt. Instantly he decided to ship his one-of-a-kind possessions from Sonning and display them here.

The building dates from the 18th-century Ottoman period and apparently was used for storage. Israel Antiquities Authority archeologists were present during the $6 million renovations when workers discovered a 19th-century olive-oil soap factory beneath the floor.

The museum also houses some of Geller’s own works of art.

He designed NSYNC’s logo, the cover of Michael Jackson’s “Invincible” album and many pieces of Poole Pottery, a brand favored by Queen Elizabeth. Geller’s drawings and prints can be purchased on the museum’s website.

Next to an Andy Warhol painting given to Geller by a billionaire is a pop-art work he commissioned from Tel Aviv-based Yuval (“Yuvi”) Gold showing some of the celebs whose gifts are exhibited here.

Hanging above all that is a painting of Jesus.

Geller explains: “In the early 1970s, Salvador Dali asked to meet me. He had painted bent spoons in the 1930s and didn’t believe I could really bend spoons. So he brings me a gold spoon. He holds it in his hands, I place my finger on it and it bends. That freaks him out. But we became best friends and he gave me lots of gifts.”

One of those gifts was a crystal ball that Dali told Geller had belonged to Leonardo da Vinci.

“I didn’t believe it,” says Geller. “I accepted it politely and put it on the roof of my Cadillac, which went to many museums including the Israel Museum.” 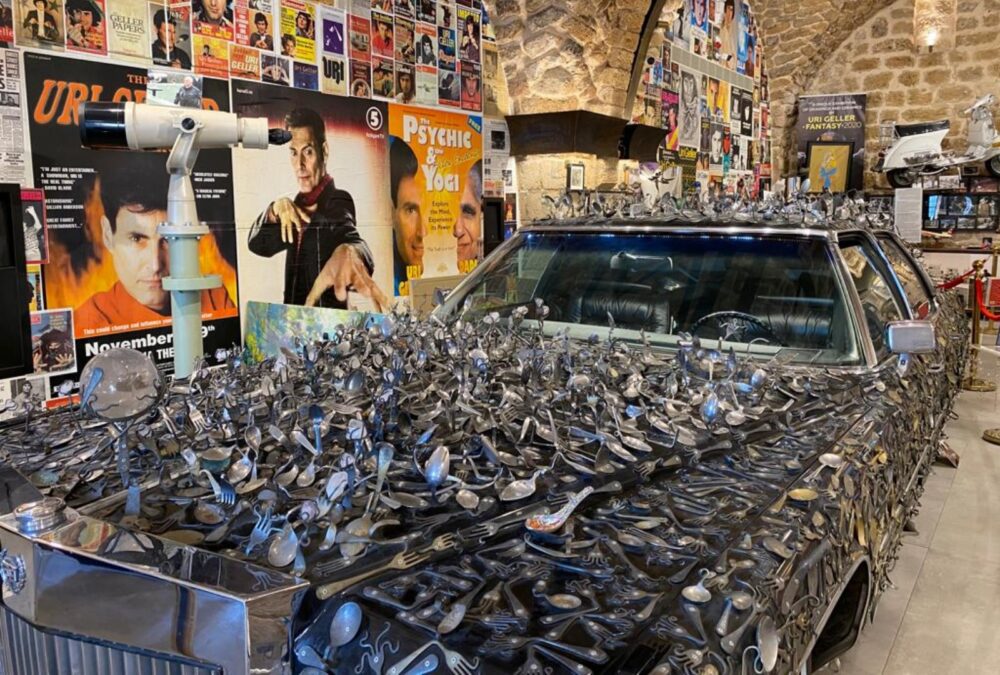 This cutlery-encrusted 1976 Cadillac has been displayed in museums around the world and now is permanently parked at the Uri Geller Museum in Jaffa. Credit: Abigail K. Leichman.

In 2011, Geller saw an article in a London newspaper about a recently discovered Leonardo da Vinci painting, “Salvator Mundi.”

“I fell off my feet because look what Jesus is holding in his hand! It was the crystal that Dali gave me.”

Geller sped off to Ashdod, where the Cadillac was stored at the time, and removed the crystal. Now it’s displayed above a replica of “Salvator Mundi” by British portrait artist Andy Harwood.

Visitors to the Uri Geller Museum watch a short video about Geller, accompanied by “The Symphony of Synchronicity” commissioned from Loretta Weinberger (Kay-Feld), a proud British émigré whose compositions for “Sesame Street” and former U.S. presidents Barack Obama and Donald Trump are well-known. Her family lived next door to the Gellers in England some four decades ago, and they’ve remained close.

Admission to the Uri Geller Museum is 45 shekels (about $15) per person. For now, it is open only to groups, booked in advance.

Most of the proceeds are funneled through the Uri Geller Charitable Foundation to Israeli children’s charities, including Save a Child’s Heart.

Whether or not you believe in Geller’s psychic abilities, his fascinating museum is warmly recommended for your next jaunt to Jaffa. It’s just a lot of fun.