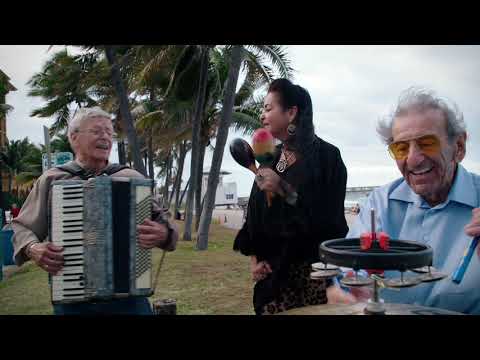 I must start my review of Saul and Ruby’s Holocaust Survivor Band differently than other reviews I have written. If you want to put a smile on your face and say L’Chaim “to Life,” I urge you to watch this delightful, hopeful,  funny, and simply irresistible documentary film.

To classify the film as a Holocaust film just doesn’t put it in its proper context. What the film demonstrates to all of us is a wonderful sense of hope and wonder! These two men who are both Holocaust Survivors in their 90’s illustrate how  to rise every day with a positive force.

The film previewed at the Miami Jewish Film festival in 2020 and won the top prize. It also won the first-of-its-kind honorable mention at the Atlanta Jewish Film Festival. But then,  COVID decimated the entertainment industry as well as Saul and Ruby’s dreams to personally entertain their audiences. COVID also denied the opportunity to give their film the broadest range of showings. All Jewish Film Festivals were canceled in the early Spring of 2020.

As I was speaking last week through ZOOM to Tod Lending the award winning producer and director of  Saul and Ruby’s Holocaust Survivor Band, I immediately felt the collective passion each has poured into this labor of love. Tod is a Jewish American producer, director, writer, and cinematographer. His work has aired on ABC, PBS, HBO, CNN, and A&E. Tod was nominated for an Oscar for his film Legacy. He has also been nominated for an Emmy.

Tod shared with me that he was so excited to move forward with this project that he made the decision in a snap not only to direct but to fund it with his own personal wealth. One day he got Saul on the phone and literally the next day he flew from Chicago to Miami to meet Saul and Ruby where? A deli of course. It was interesting to learn that this film was Tod’s first Jewish-themed film.

For Saul Dreier, drummer (who is 94), and Ruby Sosnowicz, accordion and keyboard (age 90). music has always been a tool of survival. Saul was born in Krakow, Poland and in his youth survived three concentration camps. In one, there was a cantor in his barracks. To pass the time, the boys formed a choir, singing soprano, tenor, and baritone parts, switching as the years went by and their voices changed. Saul learned to play drums by banging two spoons together as he accompanied the choir.

For Ruby, music means reclamation of spirit. He spent the war hidden by a Polish farmer, sleeping right next to cows and digging through the nightly garbage to collect bits of rotten potatoes for sustenance. After the war, he landed in a displaced person camp in Germany, where he acquired his first accordion.

Saul was inspired to start the Holocaust Survivor Band after the 2014 death of concert pianist Alice Herz-Sommer who was among the oldest Holocaust survivors when she died at the age of 110. Herz-Sommer was also the subject of the 2013 Oscar-winning documentary short The Lady in Number 6 and it only now seems fitting that Saul and Ruby have also become the artists portrayed in their own film.

Saul wanted to start a Klezmer band of Shoah Survivors and a friend mentioned Ruby and his accordion. They didn’t know each other and at first only spoke by phone. It was bashert; the two of them hit it off straight away. They were off together to play their Klezmer music.

Their initial goal was to raise enough money playing at temples and synagogues, Jewish retirement homes, and other Jewish venues to eventually return to their native Poland, the nation they fled as  refugees after World War II.

In my discussions with Tod, he mentioned that he took over two years to make the documentary.

JG: Tod, what convinced you to make the movie?

TL: “This wasn’t just going to be a film about looking back and telling the story of how these two men survived. That’s certainly part of the story. But what really hooked me was what they are doing now. Now at the ripe age of 91 and 87 when we started filming, these two guys were about to launch a whole new musical career for themselves.

Their common goal at that time was to go to Poland. To play their music in memory of their parents. Would they make it? Who knew? Both their wives were ill, and they were the caretakers of their wives, which I thought was an interesting kind of twist in the roles of husbands and wives. Usually, wives are taking care of their husbands who are ill. And I had a strong sense that it was very possible that during the time I was filming that the wives were not going to make it and I wanted to see how do these men deal with it? They’ve both been married to their wives for over 50 years, and they were the loves of their lives. That was another really important and interesting story to me.

“I was interested in their Jewish identity and what role that plays in their lives and how they’re dealing with issues of increasing antisemitism that is emerging all around them.”

JG: In the film, they do make it to Poland, but they demonstrate such mixed emotions, both highs and lows.

TL: “You know, for Ruby, it was his very first time going back since the war. And Ruby’s a hard character to read; he really keeps his emotions close to his vest. His daughter Chana thinks that there’s been some real trauma there that maybe he has not even been able to access; he was separated from his family and hid in a barn for four years during the war. But for Ruby, I think it really was cathartic.”

“And I would say the same for Saul. Saul (who survived multiple concentration camps and also worked for a time in one of Oskar Schindler’s factories) had been back at least once before to see where he grew up, but it had been years since he’d been back.”