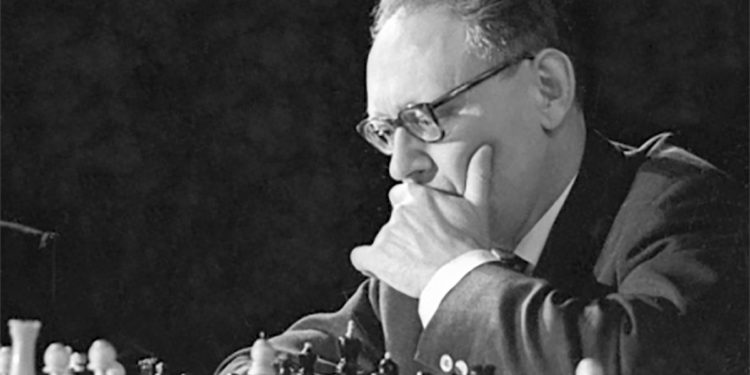 On August 17, 1911, Mikhail Moiseyevich Botvínnik was born. A Soviet chess player, world champion several times between 1948 and 1963. At the age of 24, Botvinnik was among the world chess elite, winning the most important tournaments of the time.

He was born in Kuokkala, near Saint Petersburg, and became known by defeating world champion José Raúl Capablanca in an exhibition of simultaneous games held during a rest day of the 1925 Moscow International Tournament.

Shortly afterwards he reached the final of the Leningrad Championship and, in 1927, made his brilliant debut in the 5th USSR Championship sharing fifth place.

Botvinnik later focused on his engineering studies and did not play tournaments very assiduously although he made rapid progress winning a 1930 Masters tournament and the Leningrad Championship.

At age 20, in 1931, he won his first USSR championship by defeating Riumin in the decisive game, after that, he decided to rest for a while and devote himself to analytical work, one of Botvinnik ‘s strengths throughout his entire life career. He would win another five USSR championships in 1933, 1939, 1941, 1945, and 1952.

At the age of 24, Botvinnik was among the world’s chess elite, winning the most important tournaments of the time. He was the winner (along with Salo Flohr) in Moscow 1935, ahead of Emanuel Lasker and Capablanca. He also won (along with Capablanca) Nottingham 1936 and tied for third place (behind Reuben Fine and Paul Keres) in the prestigious 1938 AVRO tournament, where the 8 strongest players of the moment competed.

After the end of World War II, he held secret talks with Alexander Alekhine for the world title dispute, but his premature death prevented their confrontation.

Botvinnik continued his successes and in 1948 he won the world title (which had become vacant after Alexander Alekhine’s death) at the Hague / Moscow tournament. He successfully defended his title in 1951 and 1954 against David Bronstein and Vasili Smyslov after drawing both matches 12-12.

He was proclaimed six times champion of the USSR and was a member of the Soviet team that won all the chess Olympics between 1954 and 1964, as well as the European chess championships of 1961 and 1965.