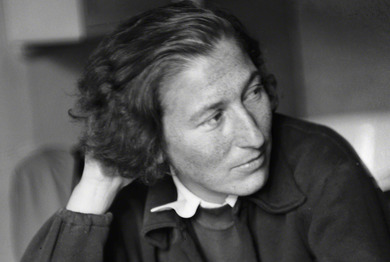 The first woman to work for Magnum, the cooperative photography agency founded in 1947 by Henri Cartier Bresson, Robert Capa, and others, Gisele Freund was born near Berlin on this date in 1908. An accomplished photojournalist, she became best known for her portraits of such writers and artists as James Joyce, T.S. Eliot, Virginia Woolf, Colette, Gertrude Stein, Simone De Beauvoir, Man Ray, Jean Paul Sartre, George Bernard Shaw, André Malraux, and Frida Kahlo — some of whom she captured with her camera in bohemian France during the 1930s after fleeing from Nazi Germany in 1933. Although she married to gain a French visa, Freund was a lesbian as well as a socialist. She was refused a United States visa in 1954, and was also thrown out of Argentina for publishing photographs of Eva Peron wearing lavish jewelry. In 1980 she, Freund became the first woman to receive the Grand Prix National des Arts from France, and in 1991 she became the first photographer to have a retrospective exhibition at the Paris Musée d’Art Moderne.

“She talked extensively of how she did not see herself as having made a career as a portraitist, despite the many masterpieces she left behind. Instead, she insisted on her less glamorous but in some ways, she felt, more worthy work, as witness to human suffering.” —Kathryn Knorr, New York Times