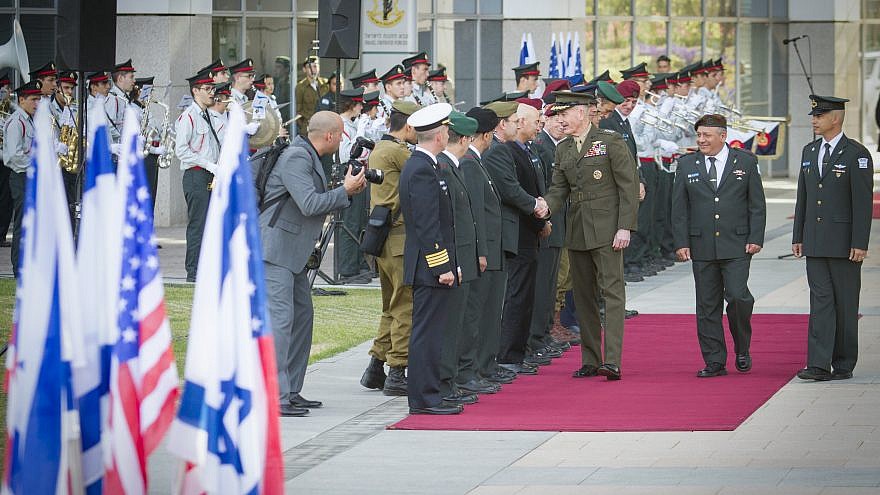 Maybe it was just one more attempt to help Israeli Prime Minister Benjamin Netanyahu win re-election. But whatever his motivation, President Donald Trump’s tweet that revealed that he had discussed the possibility of a U.S.-Israel mutual defense treaty with Netanyahu in a phone conversation last weekend has revived a topic that has long been a point of contention in the think-tank world.

On the surface, it sounds like a great deal for Israel. Why wouldn’t a small nation, still beset by implacable enemies on its borders after 71 years of independence, want its sole superpower ally to transform the informal commitment to the Jewish state’s security into a solemn and legal commitment? Such a pact would, in theory, strengthen Israel’s security since any opponent would know going into a conflict that attacking Israel would also mean facing the immense might of the most powerful nation on earth. Yet many of those concerned with Israel’s security believe that, despite Trump’s good intentions, the cost of a formal treaty of alliance might outweigh the benefits.

The idea has its origins in the anomalous manner in which Israel has always received U.S. military assistance. The alliance with the United States has always been a two-way street in which Israel gave a great deal to the Americans. That took the form of intelligence cooperation, as well as strategic assistance, giving the United States a stable democratic ally it could always depend in a conflict, in contrast to the uncertain nature of friendly Arab regimes. Yet while European nations received as much, if not far more, military help via America’s NATO commitments, those benefits were allocated via the Department of Defense, while Israel got its help via the foreign-aid budget. That made it seem like a beggar who got handouts, rather than a valuable ally. A mutual defense pact might help to correct that misconception.

In recent years, the Jewish Institute for National Security of America, or JINSA, has championed the idea. The group, which has done a great deal to promote good relations between military leaders in both Israel and the United States, as well as to support Israeli security, has been working on a draft of a treaty.

Most of all, a mutual defense treaty would be a standing warning to nations like Iran, which threaten Israel’s existence, that the consequences of starting a war to extinguish the Jewish state that it’s always threatening would be incalculable.

But the drawbacks of a pact are just as obvious as its advantages.

While Trump is so friendly to Israel that he might be counted on to give it the green light to do what it thought best to counter security threats, future administrations might not take the same attitude. As Israelis learned in 2014 during the Gaza war, the United States had other interests that it considered greater priorities than defending Israel’s security. The pressure from the Obama administration to stop Israeli operations aimed at silencing Hamas missile fire from Gaza or even to eliminate its terror tunnels was immense. At that time, America’s leverage over Israel was mainly in the form of its ability to withhold vital shipments of ammunition. If Obama had the leverage of a treaty, the problem might have been worse.

Indeed, as Israel learned in the weeks leading up to the 1967 Six-Day War and then during the 1973 Yom Kippur War, even American administrations that were favorable to Israel didn’t hesitate to use their leverage to advance their own perceived interests, even if it meant making the Jewish state’s situation more perilous. That was also true with respect to President George H.W. Bush’s not-so-subtle request that Israel not retaliate against Saddam’s SCUD missile attacks on the Jewish state during the first Gulf war.

Similarly, it is arguable that a treaty between the two countries might have stopped Menachem Begin from ordering an airstrike on Iraqi dictator Saddam Hussein’s Osirak nuclear plant in 1981 or Ehud Olmert’s decision to take out Syria’s nuclear program in 2007.

It’s also true that although Obama’s 10-year commitment to military aid to Israel seemed like a gift, its purpose was as much to handcuff Israel’s freedom of action with respect to Gaza or Iran as it was to help.

What these examples remind us is that although Israel and the United States are united by common values and interests as fellow democracies, no two nations’ security interests are the same. The United States will, even under the friendliest presidents, perceive its interests in the Middle East as encompassing issues that transcend what is good for Israel. And despite Israel’s understanding that America’s desires must be given great deference, the Jewish state’s imperative to protect its people from deadly foes can’t be ignored in order to please Washington.

Seen in that light, perhaps Israel is better off retaining its freedom of action than getting a commitment to its security from the Americans. Indeed, such a pact might only be of value in wars in which U.S. assistance might come too late to be of any utility. So while Trump deserves credit for thinking of Israel as an ally rather than a burden, as Obama seemed to do, it might be better for both nations to table the discussion of a mutual defense pact that might be more trouble than it’s worth.