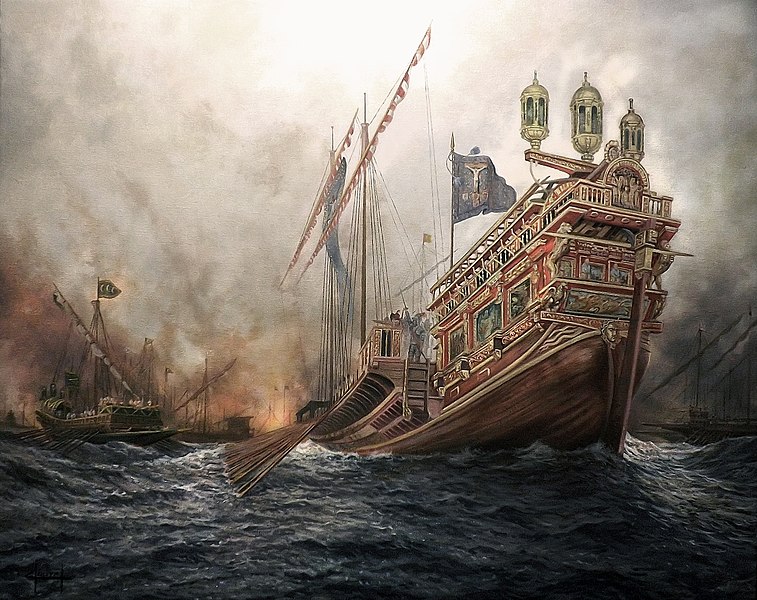 Last week, Oct. 7 to be precise, was the 450th anniversary of the Battle of Lepanto. Why should you give a flying fig? Because it was a pivotal clash in a war that has not yet ended, a war in which the United States recently lost a significant battle. Perhaps I better back up.

In the seventh century, Islamic armies sprang from Arabia and began conquering and colonizing. Fearless troops marched west across North Africa and up into Spain. They ventured east through Central Asia and deep into India.

Over the centuries that followed, wars raged, on and off—more on than off. Then, in 1453, the armies of the Ottoman Empire and Islamic Caliphate conquered Constantinople, the Christian capital of Byzantium, also known as the Eastern Roman Empire. (The Western Roman Empire had fallen a millennium earlier.)

Less than a century later, in 1529, Islamic forces attempted to take Vienna. Their failure, historian Bernard Lewis wrote, “was seen on both sides as a delay, not a defeat, and opened a long struggle for mastery in the heart of Europe.”

On Oct. 7, 1571, one of the great naval battles of all time took place off southwestern Greece near the town of Lepanto. The decks of oar-propelled galleys became burning battlefields. The blood of tens of thousands of Christian and Muslim warriors turned the sea red.

Though the Ottomans were more numerous, the Holy League prevailed. Among the fruits of victory: the liberation of 15,000 Christian slaves.

Lewis wrote: “All Christendom exulted in this victory. …The Turkish archives preserve the report of the Kapudan Pasha, the senior officer commanding the fleet, whose account of the battle of Lepanto is just two lines: ‘The fleet of the divinely guided Empire encountered the fleet of the wretched infidels, and the will of Allah turned the other way.’”

Despite this setback, Lewis added, by the seventeenth century, Ottoman pashas were “ruling in Budapest and Belgrade, and Barbary Corsairs from North Africa were raiding the coasts of England and Ireland and even, in 1627, Iceland, bringing back human booty for sale in the slave-markets of Algiers.”

A few decades later, an enormous Islamic army again attempted to take Vienna. A terrible siege began in July of 1683. But in September, the Holy League came to the rescue. Jan Sobieski, the king of Poland, led 20,000 horsemen in the largest cavalry charge in history, driving the invaders from the gates of Vienna.

Lewis quotes a candid Muslim chronicler: “This was a calamitous defeat, so great that there has never been its like since the first appearance of the Ottoman state.” In the Muslim world, it is generally agreed that this defeat took place on Sept. 11.

Fast forward to the 20th century: The Ottoman Empire and Caliphate align with Germany in what we now call World War I. The defeat resulted in the empire’s collapse and the caliphate’s abolition by Mustafa Kamal Ataturk, the secularist father of modern Turkey. The victorious British and French appropriated Ottoman possessions, including lands transformed into the nation-states now known as Iraq, Syria, Lebanon, Jordan and Israel.

I’ve summarized only a few of the many significant clashes between Islamic and Christian empires. The point I’m trying to convey: While three American presidents in a row were persuaded that a couple of decades of low-intensity conflict amounted to an unsustainable and intolerable “endless” or “forever” war, those who proclaim themselves jihadis have never been so easily daunted.

The leaders of the Taliban, Al-Qaeda, Islamic State, the Muslim Brotherhood, the Islamic Republic of Iran, Hezbollah and Hamas do not have identical theologies. Nor would it be accurate to see them as neo-Ottomans, an adjective that has been applied with some justification to Turkish President Recep Tayyip Erdoğan.

But they do have in common the conviction that they are “divinely guided” to wage holy war, to restore to Islam the power, supremacy and dominance they believe is its due—however many decades or centuries that may require. Retribution against Muslims who refuse to submit also is on their to-do list.

In congressional testimony last week, Thomas Joscelyn, a senior fellow at the Foundation for Defense of Democracies (FDD) and senior editor of FDD’s Long War Journal, noted that Ayman al-Zawahiri, who has led Al-Qaeda since Osama bin Ladin’s death, “has described the Taliban’s ‘blessed emirate’ as the ‘core’ or ‘nucleus’ of the jihadists’ effort ‘to reestablish their caliphate according to the Prophetic methodology.’”

He observed, too: “The resurrection of the Taliban’s Islamic Emirate, which was deposed during the U.S.-led invasion in late 2001, is a boon for the global jihadist movement. … [T]he Islamic Emirate of Afghanistan’s interactions with other nations and international institutions will continue to serve as a model for jihadists around the globe.”

Americans and Europeans might want to consider that before seating the Taliban at the United Nations and providing economic assistance.

I’m hoping you’ll take away a second point: Those who contend that “endless wars” can be ended by ceasing to fight enemies who have not ceased fighting us serve only to encourage and embolden those enemies. That’s true not just of the modern jihadis but also the empire-builders of Beijing, Moscow and Pyongyang.

Branding isolationism and appeasement as “restraint” and “responsible statecraft” does not make them so, any more than slapping a Chateau Mouton Rothschild label on a bottle of hemlock transforms poison into wine. We took a big sip in Afghanistan. Those acquainted with history will want to think hard before continuing to imbibe.

This article was first published in “The Washington Times.”