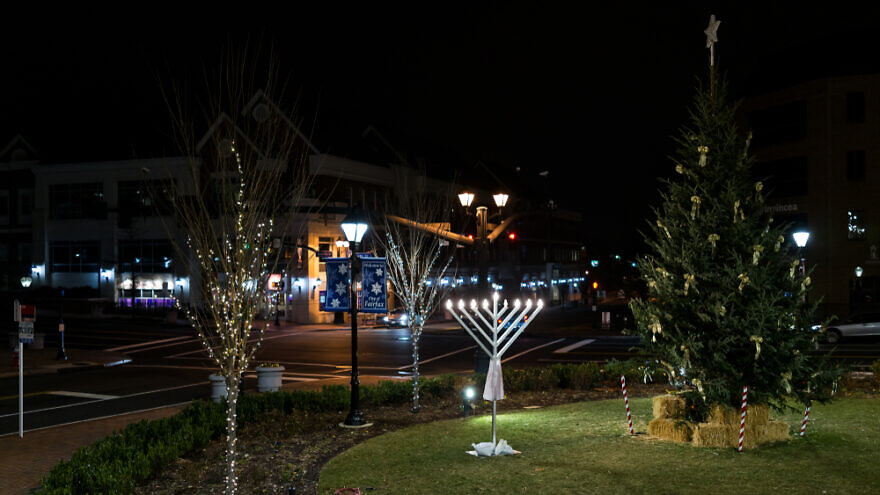 The “Ask Real Estate” column of The New York Times was faced with a thorny question from a reader this past week. Shortly before the start of Hanukkah, it was perhaps inevitable that the dilemma about which advice was sought had to do with the annual battle over representation of the holidays in public spaces. In this case, it concerned a complaint about the management of what the writer described as a “luxury co-op” located in the Midtown East section of Manhattan.

The source of outrage was the decision of the co-op board to change the holiday season display in the lobby from one that consisted of a large Christmas tree and a large menorah to one in which the large tree remained, but the menorah was downsized and moved to a spot by the elevator. The reader was deeply offended by the slight to the honor of Hanukkah, as well as “deeply hurt” by what she described as the hostile reaction from the president of the board, which, even when asked to do so, refused to alter the decorations, which she perceived as “discriminatory.”

“What can I do?” she asked the columnist.

The reply consisted of a short survey of real estate attorneys who differed about whether the circumstances constituted an actionable instance of religious discrimination, despite the fact that the dispute concerned private property rather than a government square or building. Still, a representative of the New York City Human Rights Commission conceded that if a complaint about the incident was lodged with them, then it would start an investigation to determine if some sort of government sanction could be invoked against the co-op. As the columnist pointed out, the mere threat of such a probe might cause the board to change its mind.

It is an axiom of modern American life that if non-Jews really wanted to undermine Jewish identity, the worst thing they could do would be to move the celebration of Christmas to a different time of year. Secular Jews have largely defined their Jewishness by counting themselves among those who don’t celebrate Christmas. Those who fit in this group might once have loosely belonged to Reform or Conservative synagogues, but today are more likely to be unaffiliated and listed among the group demographers call “Jews of no religion.”

They have often expressed that rather amorphous distinction with efforts to either chase symbols of the holiday celebrated by the overwhelming majority of their neighbors or, more productively, asked to have their celebration of Hanukkah included alongside Christmas decorations.

A lot of this angst about the ubiquitous nature of Christmas celebrations has taken the form of lawsuits about displays on public property. The seminal court case over the issue was County of Allegheny v. the American Civil Liberties Union, which was decided in 1989 by the U.S. Supreme Court. The case concerned an effort by the Pittsburgh ACLU to ban the holiday displays at the Allegheny County courthouse that consisted of a Christmas tree, a crèche depicting the story of the birth of Jesus and a Hanukkah menorah that was provided by the local Chabad on the grounds that these symbols were an unconstitutional establishment of religion banned by the First Amendment to the U.S. Constitution.

The court didn’t rule on the constitutionality of the Christmas tree, on which there was a consensus that it was a symbol of the holiday season and essentially secular rather than a religious one. The court ruled by a 5-4 majority ruling that having the crèche on public property was an impermissible endorsement of religion but in a separate 6-3 ruling decided that the menorah should be allowed. Justice Sandra Day O’Connor stated that while the menorah standing alone would be considered an illegal religious symbol, together with a tree it became a secular symbolism of religious pluralism. One of the minority votes came from Justice John Paul Stevens who declared that the tree and the menorah constituted a double violation of the establishment clause since placed alongside each other, they were a state endorsement of the two faiths as opposed to any other religion.

The prevailing legal understanding of the issue now allows for Christmas trees and menorahs on public property. The irony is that the most fervent opponents of these displays are usually liberal Jews.

Questions about the establishment of faith are important. When that line is crossed—as was the case recently when retired Gen. Michael Flynn declared that there should be only “one religion” recognized by the United States, such a desire to create a state-endorsed church is something that must be opposed.

Still, those who pursue controversies about trees, crèches or which holiday songs are sung at public school holiday assemblies do nothing to protect the rights of Jews. Rather, they are part of an effort to promote a vision of America that is aggressively secular and in which the public square is cleansed of all religious symbolism or practice.

This is mistaken both from the point of constitutional law, and for what is good for the country and the Jews.

The Constitution does forbid the creation of a state religion, but it is a formula for defending the freedom to express one’s faith more than it is a blueprint for establishing a freedom from religion.

Jews may generally think of Christmas trees as linked to the celebration of religious observance and often define themselves as much by not having such a tree in their homes as they do by inflating the relatively minor Jewish festival of Hanukkah into a blue-tinseled version of their neighbor’s holiday. Hanukkah is a festival that commemorates a bloody war against a foreign power that sought to extinguish Jewish identity with the help of assimilated Hellenist Jews—not a Jewish version of “good will to all men.”

Those who seek to replace public Christmas celebrations with amorphous holiday season greetings stripped of any religious ties seem to want to pretend that they are not a small religious minority, albeit with the same rights as the majority in a nation without an established religion.

That is bad law, as well as damaging for both the Jews and the rest of the community because it is bound to cause ill will. Most Americans now see the tree as secular rather than religious, and Jews need to both acknowledge that all we need from the majority is equal rights and reasonable accommodation for our observances, and not the pretense that this isn’t a nation where most people celebrate Christmas.

We may sympathize with that resident of a luxury Eastside Manhattan co-op when she sees the menorah as somehow being slighted in favor of a tree. And yet there is no constitutional right to be able to force everyone else to pretend along with us when Jews wish to act as if they are not a religious minority.

Being a Jew has always meant leaning into our distinctiveness and refusing to worship the idols of popular culture, not a campaign to demand that others give up their fun.

Jews need to enjoy their own holiday, whether that means turning it into an equally secular gift-giving extravaganza or a more sober observance. Most of all, they need to stop worrying about the presence or even the relative size of the trees and menorahs on public display. The more they do so, the happier they will be—and the more likely they will be to avoid hurting the feelings of their neighbors whose holiday decorations pose no threat to Jewish identity or security.