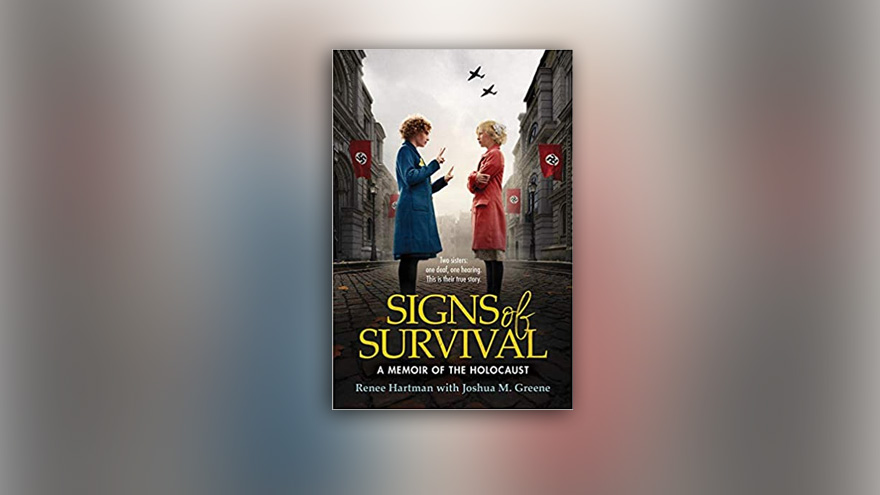 This joint memoir, intended for students in grades 3 through 7, tells the story of two young sisters — one hearing and one deaf — who survived World War II notwithstanding their transport as orphans from Bratislava to the Bergen-Belsen Concentration Camp, where, a year later, Renee, the older of the two sisters, was near death from typhus when the camp was liberated by British soldiers.

The story is told in alternating voices — Renee would speak and then Herta would speak — each relating the different stages of their Holocaust experiences from their unique perspectives.  Aged 10 and 8 when the trauma began, Renee, as a hearing person, was responsible for translating into sign language orders from the Nazi guards and their assistants to Herta.  At times, the sense of responsibility to keep going, not only for herself but for her younger sister, was overwhelming.  For Herta, the feelings  of isolation and total dependence on her sister at times were overpowering.  However, both sublimated their feelings in the common struggle to remain alive while many others, adults as well as children, were dying all around them.

The book was put together by Joshua M. Greene from the oral (and signed) testimonies that Renee and Herta gave to the Fortunoff Video Archive at Yale University.  Renee was an active collaborator in the process.

After liberation, the sisters were sent to Sweden, where Herta was able to attend a school for the deaf in Stockholm, while Renee lived with a family in Malmo — the first time that the sisters were separated.  Subsequently, relatives who learned that they were alive sponsored them to live in the United States, where they both went on to have careers and their own families.

While parts of the story are familiar — as the Nazis had a recognizable process by which they stigmatized, then dehumanized, transported, incarcerated, and more of then not, murdered, Jews — the reactions of individual Holocaust survivors to the brutality they suffered ranges greatly.

I was struck by Renee’s commentary that she often feels “there are really two of me, two selves living simultaneously.  One is the person who lived before the Holocaust, and the other is the person who lived afterward — the pre-wartime me and the post-wartime me.  They are both me; they are connected, but they can’t be reconciled–they never will become just one person.  They will always be different.  It took me a while to realize that not only are these two selves never going to become one person but that I don’t want them to.  I want them to remain separate. I don’t want the earlier me, the one who experienced the Holocaust, to ever be lost or forgotten.”

The older Renee, of course,  had become wiser to the ways of the world, no longer in possession of the innocence of youth.  It is remarkable that she is able to carry within her psyche the child who she was. As an adult, Renee gave many speeches and wrote articles about her experiences.  Perhaps by doing this, she was able to hold on longer to the memories of her childhood.  Because she was blonde with curly hair, she could pass for a Christian child.  One of her favorite memories was shedding her coat, with its mandatory sewn-on Jewish star, and watching movies with other children during the Nazi era.  She recalls her  joy while watching the movies of Shirley Temple.