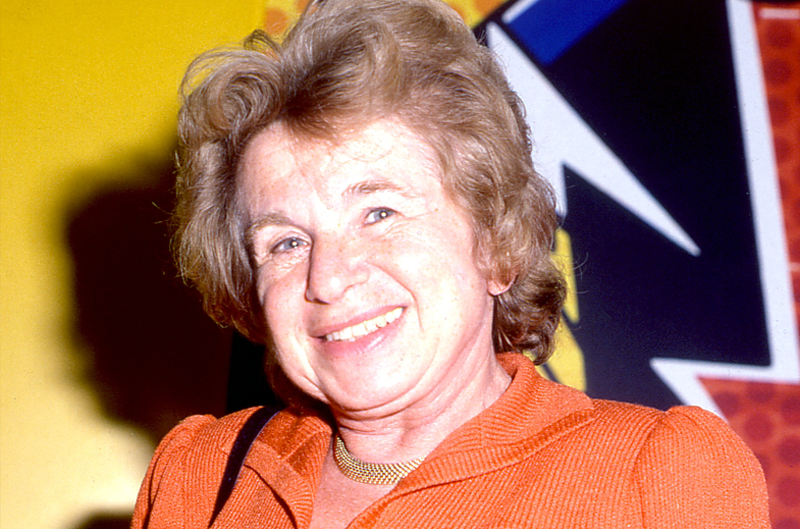 Hummingbird-like, Tovah Feldshuh inhabited Dr. Ruth Westheimer as she flitted around the stage, all the while, espousing optimism, warmth, and humor. The actress incredibly mastered the German-Swiss-French-Hebrew-English accent with nary a dropped rolling R, as she relayed the fascinating life of the petite renowned sex therapist.

The audience is invited into Dr. Ruth’s apartment as she is packing up to leave this home she has shared with her beloved Fred, Husband #3. “So glad you’re here,” she coos graciously. Taking framed pictures from the walls, Ruth introduces us to her family, while images are cleverly projected in the windows of the apartment, courtesy of Aaron Rumley. Amid intermittent phone calls, we are provided a history of Ruth’s life. And quite a life it is!

Dr. Ruth was born Karola Siegel, to German Jewish parents. Raised in an Orthodox home in Frankfurt, Karola observed tension between her mother, Irma, and her paternal grandmother. Julius, her father, had gotten intimate with the servant, and this created strife. However, when Karola was born, her grandmother’s attitude softened a bit.

The comfortable, bucolic childhood changed abruptly when Hitler and his machine began their onslaught against the German Jews. Following Kristallnacht, many families realized that Germany was no longer safe for Jews. Karola watched as her father was taken from the home and forced into a  Nazi transport. That was the last time she saw him. The only place where the jecke (German Jews) were believed safe was Switzerland. Karola packed her few precious belongings, a doll, a chocolate bar, and a monogrammed washcloth, and boarded the Kindertransport. She didn’t allow herself to cry as she bravely hugged her mother and grandmother goodbye. 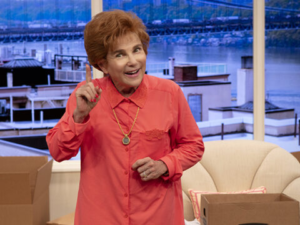 Switzerland was no panacea for these children. Unbeknownst to them, the “rescued” German Jewish children were to wait on their Swiss counterparts at the Wartheim school. Karola recalls a cruel headmistress telling them, “You were given away.” Luckily, there was a bright spot for Karola; she fell in love as only a 12-year-old girl can. The object of her affections was an older man. Walter was 13!

In 1945, the war ended, and Zionism was in full bloom. “Palestine needs you to come home” Karola heard. Dreaming of the land flowing with milk and honey, Karola endured a rude awakening when, once again, she found herself looked down upon by the Polish Jews and was assigned a collection of tasks on a farm in Tel Aviv. The new pioneer decided it was time to take a Jewish name so she became Ruth K. Siegel. Ruth kept the K as her middle initial in case the Red Cross was able to locate her parents or they, her.

Palestine provided an education that wasn’t quite the normal course load for an aspiring kindergarten teacher. Moving to Jerusalem for a teacher training program, Ruth joined the Haganah and became an excellent sharpshooter. After an attack, the diminutive Ruth was injured. With shrapnel in her neck and severe wounds to her feet, she was sent to the hospital. The ward in the basement was filled with men. There was no bed for Ruth, so she was placed on a bookshelf to recover.  Here she met David and was smitten with his good looks. The two married and moved to Paris for David’s medical training, while Ruth enrolled at the Sorbonne in a program to become a Kindergarten teacher. This was husband Number One, and the marriage did not last much beyond a year, with David returning to Israel.

Back in Paris, Ruth met Dan, a “sexy French Jew.” The two bought fourth-class tickets on a ship to America. Winning a scholarship to the New School, Ruth continued her education. At the time, Ruth wanted to learn English, but couldn’t afford language classes, so she taught herself by reading “True Confessions” a rag that oozed romance stories targeting women 20-35 years of age. She said that this was her “Dickens and Shakespeare.” Though this marriage ended in divorce, the “fabulous love affair,” did produce a daughter, Miriam.

In 1961, Ruth went on a ski trip with a group to the Catskills. Here she met Manfred Westheimer. He referred to their meeting as his biggest skiing accident. Once more her heart was captured, only to learn that Freddy had two girlfriends! Ruth explained that sex is a lot like skiing, composed of “instincts, movement, and taking risks.” One story she related about Fred brought a big laugh. When the couple was being interviewed by reporter Diane Sawyer, Sawyer asked Fred, “Do you have a good sex life?” He looked at her and deadpanned, “The shoemaker’s children don’t get any shoes.” The marriage ended when Fred died of a stroke in 1997. The pair had a son, Joel.

In 1970, Dr. Ruth graduated from Columbia Teachers College and was on the Dean’s list. Her only regret is that her father couldn’t be there to see her achieve this incredible feat. She was now officially Dr. Ruth, a moniker that would soon become a household name.

A radio show “Sexually Speaking” began as a 15-minute bit, where callers could call up with any question, and Ruth, with her purring-but-to-the-point replies, would answer. The show was such a success that it was soon extended to an hour.

So how is it that Tovah Feldshuh was able to become Dr. Ruth? The two are friends. In fact, Dr. Ruth attended both of Tovah’s children’s weddings. The pair had several long interview sessions, and with the photographic work of Oliver Shoulson and Joan Roth, the apartment came to life. Having interviewed Ms. Feldshuh recently for the San Diego Jewish World, I believe the two women share the same sense of passion for purpose, action, and a love of all things Jewish.