Home Recommended Books Book Review: ‘The Taming of the Jew’ 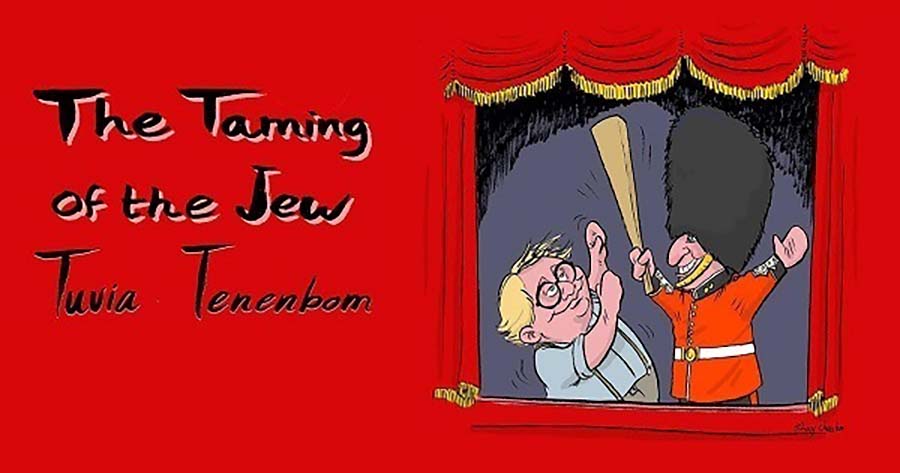 Tuvia Tenenbom is an expat Israeli who has lived in Germany and elsewhere for many decades, working as a journalist and author. Holding many academic degrees, Tenenbom is also a playwright, essayist, and the founding artistic director of the Jewish Theater of New York. Tenenbom has a very idiosyncratic style. His sardonic personality goes well with his cherubic appearance, and the reader is soon caught up in Tenenbom’s droll reporting of mundane encounters with people all around the world. His latest book, The Taming of the Jew, features people from Ireland and Britain. The thing is, most of those interviewed either know almost nothing about what they are saying, or are consciously spreading vicious, false narratives about Israel and Israelis.

Tenenbom usually impersonates a reporter of any convenient nationality, even Arab. Below are some illustrative examples of his style.

Shane, the president of Trinity College’s Student Union, says the Union approved BDS (Boycott, Divestment and Sanctions movement) against Israel by a two-thirds majority. In fact, there should be no trade with Israel, period. Why? The Gazans have been abused by Israels for decades and Trinity’s students don’t want to be part of it. Tenenbom asks Shane, have you been to Israel? No, but he was told all this by Palestinians. And also, the Israeli government shoots Palestinian children. Hamas denies that Hamas fires rockets at Israeli citizens, and that’s the truth.

The mayor of Dublin flies the Palestinian flag over City Hall to show solidarity with the Palestinians. He hasn’t been to Israel but he has a reasonable idea about it, says he. The Irish government wants to help the suffering Palestinians. The mayor admits that atrocities are done in various countries, but only Israel is criticized because, “We can’t be consumed with every misery” out there. Palestine is enough.

In Edinburgh, Tenenbom meets two officials of a Hebrew congregation who are eager to share with him how great it is to be a Jew in Scotland. The congregation’s chairman says, “I don’t recall actually at any time having any anti-Semitic comment made to me, directly or indirectly.” The rabbi concurs. There are about 5,000 Jews in Scotland, about 1,000 of them in Edinburgh. About 40 attend Shabbat morning services and there are 12 students in Sunday school.

Tenenbom tells them that he doesn’t buy their rosy picture. The rabbi admits that life isn’t really so good. The Church of Scotland has a very negative outlook on Israel, denies Jews’ claims to their homeland, and avers that Israel should be boycotted as an apartheid state. Consequently, the Jewish community and the Church are not talking to each other. The Church loves Palestine.

Newcastle is the first English city Tenenbom visits. Students at the local university were given white T-shirts encouraged by their student societies to write whatever they chose on them. Tenenbom observed that the swastikas and anti-Semitic hate slogans were often the students’ choice. (Newcastle U. is just one of several instances of this phenomenon.)

In Leeds, Tenenbom talks with some older Jews who tell him that they feel very welcomed by their non-Jewish neighbors. But later on, they change their tune, saying that, “It’s inbred in them – they hate us.” Similar to Scottish Jews, English Jews say everything is great, but if you continue talking to them, they tell you that everything is a disaster.

Tenenbom discovers the common attitude of Jewish parents in Manchester: “What do you want me to do? If I tell you about the antisemitic attacks that we experience here, you’ll write about them, inviting copycats, and more people will attack us. If I tell you that everything’s good, hopefully it will be good.”

Liverpool. With a Labour member, a Jewish Dame Commander of the British Empire, Tenenbom asks, “Is Jeremy Corbyn an antisemite, yes or no?” She replies, “I don’t know what is in his heart but I do know that he has presided over the growth of antisemitism in the Labour Party. I think [Jeremy] has a blind spot understanding leftist antisemitism.” Tenenbom mentions to her that Corbyn believes that Jews have no right to their own country, Israel. “Correct,” she says. Tenenbom asks, “Would you agree with the definition stating that denying the right of Israel to exist is antisemitic?” Dame, “The definition is correct.” This goes on a while. All she will admit is, “He’s acting like an antisemite.” Later, Tenenbom asks her husband if Corbyn is an antisemite and receives the reply, “Yes, he is.” Then Tenenbom asks, “Does your wife tell you that Corbyn’s an antisemite?” Again, he answers, “Yes.”

Shrewsbury: Walking around, Tenenbom meets Alex, who says he cares about international issues. “Not long ago, the Israeli army killed forty Palestinian children in just one day… I think the establishment of the State of Israel was wrong. They came in and took over a country, Yes, this is a difficult story… The Holocaust is a big rabbit hole. History is always written by the victors, so you can’t really tell. Did the Germans kill the Jews? Not all agree. Did Hitler order to kill the Jews? There’s no evidence for that. And if some Jews were killed, how many were there? That’s another rabbit hole…. I read a lot about Israel, not about the others [countries]. I think you’re right [that] I’m not interested in the others. I’m just not. I don’t know why.”

Tenenbom’s books are worthwhile reads. His canny ability to get strangers to reveal their innermost thoughts lets us know what Jews and Israelis are up against. Tenenbom has written other similar books. His first in this series was I Slept in Hitler’s Bed describing contemporary Germany; Catch the Jew!” how Jews are described by Palestinian Arabs and Israeli Jews; The Lies they Tell what Americans think about Jews, and now The Taming of the Jew,” Tenenbom’s most recent book. You can get Tenenbom’s books from Gefen Publishing House (www.gefenpublishing.com) or amazon.com and others.

Happy Passover to all my readers celebrating this wonderful holiday!