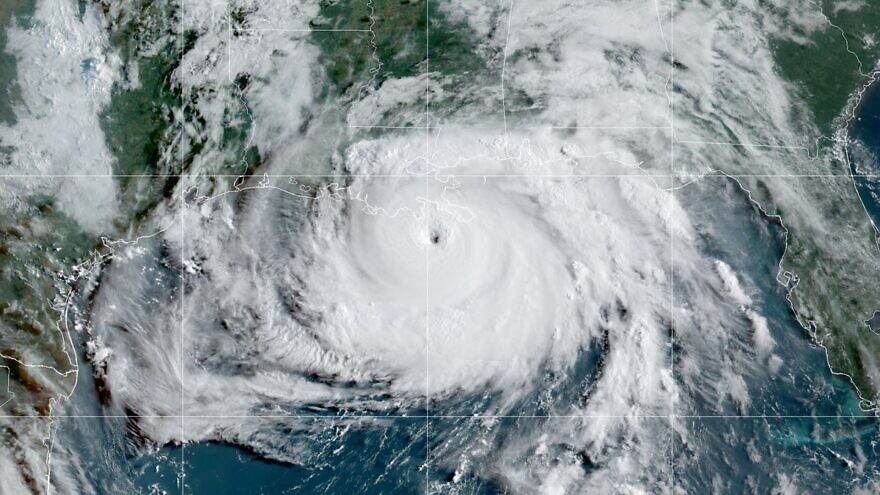 Jewish community leaders in New Orleans say it will be several days before the full impact of Hurricane Ida will be known, but so far it seems that the community’s infrastructure remains largely intact.

“We just endured one of the worst hurricanes in our country’s history in terms of severity, and while there is extensive damage throughout parts of the southern Louisiana, we are grateful in New Orleans for several things, including the limited loss of life at this point, that our city’s levees built after Hurricane Katrina held and that flooding in the neighborhoods seems minimal,” said Arnie Fielkow, CEO of the Jewish Federation of Greater New Orleans and a former city council member, who evacuated with his family on Sunday morning.

One of the biggest challenges facing New Orleans overall, he continued, is the lack of power throughout the city. In some areas, including Metairie, there is also a lack of clean, fresh water.

According to Entergy, the company that provides power to New Orleans, “as a result of Ida’s catastrophic intensity, major transmission lines that deliver power to NOLA are currently out of service. We know of one downed transmission line that spans the Mississippi River. The destroyed tower withstood Katrina.”

While the levees in New Orleans, which were rebuilt after Katrina, appear to have held during Ida, the long duration of hurricane force winds caused trees to snap, power lines to crumble, shingles to fly off homes and other damage.

But the physical damage from the storm, at least in Jewish neighborhoods, seems to be limited. According to Fielkow, a survey of the exterior of the Jewish federation building, which shares a campus with a JCC and a Jewish day school, showed no major damage.

Rabbi Josh Pernick, the Oscar J. Tolmas Rabbinic Chair at Congregation Beth Israel, evacuated to Memphis after Shabbat, but he has been in touch with his congregants and said, “Thank G-d thus far it sounds like our members who stayed home made it through OK, and the shul has minimal damage.”

Estimates state that about half the Jewish community evacuated from the city prior to the storm; a number that mirrors the overall number of evacuees. Both city officials and Jewish leaders expect those numbers to rise once people are allowed to travel, given the lack of power and limited cell phone service. A shelter in place order remains in effect.

“I think once people can get in their cars and know the estimate on the power loss, I think people will be anxious to move to a temporary site so they can have electricity, air conditioning and comfort,” said Fielkow. “It’s 90 degrees in New Orleans and it will get hotter in the coming days. It’s a challenging situation to be in a home without power right now.”

He said that The Jewish Federations of North America, the umbrella organization of the Jewish federation system, is expected to create a fundraising campaign for those affected by Ida in the coming days, but the community’s needs are still to be determined.

“Once we fully assess the impact on the Jewish community, we will be able to have a better idea of the needs and how it relates to [our] meal programs, High Holidays, social services…and a whole variety of things,” Fielkow said. “It will take us several days before all our partners and the federation can come to a decision on what that will look like.”