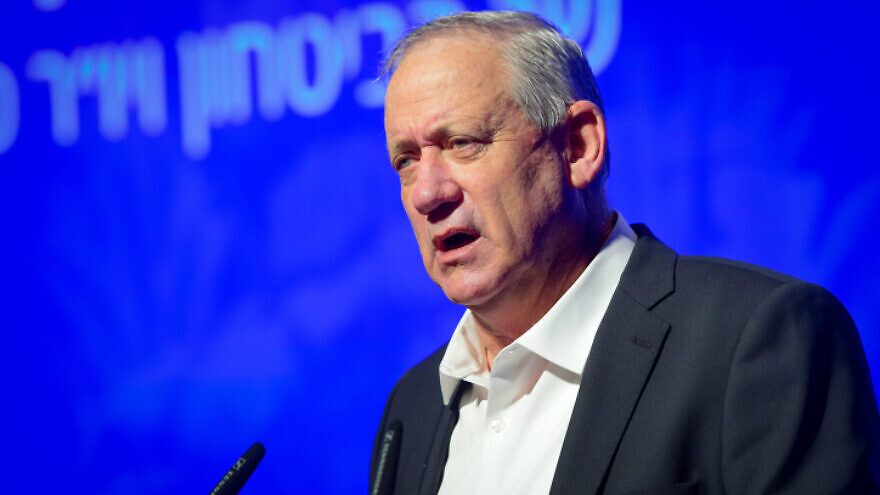 Israel’s defense minister warned on Tuesday that the Iranian threat does not focus solely on Israel, and that the Islamic Republic has not given up on its dreams of world domination.

Speaking at a conference hosted by the Lauder School of Government, Diplomacy and Strategy at Reichman University (IDC) in Herzliya, Defense Minister Benny Gantz explained that “Iran seeks regional and then a global hegemony, and to impose an extremist ideology in which human rights are trampled, LGBTQs are hanged, women are marginalized, and resources are allocated for the benefit of the regime.”

Tehran’s efforts to that effect include “taking over failing states like Yemen, Syria, Iraq and Lebanon. The method is clear: First we take Damascus, then we take Berlin,” said Gantz.

Iran, he continued, was also operating outside the region, “transferring oil and weapons to Venezuela, deploying its Quds Force in South America, and trying to gain influence in Afghanistan.”

In his speech, Gantz revealed the drone bases in southern Iran, from where he said UAV attacks were launched at targets in and near Gulf waters.

The Islamic Republic is also using drones to transport weapons to terrorist groups in Judea and Samaria, he warned.

Gantz urged world leaders to resist Iranian pressure and underscored their shared interest with Israel with respect to curbing the ayatollahs’ military and nuclear aspirations.

“World nations have many tools with which to face and counter the threat, and a ‘Plan B’ must be put in place” in case the diplomatic options fail, he said.

While a diplomatic solution was always best, said Gantz, “at the same time, the option to use force must be on the table, as well as a continuation of diplomacy by other means.”

This, he continued, “can prevent the need for stronger measures” to be taken.

The Israeli defense minister thanked the United States in his speech for the “sanctions and other measures” it has taken recently to reach this common goal.

Negotiations in Vienna around a possible U.S. return to the 2015 Joint Comprehensive Plan of Action nuclear agreement, which the U.S. exited unilaterally in 2018 under President Donald Trump, are set to resume on Nov. 29.