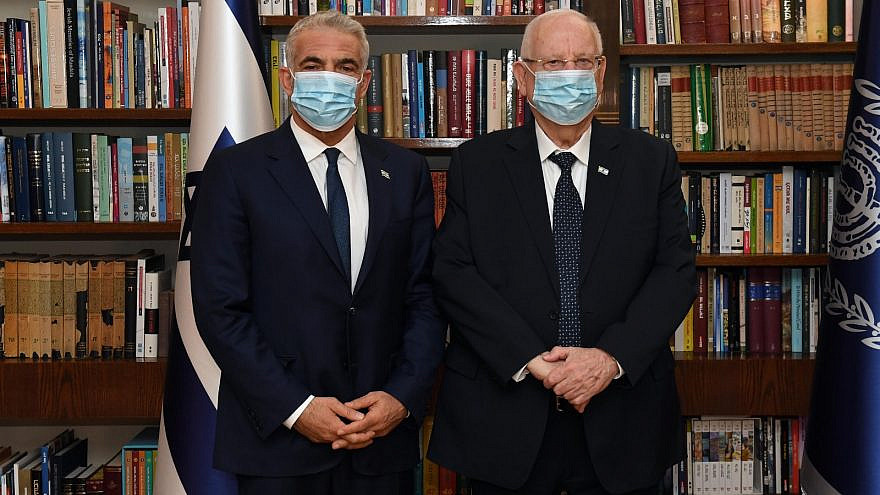 Israel’s President Reuven Rivlin has announced that Yair Lapid will now receive the mandate to form the country’s next government.

Rivlin made the announcement in a televised statement from his official residence, saying that his “main consideration” was who was the best choice to form the next government.

“From the number of recommendations, it is clear that MK Yair Lapid could form a government that has the confidence of the Knesset, despite there being many difficulties,” Rivlin said, noting that returning the mandate to the Knesset  would “be a misapplication of the law and could result in a fifth round of elections before all possibilities for forming a government had been exhausted.

“We will do everything to create an Israeli unity government,” Lapid wrote in a statement on his Facebook account.

In consultations with Rivlin, Lapid was endorsed by 56 MKs, up from 45 in the previous round of consultations. The Yamina Party, led by Naftali Bennett, also recommended Lapid, who was able to get the backing this time of Gideon Sa’ar’s New Hope Party, as well as several Arab MKs from the Joint Arab List.

Lapid also has the support of the Blue and White, Labor, Meretz and Yisrael Beiteinu parties.

Despite Rivlin’s endorsement, it remains unclear how Lapid could bring together the disparate group of parties spanning the entire Israeli political spectrum from the left, right, religious, secular and even Arab parties, who have never backed an Israeli government. The only clear objective uniting all these parties, who have been dubbed the “change coalition” appears to be removing Netanyahu from power and little else.

One option that has emerged is a rotational premiership, with Bennett serving first and Lapid going second. Both sides have been negotiating in recent weeks about this rotation, as well as the composition of the cabinet and various ministerial portfolios.

In a statement before Rivlin’s decision, Bennett called for a unity government. While he acknowledged that he preferred a right-wing coalition, he said that “Netanyahu slammed the door on us.”

He said there are two options, further elections which would “destroy the country” or the formation of “broad emergency government … that will get the wheel out of the mud.”

However, the recent failure of “unity” government between Netanyahu and Blue and White leader Benny Gantz serves as a remember of the challenge of bringing ideologically opposed factions together.

In the meantime, Netanyahu will continue to serve as prime minister under a caretaker government, while he faces trial under charges of corruption and bribery.

If Lapid fails to form a government within his 28-day mandate, Rivlin has the option of sending the mandate to the full Knesset, where any MK can get the endorsement of 61 others to become the next prime minister. However, if that fails, the Knesset automatically dissolves and heads to new elections, likely in the late summer.