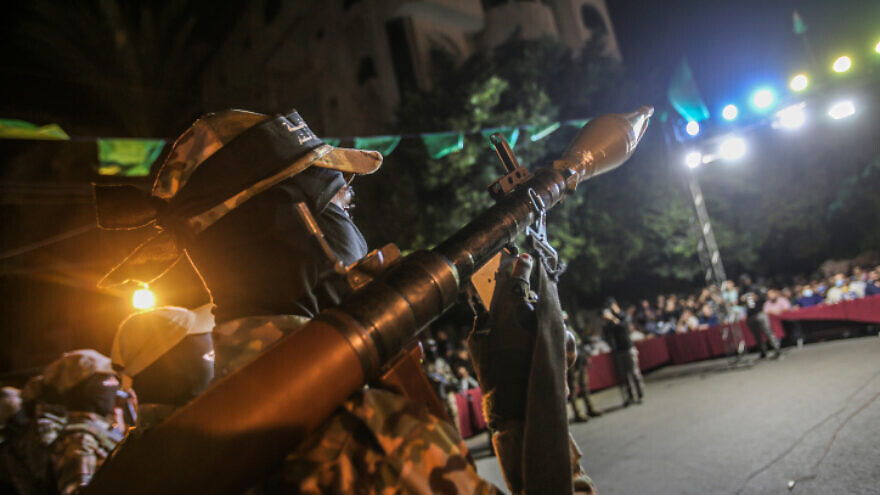 The large-scale Hamas terror plot uncovered by the Shin Bet intelligence agency and broken up in recent weeks is “the most dangerous tactical-operational infrastructure I recall in recent years,” a senior former Israel Defense Forces officer has told JNS.

Maj. Gen. (res.) Eitan Dangot, Israel’s former Coordinator of Government Activities in the Territories (COGAT), and a senior research associate at the Miryam Institute, emphasized the dozens of Hamas operatives arrested as well as the number of suicide bomb vests and weapons recovered in counter-terror raids.

The Shin Bet announced on Monday that it had, together with the IDF, broken up the cell, which was being orchestrated by senior Hamas operatives overseas, including the head of Hamas’s West Bank terror operations, Salah Al-Arouri (who is also Hamas’s deputy chief).

Dangot linked the development to cracks that have appeared in the rule of the Ramallah-based Palestinian Authority and its leader Mahmoud Abbas.

“Hamas hasn’t budged one millimeter from its ideological commitment to Israel’s destruction, and it is implementing this gradually,” said Dangot. “Its military wing is building up force, and engages in rounds of fighting, like May’s conflict. Due to organizational problems, and secondary considerations created by Hamas’s sovereign rule over a population, the organization also opts for periods of calm, in line with its analysis of its interests at any given time.”

With Hamas’s home turf of Gaza facing limitations as a base for war with Israel, Hamas has reserved a strategic role for the West Bank, said Dangot. Beyond using it as a base for terror attacks targeting Israeli civilians and security forces, Hamas is committed to expanding its influence in the areas currently under P.A. rule, “step by step,” with the “objective of taking over the West Bank gradually and infiltrating the PLO,” he said.

Dangot argued that hints of the day after Abbas’s era have already appeared, ever since Abbas called elections in January this year – and that these hints were “greatly amplified when Abbas called off the elections” at the end of April.

Meanwhile, as a “sub-objective,” Hamas has marked out eastern Jerusalem as a branch for its terrorist activities, and the organization is continuously lighting “flames and instigating situations via Jerusalem residents, safeguarding the lava and ensuring that the flames never extinguish,” Dangot assessed.

This includes clashes at the Temple Mount, exploiting tensions around the Sheikh Jarrah neighborhood, and strengthening the movement’s presence in eastern Jerusalem. These activities are all designed to signal to Palestinians that Hamas is looking after their interests and looking out for Jerusalem, a cause that forms a core aspect of Hamas’s call to arms, according to Dangot.

The West Bank, meanwhile, is experiencing a weakening of law and order, which is “strengthening Hamas’s capabilities,” he said. “Hamas identifies this trend and expands its influence, through incitement, through Al-Arouri’s activities, through the allocation of resources. Meanwhile, Hamas in Gaza plays the ‘arrangement game,’” Dangot said, referring to ongoing Egyptian-mediated talks to reach a more stable truce with Israel and find solutions for Gaza’s shattered economy.

“This is an illusion. I call this a temporary ceasefire at best. Hamas understands that it needs to lower its head vis-à-vis Egypt and Qatar, as it waits for the next opportunity,” Dangot warned.

In addition, he said the rioting that occurred in Israel during the May conflict represents “the most urgent problem that Israel must take care of – sovereignty and disturbances within its borders.”

Dangot said that a “small but problematic part of the Arab Israeli sector” exploited tensions, and saw a combination of criminal and nationalistic motives come together for unprecedented levels of violence inside Israel.

This is a more alarming situation than security challenges in the West Bank, he said, since in the latter arena, Israel maintains strong intelligence coverage and is able to effectively activate its force while sharing the common interest of stability with the P.A.

Internally, on the other hand, hostile elements are attempting to send arms into the Arab-Israeli sector, including from radical Shi’ite sources from Syria and Iraq, via Jordan and the West Bank into Israel.

“Israel has reached a junction,” said Dangot. “Internally, it must reestablish sovereignty and deal with pockets of resistance. This means arresting inciters, seizing weapons, and creating deterrence [against domestic security challenges] – this is the number one priority,” he stated. “This requires a new strategic concept, and building an appropriate force – in this case, a national guard with adequate resources. Structural changes should be made to the Israel Police as well, with the Southern District divided into two new districts. A peripheral district would receive small, rapid response forces, while greater forces could be focused around the city of Beersheba. This requires immediate attention. Even the Home Front Command’s units can be transferred to a national guard.”

Israel must not accept divisions between Hamas in Gaza and other arenas such as the West Bank and overseas, he argued.

“Hence, Israel has to respond. It must demonstrate how Hamas in Gaza, Lebanon, Turkey and Qatar is orchestrating terrorism, and take action against those who do so. This includes targeted strikes and strikes on weapons storage centers,” said Dangot.

He added, “We must not fear that this will upset the quiet in Gaza. What have we gotten from this quiet? It has not stopped Hamas’s force build-up. We are in a situation in which Hamas has much to lose with Egypt – hence it will count to three before acting [from Gaza].”