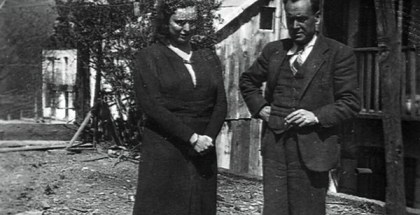 Vicente Giner (Altea, 1930) was 13 years old when that group of fifteen or twenty Polish Jews arrived at his house in Les, in Lleida, during the Second World War. “I remember everything perfectly … although I wish I did not remember anything. It was a horror, “he assures ABC. He had gone to that small town of 600 inhabitants, with his family, at the end of the Civil War. «My father was working in the customs of Barcelona, which was a red zone. When Franco won, he was registered and banished there, that at that time we did not know where he was. It was like a punishment, “he adds.

That corner lost in the valley of Aran was the last Spanish town before reaching Nazi-occupied France. His father, Miguel Giner, was appointed administrator of the border post at the beginning of 1940. He was accompanied by his wife, Dolores; his other daughter, Isabel, and little Vicente. “We lived in the same customs house, where the house and the office were. My father met the Wehrmacht officer who was guarding the border on the other side as head of the Bagnères-de-Luchon barracks. A relationship of coexistence between them was established, from customs to customs, and they even ate at our house. Everything went very well until the end of June 1943 when things went wrong, “he says.

About 9 in the morning of one of those summer days they heard voices on the road. His father came down from the office to see what was going on, since it was not very usual for people to cross over there. His mother and he followed behind, to see those people who spoke in a foreign language and among whom there were a few children. They walked fast dragging a series of suitcases. One of them spoke a little Spanish and started asking Miguel Giner to please let them enter even if they did not have a visa. “They begged him crying, but my father insisted he could not, that he had to comply with the orders he had been given not to let anyone without a visa enter. Meanwhile, I played with the children, my mother fed them all and another neighbor gave them milk … but in the end he gave notice. It is not to excuse my father, but he was considered a red since the end of the war and, if he had not given  notice, some say he would have been shot for rebellion. I do not know, but for sure he would have gone to jail. When the truck arrived, the Germans assured my father that they were only going to take them to a labor camp, that they were not going to kill them. The scene was a drama, with everyone crying when leaving, “recalls Vicente.

That group was part of the avalanche of refugees that occurred across the border of the Pyrenees during the occupation of Vichy France at the end of 1942. At that time, the head of the Spanish Ministry of Foreign Affairs was General Francisco Gómez-Jordana, who fought to straighten the Spanish position and achieve greater neutrality. That led him to be a little more receptive to the arrival of refugees. According to a study by Antonio Marquina, director of the Research Unit on Security and Cooperation (Unisci), the allies evacuated 20,500 refugees (16,000 French and 4,500 allies and stateless persons) throughout Spain during 1943.

In spite of this, obtaining visas for the Jews – to which the Franco regime still considered enemies of the regime with the Freemasons and Communists – was not yet an easy task. In fact, Minister Jordana considered the possibility that Spanish Jews residing in France were sent to Thessaloniki, Constantinople, Smyrna or some point of the Balkans when entering the country. Finally, the idea was discarded. The same study argues that the number of Jews of all nationalities who managed to enter through the Pyrenees since the Torch operation began, in November 1942, until the Normandy landings, in summer of 44, is between 5,000 and 6,000. In June 1943, when the group of twenty Poles arrived at the border post of Les, the entry rate was one or two a day. An amount that demonstrates the difficulty of movements and the controls that suffered these in the France of Hitler.

Therefore, although the arrival in that neutral Spain somehow meant salvation, Miguel Giner did not dare to act otherwise. Both he and the policemen and carabinieri who accompanied him, complied with the orders and were more or less relaxed after hearing the promise that their visitors – from a colony of Polish Jews in France – would not happen anything . A week later, however, the Wehrmacht officer appeared at Giner’s house and remarked calmly: “Do you remember the people you returned … for they were shot in Toulouse?” The mission of the Nazi customs officer was to organize the patrols of the soldiers by the mountains to control the transit of fugitives in the Pyrenees, which were often helped by French guides.

«I do not return to anyone else!»

“It seems like I was living it now,” he continues. Upon hearing it, my father went upstairs as white as wax. He told my mother. Her answer, which was very brave, I will not forget in my life: “Miguel, you have to do something now”. And he replied: “I do not give back to anyone else!” ». According to Vicente Giner, his father later went to see the policemen and carabinieri who were in charge of him, who had also seen the scene in customs, to tell them what the Wehrmacht officer had revealed.

The next thing he did, not knowing how they would react, was to tell them that he was not going to be an accomplice to such barbarism, that he was not going to arrest anyone who fled across his border, despite the orders given by the Franco’s government. “They listened to him and became accomplices too, looking the other way when more Jews arrived to that border,” he explains. But the one that deserves a monument of truth is the town of Les. When their neighbors learned that my father had made that decision, they began to welcome other groups of Jews who were fleeing. They hid them in their own homes, fed them and, at night, made them pass the port of Bonaigua. They knew that on the other side there were people who helped them later to get to Barcelona, ​​Portugal and Vigo.

Giner calculates that in the next two and a half months, his father let 300 to 500 Jews cross the border who were not intercepted by the Nazis in the mountains and who managed to reach their border post without a visa. “There was a kind of effect called when they learned that you could cross over there. Groups of fifteen or twenty passed regularly. I heard and saw several, always in the early morning. They fled from the Germans, they sheltered at night in the mountains and at dawn they went down to Les. Somehow, my father was considered the ringleader of everything, but without the collaboration of the people he could not have done anything, because if any of them had spoken or heard the Nazi officer, imagine, “he explains, before pointing out that, Despite this, he has never referred to his father as a hero: “I do not think it was an act of heroism, but of humanity. My father could not return people knowing that they were going to be killed. And he saved many of those Jews he never saw again and who never thanked him. ”

From that fateful day in June 1943 until the death of Miguel Giner (1970) and his wife (1980), neither Vicente nor his sister commented on the episode with their parents even once. “Never. Nor of the people who saved. They did not want to talk about it, it was like a taboo subject. First, because he played with Franco alive. And secondly, because my parents had to fear that my sister and I had some psychological problem because of it, knowing that I had been playing with the children before they were taken away. Keep in mind that my father, without knowing it, sent to death about twenty people. How do you think he lived with that the rest of his life? “He asks.