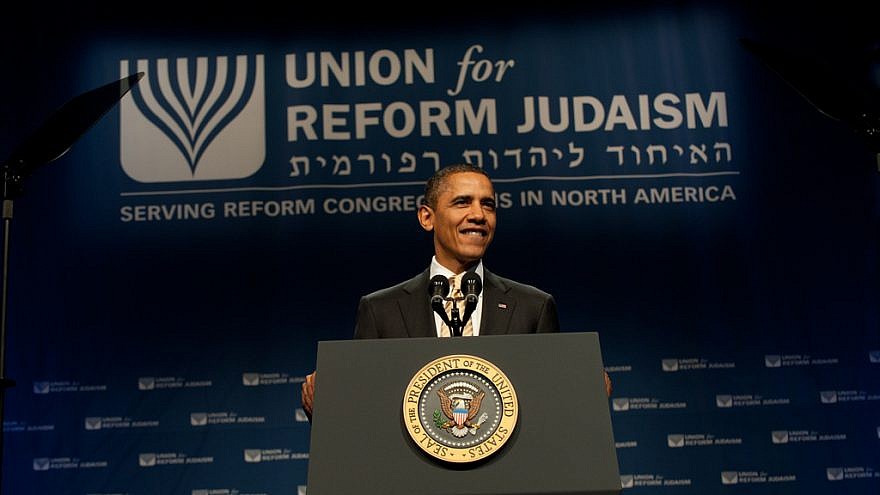 It turns out that the Jewish community didn’t need to wait until the synagogues were packed for Rosh Hashanah and Yom Kippur in order to gauge the amount of political rhetoric that American rabbis were going to deploy in their High Holiday sermons. The Reform movement of Judaism has already stolen a march on the rest of the Jewish world with a statement issued earlier this month condemning President Donald Trump. In a blog post on the website of the Union of Reform Judaism signed by the leaders of all 12 institutions associated with the denomination, the movement made it clear that it considers Trump beyond the pale in ways that even transcend the sort of liberal partisanship that is normally associated with Reform Jews.

The wording of the statement and its timing—just a few weeks before Rosh Hashanah—exemplified that what the movement intends is more than just an effort to depict Judaism as, in the words of the old joke, the Democratic Party platform with holidays thrown in.

For Reform to accuse the president of spreading hate and to level the completely unsubstantiated charge that he is associated with white supremacy and racism in this manner is as unprecedented as the Trump presidency. Doing so as the battle over whether he will get a second term is beginning does more than just skirt the line between issue advocacy and partisanship by a religious group; it crosses that line in a manner that seems to send a message to anyone who believes that Trump is preferable to any of his potential Democratic opponents that they are less than welcome at a Reform synagogue.

Of course, the statement attempts to argue that it’s doing nothing of the kind. It states: “This is not about policy differences or partisanship.” Their claim is that Trump is uniquely awful in a way that goes beyond the usual divisions in American politics. They argue:

There’s no question that Trump has coarsened public discourse. But in order to accept the notion that his provocations are indistinguishable from hate, one has also to accept the idea that the positions he takes, primarily those relating to illegal immigration, are illegitimate rather than defensible points of view, however they might be expressed.

The one example of a Trump statement cited in the statement—his talk about Jews being disloyal to Israel because they were not supportive of his pro-Israel policies—which they claim was a “reprehensible statement that evoked centuries-old anti-Semitic tropes about Jews having dual loyalties and/or being untrustworthy citizens of their nations” was clearly taken out of context and distorted to mean something that the president obviously did not intend. While it would have been better if he had not used the word “loyalty,” his meaning was no mystery. He was perplexed as to why Jews who claim to support Israel are willing to oppose administration stands aimed at bolstering the Jewish state.

In this case, Reform’s stands provide the context for Trump’s argument.

Although they make it clear that they are pro-Israel and support its claim to sovereignty over Jerusalem, they still opposed Trump’s decision to move the U.S. embassy there and to declare that the U.S. recognized Israel’s right over its ancient capital. The explanation they provided was that they thought it would hurt the already dead-in-the-water peace process; to be sure, had a president whom they liked done the same thing, they would have praised the decision to the skies.

Similarly, Reform says they are opposed to BDS. But their claim that Trump attacks “people of color” is a clear reference to his justified criticisms of the only two members of Congress who support the movement that reeks of anti-Semitism: Reps. Ilhan Omar (D-Minn.) and Rashida Tlaib (D-Mich.).

Trump’s remarks are fair game for criticism. But Reform’s willingness to draw a line in the sand about him in this way is impossible to understand were it not for Trump’s conservative economic policies, his judicial nominees, his opposition to illegal immigration and his close relationship with the government of Israeli Prime Minister Benjamin Netanyahu, which is what really angers them.

Their political stands should in no way reflect on the legitimacy of Reform as a denomination of Judaism. Nor should it justify or rationalize attacks on the movement from its Orthodox critics, especially in Israel, where the lack of religious pluralism remains a sore issue for most American Jews.

But Reform’s pose of bipartisanship was laughable long before they issued this statement. The Religious Action Center for Reform Judaism has a history of being a useful ally to congressional Democrats. The movement’s belief that Judaism demanded its adherents to advocate for liberal vision of “social justice” has been a useful political tool for the left.

It should also not be forgotten that at a similar point in the election cycle in 2011 when a president was seeking re-election, the movement greeted President Barack Obama as a conquering hero when he addressed the Reform Biennial after years of his attacks on Israel’s government.

Moreover, by explicitly stating that Trump’s historic level of support for Israel should not influence Jewish opinion about him, the movement is making a judgment that downgrades the importance of that issue. It’s also telling that they aren’t particularly outraged when Democrats attack the Jewish state and Jews, as Omar and Tlaib have done, or employed opponents of Israel, as is the case with Vermont Sen. Bernie Sanders’s presidential campaign.

The idea that Reform disdains partisanship is an assertion so transparently false that not even those who signed the anti-Trump document could make the argument with a straight face. The only difference between what they are doing now is that they are no longer willing to bother going along with the pretense.

By issuing this statement now, the movement is sending a loud signal to everyone in the Jewish community that choosing to support Trump—whether it’s because you care deeply about Israel, are politically conservative or just think the Democratic alternatives are unacceptable—is incompatible with being a Reform Jew.

That may make sense if you really believe that Trump is a threat to American liberty or fostering anti-Semitism. But after nearly three years of an administration that has pursued normative conservative policies that any other Republican would have put forward (albeit accompanied by a Trumpian soundtrack that can hurt the ears), their stand smacks more of partisanship than principle. Nor is there any real basis, other than that, for the claim that Trump has “unleashed” anti-Semitism despite his having repeatedly condemned it, coupled with his outright support of Israel.

American Jews should not feel obligated by their choice of a place of worship to support or oppose any candidate for office. Whatever you may think of Trump, when religious denominations lose the ability to distinguish between partisanship and faith, it benefits neither.