Standing on his deck in Lakewood, N.J., Motti, an Orthodox Jew who did not want to be identified by his last name, spoke of his apprehension about going back to synagogue. “I hear about the traumas people who experience it go through,” he says. “I cannot yet get myself to go into the synagogue.”

Ten minutes away from his home at the local Satmar shul—Lakewood is known for its heavily haredi Orthodox population and number of Jewish institutions—dozens of people mill about in the various prayer rooms in the building. Some are still masked as coronavirus cases go down and vaccinations go up throughout the country, though with no possibility of social distancing in the small rooms.

The owner of several assisted-living facilities, Motti says he is hesitant to take the vaccine, though is “moving emotionally closer to agreeing to take it.” The 60-year-old, whose weight is a possible health risk, won’t let anyone into his home, even with a mask, instead meeting visitors outdoors on his deck. He says the nearest synagogue keeps its windows open, and so he has been able to pray with them that way.

Still, he notes, “I look forward to normal life, to be able to go to shul, and have meals at family and friends’ homes.”

Like Israel, the United States has seen success in its drive towards vaccinations. More than 260 million doses of the vaccine have been administered to Americans with 117 million fully vaccinated. While the levels vary from state to state, areas where most American Jews live, such as the Northeast, are seeing the highest rates of inoculation, coupled with a rapid drop in COVID-19-related deaths and new infections. A bar mitzvah boy is called up to the Torah, with masking and social distancing in place, at the Sydenham-Highlands North Hebrew Congregation in Johannesburg, South Africa, as Rabbi Yehuda Stern reads from the Torah. Credit: Courtesy.

‘It will be a daunting task’

In Johannesburg, South Africa, things are very different. So far, only health-care workers have received the vaccine, with more millions more supposed to arrive over the next few months, and there has been a recent uptick of COVID-19 cases in the country.

At the Sydenham-Highlands North Hebrew Congregation, the services are conducted strictly under strict healthy rules. Everyone wears masks, there is social distancing, congregants bring their own prayer books, and the windows are kept open for proper ventilation.

The synagogue that could hold 1,400 people now hosts about 200 on Shabbat. Even with the strict adherence of members, many still are nervous about going. Denis Solomons offers that he is not scared and should attend more often, but that with the windows open during services, the temperature inside becomes chilly. “I go when I am feeling brave enough to face the cold,” he said during afternoon prayers, which he attended with seven others via Zoom.

With COVID, what is said to be the largest synagogue in South Africa has brought other changes, too, particularly the passing of the mantle of the rabbinate to a younger generation. “If we are to grow the shul and attract younger families, we will need new approaches, fresh ideas, and, indeed, new blood,” Rabbi Yossy Goldman, who in 1986 assumed leadership of the synagogue when the now new spiritual leader, Rabbi Yehuda Stern, was 6 years old.

The community, with many congregants not coming to the synagogue, has seen a decline in its membership. With vaccinations coming to the country over the coming months, Stern will have to find a path to rebuilding the membership to what it once was. “It will be a daunting task,” he says in a Zoom interview, “yet it is the call of the hour.”

He says that he will have to build relationships one family at a time, adding that when a member comes to services who has not been there for a while, it’s like a celebration. However, Stern notes that it’s also a good time for a rabbi to start since so much change has already taken place this year; it may make it easier when the community eventually returns, and they can all begin a new normal together.

Echoing other members, Solomons says while he doesn’t know if he has faith that the vaccine will return normalcy to the synagogue anytime soon, he does have confidence in the new rabbi, saying “I am sure he will be fine.” 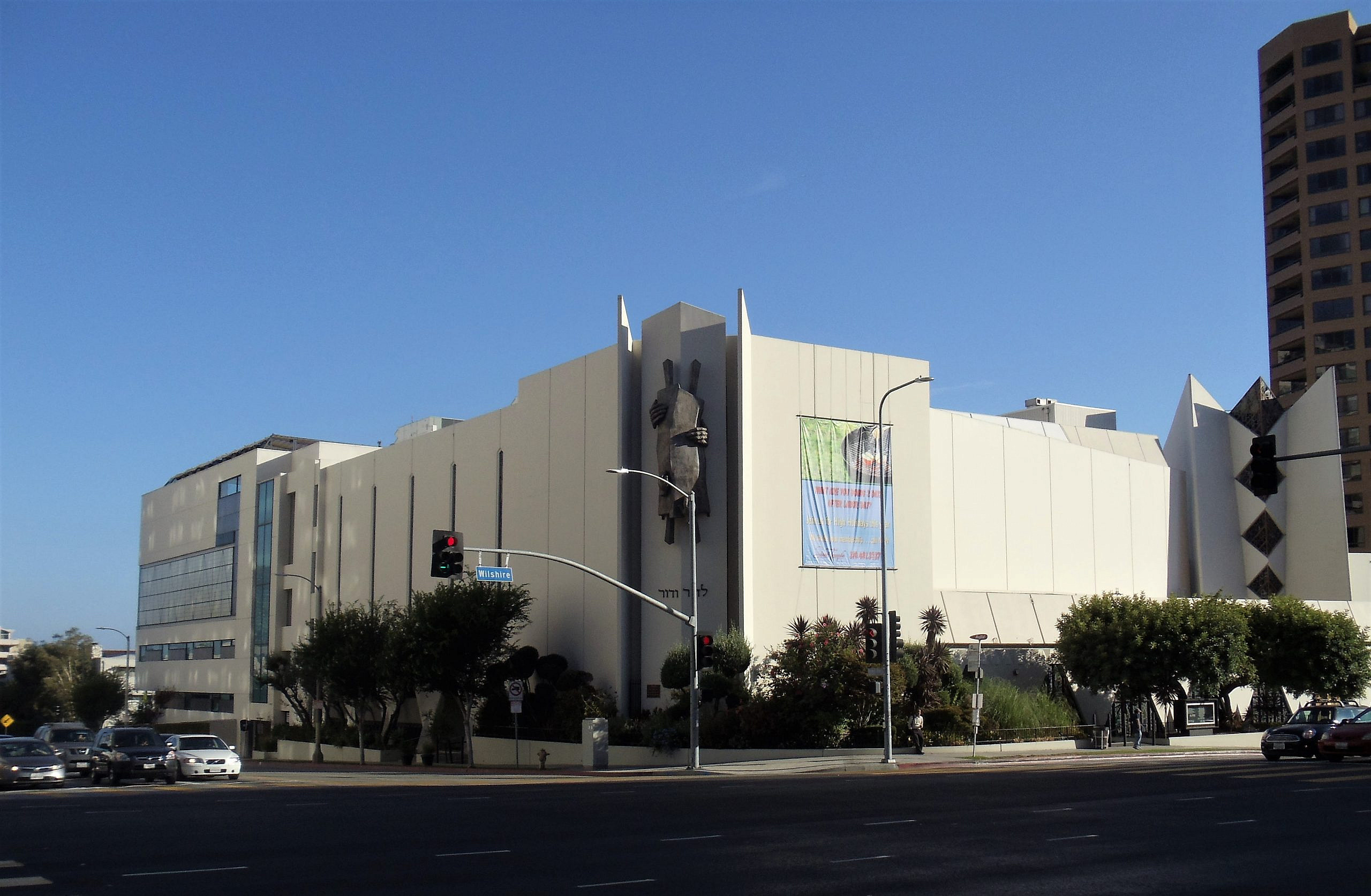 ‘Elevating to be able to see people in person’

At Sinai Temple, the largest conservative congregation in Los Angeles, local health guidelines have once again allowed the opening of their doors to a limited number of worshippers. It has been a difficult year for the temple in an area hard-hit by the virus, with members dying and without everyone being able to support each other in their mourning.

Nevertheless, they have been able to reach more people through technology, which they have never done to this extent before. “I still felt that I was connected to people,” says Rabbi David Wolpe about his daily classes online and messages he sent out to congregants, but it’s different now with at least some of the community get together daily. “It is much better than sitting at home looking at a screen. It is cheering and elevating to be able to see people in person.”

He says that with the vaccinations, people are starting to feel a sense of security, which he says is the “idea of finding ourselves once again, preparing to receive Torah anew, which we could not do together in the past year.”

Yet being able to congregate once again will raise some difficult memories. “It has been a year of losses and mourning,” the rabbi says, and they will be doing the Yizkor memorial services for the first time in more than a year, “being able to once again mourn together as a community.” 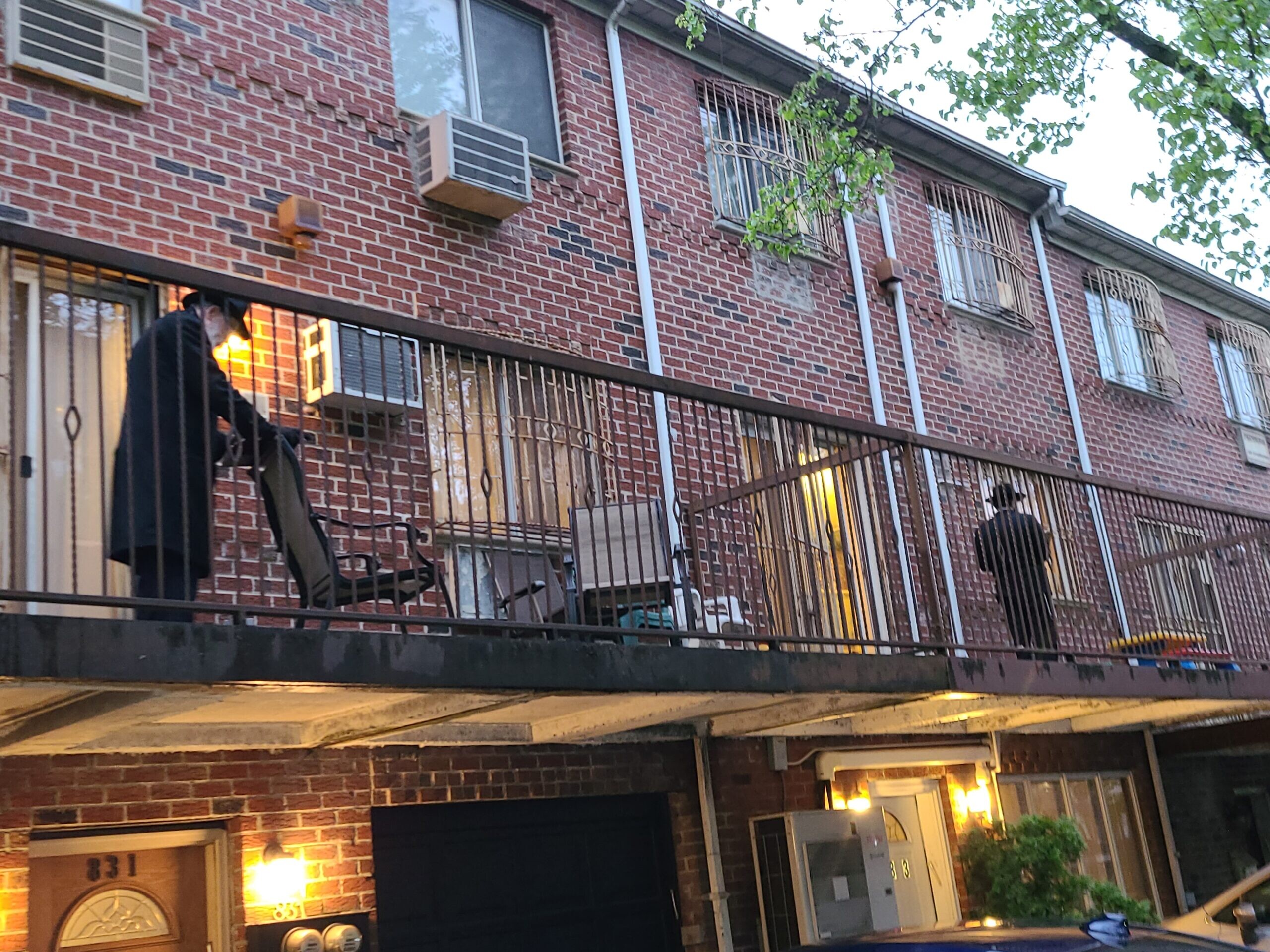 Jewish residents in the Crown Heights neighborhood of Brooklyn, N.Y., participate in a “porch minyan,” April 30, 2020. Photo by Dovid Zaklikowski.

‘We are back to normal’

In Deerfield Beach, Fla., with so many retirees and older residents, strict rules were enacted by the local Orthodox rabbinical leadership. Even porch minyans, says Rabbi Yisroel Edelman, spiritual leader of the local Young Israel—one of the largest in the United States—were banned for many months in the community.

But now, he says, “almost everyone is vaccinated here; we are back to normal,” although as an extra precaution, they are keeping social distancing in place at synagogue. (One of the silver linings, he notes in a tone that reflects relief at the situation, is that “people are too far to be able to talk in shul.”) While there will not be the traditional holiday dairy meal, he expects several hundred to join them for the upcoming Shavuot holiday.

One of the hardest parts of his job during the last few months, when prayer services were kept to a minimum, was that he had to limit his sermon to an almost unheard-of six minutes. “You want to get into it,” says Edelman, and “people should feel where you are going,” which is very difficult to do in that time span.

Now that things are relatively back to normal, the congregants are asking to return to the longer sermons. “They felt that the prayers were streamlined,” relates the rabbi. “It was actually gratifying when people wanted it longer.”