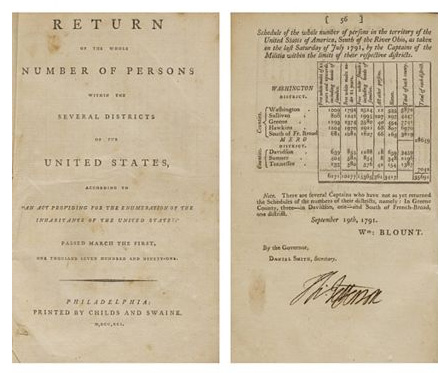 The first U.S. Census began on this date in 1790. The total population was pegged at 3,929,326 (both President Washington and Secretary of State Jefferson considered that an undercount), including 694,280 slaves. Historians estimate that the Jewish population in the thirteen states was between 2,000 and 3,000  (the Census has never asked questions about religious affiliation). Today, the American Jewish population numbers close to six million out of a total U.S. population of 327 million. Of these, 180,000 are estimated by Professor Joshua Comenetz of the University of Florida to be khasidic (based on Census data about Yiddish-speaking children). “If current trends continue, khasidic and other growing ultra-Orthodox Jewish groups will constitute a majority of U.S. Jews in the second half of this century,” according to the University of Florida News, “a potentially profound cultural and political change.”

“The actual Enumeration shall be made within three Years after the first Meeting of the Congress of the United States, and within every subsequent Term of ten Years, in such Manner as they shall by Law direct.” —The Constitution, Article I: 3