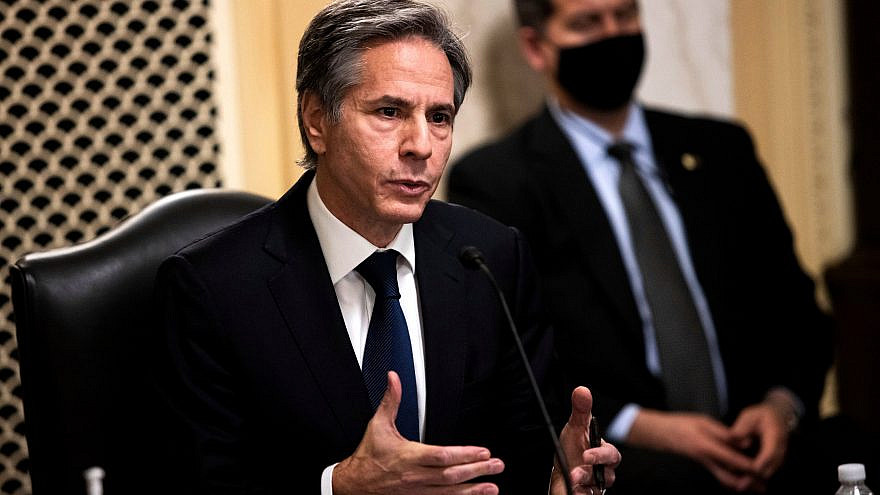 In a phone call with a Middle East leader last week, Secretary of State Antony Blinken said that Palestinian Arabs are entitled to “freedom, security, prosperity and democracy.” Can’t disagree with a word of that. Every human being deserves those things.

The problem is that Mr. Blinken called the wrong guy.

Blinken should have called the P.A.’s Minister of Foreign Affairs, Riad Al-Malki. According to the P.A.’s website, the phone number at his Ramallah office is 972-02-2943140.

Freedom? It’s the P.A. and not Israel that crushes Palestinian strikers and arrests dissidents, including members of its own Legislative Council. It’s the P.A. that tortures its critics, intimidates unions, and treats women as second-class citizens. It’s the P.A. that has a “Cyber Crime Law” mandating prison sentences and fines for anyone who establishes a website that could “undermine the safety of the state.”

Security? It’s the P.A. that shelters terrorists and gives them plum government jobs and allows terrorist groups to maintain vast networks of arms depots and safe houses. A society filled with terror gangs that freely brandish their weapons, terrorize their rivals and invite reprisals from Israel by murdering Israelis is not a secure society—thanks to the P.A.

Prosperity? The P.A. government is deeply steeped in corruption. Nepotism, graft and bribery are rampant. To make matters worse, it pours huge amounts of money into salaries and rewards for terrorists—a whopping $153 million last year alone. Average Palestinians can never expect prosperity when their government has vastly different priorities.

Democracy? P.A. chief Mahmoud Abbas is now in the 14th year of his four-year term, and the last time that elections were held for the P.A.’s legislative body, the Palestinian Legislative Council, was in 2005. Why is Blinken complaining to Israel’s foreign minister about Palestinians not enjoying democracy? Why not speak to Palestinian leaders about why they are denying their citizens democracy?

Abbas has tentatively set May 22 as the date for a new election to the legislative council and July 31 for an election to his own position. Whether or not those elections will actually be held remains to be seen. He has set dates and then canceled them before.

Even if the elections are held, however, one wonders what kind of “democracy” will result. Terrorist groups such as Hamas and the Popular Front for the Liberation of Palestine (PFLP) will be competing. In fact, the PFLP’s list of candidates is headed by Ahmad Sa’adat, who is presently serving a life sentence for murdering an Israeli cabinet minister.

The main challenger to Abbas is a convicted mass murderer—Marwan Barghouti, who is in jail for the murders of five Israelis. Of course, Abbas himself is responsible for many more murders than that during his decades as the deputy head of the PLO and Fatah under Yasser Arafat, and then as Arafat’s successor.

The last two times that the United States supported allowing terrorists to compete in Arab elections in the name of “democracy,” Hamas won a majority of seats in the Palestinian Legislative Council, which was then suspended by Abbas; took power in Gaza; and the Muslim Brotherhood was elected in Egypt. Maybe the lesson is that these societies need to ban terrorists from running as part of the sweeping reforms necessary to move them away from centuries of violence, extremism and totalitarianism.

To encourage those reforms, the Biden administration needs to start by speaking to the right people. Which means our secretary of state needs to be calling the P.A. to talk about its lack of democracy, not reflexively assume that Israel is somehow to blame for how the P.A. governs its people.