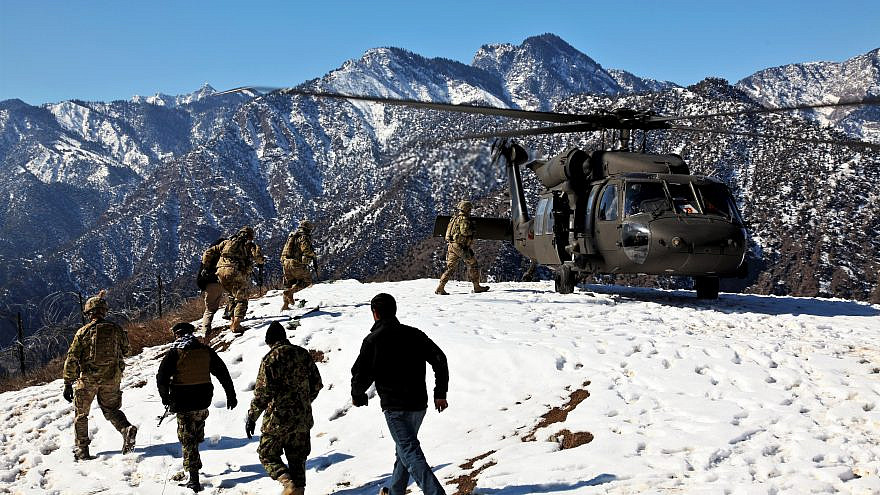 It turns out that there are some things on which President Joe Biden and his predecessor agree. Former President Donald Trump endorsed Biden’s decision announced last week to set a firm withdrawal date of U.S. troops from Afghanistan by Sept. 11 as “a wonderful thing.” During his four years in office, Trump had continued to draw down American forces in Afghanistan and in his last months spoke of wanting all Americans out of the country by the end of his term. But he was restrained by the advice of his military advisers, who opposed a quick exit. While he is right to dislike the unfortunate symbolism of a U.S. bugout on the 9/11 anniversary and said he would have preferred to have them out even sooner, Trump was still clearly in agreement with his successor.

This is remarkable not just because bipartisan agreement on anything is rare these days. It also shows how far both parties and their leaders have come with respect to their views about the need to stay in Afghanistan over the course of the last 20 years. The overwhelming majority of Republicans—and not just the neo-conservatives who were blamed for the wars in both Afghanistan and Iraq—once viewed the need to fight until the Taliban and their Al-Qaeda allies were completely defeated as a foreign-policy imperative. In the 2006 and 2008 election campaigns, Democrats labeled Afghanistan as the “good war” in contrast to the “bad” one in Iraq from which they wished to withdraw. While some Democrats and Republicans have been willing to speak up against the decision, they are noticeably in the minority. It’s clear that most Americans are sick of this “forever war,” and agree with Biden and Trump.

Critics of the decision, like New York Times columnist Bret Stephens, are arguing that the decision was a betrayal of the people of Afghanistan and indicate that Osama bin Laden was right to believe that the United States doesn’t have the staying power to fight long, difficult wars in defense of its values and interests against utterly ruthless opponents willing to wait them out.

It also begs the question of whether pulling the last Americans out of Afghanistan means that both parties are OK with the idea of ending involvement in the Middle East as a whole. If so, the prospect of a bipartisan consensus in favor of such an outcome might have ominous consequences for Israel. And when viewed in the context of the administration’s clear commitment to another round of appeasement with Iran, such arguments seem persuasive.

Though Americans have learned this the hard way by paying a high price in blood and treasure expended, there is a difference between a foolish commitment to an unwinnable war in Afghanistan and a U.S. policy that seeks to essentially ditch Israel and moderate Arabs in favor of a tilt towards Iran. The question is not whether what is happening in Afghanistan is a portent of a future in which the Jewish state is left alone to face Iran. Rather, it’s whether this president is capable of crafting a foreign policy that can be nimble enough to avoid quagmires while also not abandoning the entire region to the tender mercies of Islamist foes.

Stephens isn’t wrong when he says the U.S. retreat will likely usher in a new dark age for the people of Afghanistan. One of the largely unintended consequences of the American invasion was that it helped secure the rights of Afghani women and others who were subjugated by the country’s Islamist leaders. A U.S. retreat will end that progression and any hope for a future in which it might enjoy democracy.

While the neo-conservative belief that all peoples deserve democracy was a noble one, what Americans learned in both Iraq and Afghanistan is that not everyone wants it. That was certainly true in Iraq, where tribal and religious loyalties took precedence over any desire for liberal democracy. It was more the case in Afghanistan, where—no matter how odious America’s Islamist opponents might be—they had a solid base of support that was never destroyed.

Afghanistan has a history of laying waste to the ambitions of foreign forces. That was true for the British in the 19th century and for the Soviet Union in the 1980s. And although America’s cause was just, its hopes that the Taliban could be decisively defeated were futile. Whether you put it down to geography or to a national tradition of resistance, once the initial post-9/11 goal of expelling Al-Qaeda was achieved, the desire to transform the country for the better was a pipe dream.

It’s not unreasonable for Americans to ask whether 20 years isn’t a long enough time for those Afghanis who don’t want to live under the Taliban to get their act together. The notion of a perpetual U.S. garrison in the country isn’t viable or fair.

While admitting defeat is a bitter pill to swallow, especially for the many Americans who served their country so bravely there, both Biden and Trump are right to acknowledge that it’s high time to face up to that unfortunate conclusion.

The argument that abandoning Afghanistan means America’s friends and foes will decide it can’t be relied upon is logical. But it’s not as simple as that. Afghanistan occupies a strategic position next to the Indian subcontinent. Holding it has always been more trouble than it was worth, as commanders from Alexander the Great to George W. Bush learned.

Cutting its losses after two decades of stalemate doesn’t necessarily mean that the United States can’t be relied upon to resist aggression elsewhere, whether the culprit is an aggressive Communist regime in China or a different Islamist opponent in Iran. While the war in Afghanistan was unwinnable, the same is not true of an American effort to restrain and isolate Iran via economic sanctions. Iran is far weaker than those who are eager to accommodate it understand. The idea that the choice with respect to its leaders was only one between war and appeasement was always false. The same is true with respect to other American commitments.

The Kabul government is likely to prove to be an ally that cannot defend itself on its own. That’s tragic. That is not true of Israel, which is strong enough to defend itself. And, as coming events may prove, it is also strong enough to tell Washington that it will not back down on its justified and skillful efforts to stop Tehran’s march to a nuclear weapon even if it doesn’t fit in with Biden’s appeasement agenda.

What the United States needs is a foreign policy that can discern between achievable goals, like the objective of using economic means to force Iran to give up its nuclear ambitions, and ones, like turning Iraq and Afghanistan into democracies, that are sheer fantasy. It isn’t wrong to leave Afghanistan’s fate in the hands of its people, even if what will follow may be awful. But it also means that belatedly doing the right thing in one place doesn’t justify retreats from other far more necessary conflicts.