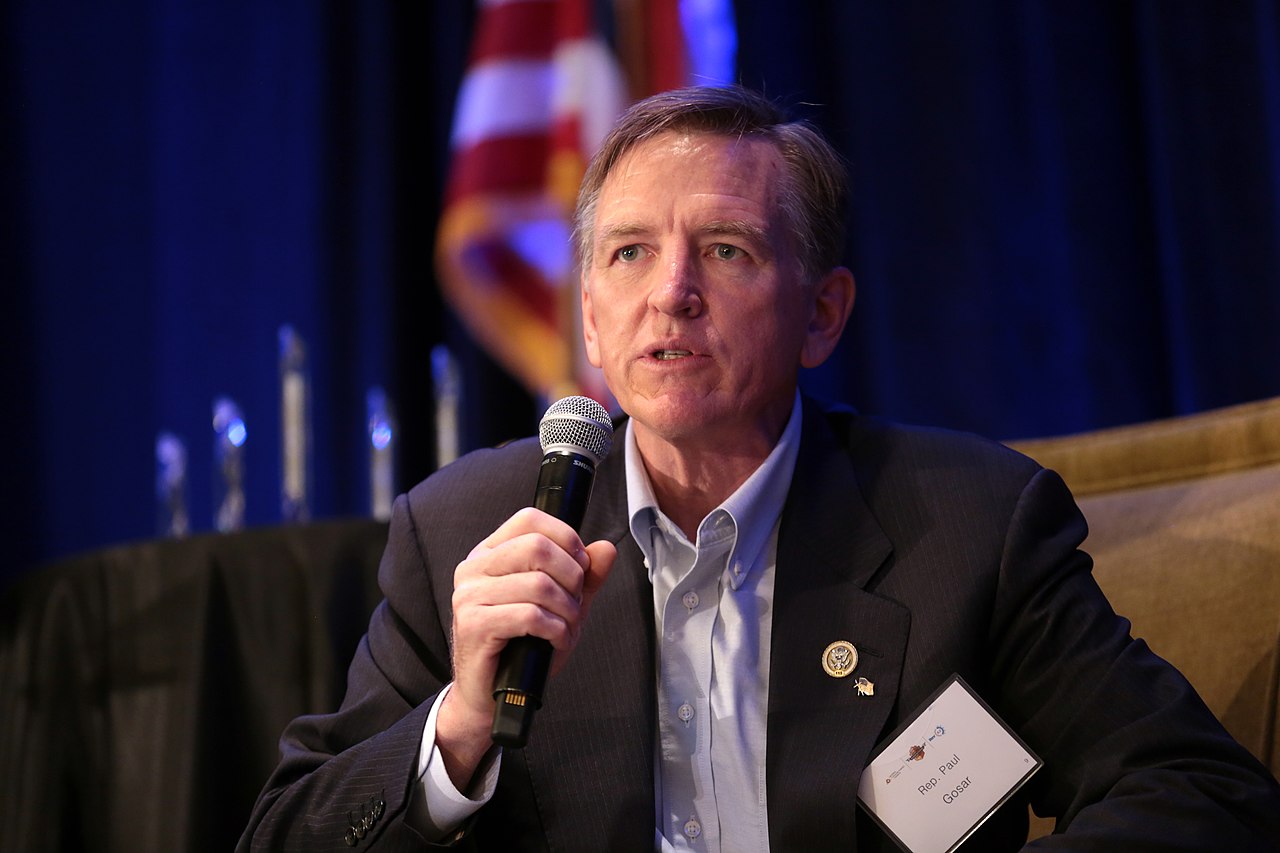 We cannot argue with Nancy Pelosi: “When a member uses his or her national platform to encourage violence, tragically, people listen.”

Whenever her Democratic colleagues in the U.S. House of Representatives bash Israel and by association American Jews, they are inciting violence throughout the United States, as it trembles under the crush of antisemitism. However, the Speaker of the House was addressing the sins of Rep. Paul Gosar.

The House majority acted appropriately to censure Gosar and remove him from two committees in a 223-207 vote on Wednesday afternoon. The Arizona Republican surely deserved to be so strongly disciplined for posting an animated video that depicted him killing Rep. Alexandria Ocasio-Cortez, who represents portions of Queens and the Bronx, and assaulting President Biden.

As steadfast Democrats stressed, Gosar’s cartoon incites violence. Most of Gosar’s siblings have called him dangerous. Hopefully, his censure will deter followers from committing crimes.

On the Democratic side of the aisle, two representatives who have accused Israel of ethnic cleansing, war crimes and apartheid, with no evidence, remain on their committees. Reps. Ilhan Omar and Rashida Tlaib’s brazen condemnations of Israel could easily inspire their supporters to assault or kill American Jews.

The hour-long debate preceding the vote turned into a race to determine who could best lower the bar for hypocrisy. Republicans defended Gosar for having removed the post and disingenuously claiming that the cartoon does not incite violence. Democrats sought to strike a blow against racism and sexism while tolerating antisemitism in their ranks.

We cannot blame Democrats for demanding justice, but not on the backs of the Jewish people. I cringe when Tlaib and Omar employ coarse language to bash Israel, raising tensions that were high long before they took office in January 2019. Their distortions amount to a slap in the face to Jews here. It is in our DNA to support Israel’s existence, but many of us do not excuse Israel for flawed actions. However, listening to sweeping, fact-free accusations against Israel is both insulting and threatening.

A massive upsurge in antisemitic crimes, including murders, engulfs this nation from both the right and the left. I wonder if we can draw a straight line between verbal antisemitism on Capitol Hill to assaults upon Orthodox Jews in Brooklyn’s Crown Heights and rampages through the Fairfax section of Los Angeles, a long-standing Jewish neighborhood.

“Lately, even our party’s establishment and its leaders have become complicit in the consequences,” wrote Douglas Schoen and Andrew Stein in the Oct. 26 edition of the New York Post. “Such attacks put Jews in tangible danger and threaten the United States and Israel’s national security, given that Israel is our closest ally and the only stable democracy in the Middle East.”

Stein is a former New York City Council president and Schoen is founder and partner in Schoen Cooperman Research, a polling and consulting firm.

A drive to take Omar to task nearly three years ago fizzled out as Democrats ended up passing legislation to denounce all kinds of prejudice.

At the time, Pelosi and other Democrats said in a statement, “Antisemitism must be called out, confronted and condemned whenever it is encountered, without exception.” Though hard experience proves that Omar has not changed, Pelosi made an “exception.” She went so far as to endorse Omar in the 2020 Democratic primary in Omar’s district, Minneapolis and vicinity. Omar was re-nominated and re-elected in the subsequent general election.

Roughly three-quarters of American Jews vote for Democrats because they are every bit as worried about domestic issues as most other Americans. However, young, idealistic Jews have related stories of how they were ostracized from social movements for supporting the existence of Israel or solely because they are Jewish.

Democratic hypocrisy over Tlaib and Omar is understandable. The only possible explanation can be that anti-Israel voters will either sit out the next election or vote for another liberal party. Even-handed Democrats may be gritting their teeth, but they persist in going along with it.

I counted at least four Jewish Democrats who joined in piling on Gosar during Wednesday’s televised debate without mentioning Omar or Tlaib. Republicans, on the other hand, did not ignore them.

Conservative Lauren Bobert of Colorado reminded her colleagues that members of the “Jihad squad” praise terrorists. James Comey of Kentucky referred to “antisemitic statements.” “The rules are not being applied equally,” added Kelly Armstrong of Kentucky.

“The Democrats actually defended her (Omar),” said House Minority Leader Kevin McCarthy, who repeatedly proclaimed “Rules for thee, but not for me.” McCarthy wore out the term’s effectiveness by applying it to a number of Democrats besides Omar and Tlaib.

Meanwhile, Gosar’s critics issued statements that could have applied just as well to some of their fellow Democrats:

Sylvia Garcia of Texas: “It is our moral imperative for us to be collegial.”

Debbie Wasserman Schultz of Broward County, Florida, who is Jewish: It is a cartoon “glorifying and promoting violence.”

Barbara Lee of Oakland, Calif.: The cartoon “sends a message to the public that these messages are condoned.”

Susan Wild of Allentown, Pa., who is also Jewish, declared Seinfeld-like: “Paul Gosar has shown us who he is.”

Katherine Clark of Boston’s northwestern suburbs: “This is connected to sexism and racism.”

Is anything connected to antisemitism?