Home Recommended Books Friendship His Key to Survival at Auschwitz 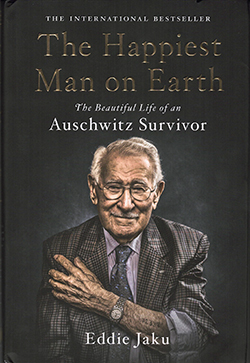 This memoir by Australian centenarian Eddie Jaku departs from memoirs by other Holocaust survivors in its contemplation of the role of friendship in enabling prisoners of Nazi concentration camps to survive.

Jaku had met Kurt Hirschfeld, a fellow German Jew, when both were interned in Buchenwald shortly after Kristallnacht.  Their ways parted when the Nazis decided to take advantage of Jaku’s skills as a mechanical engineer.  Jaku was supposed to report to an aeronautical factory in Dessau, but instead he escaped to Belgium with other members of his family. But in 1940 Germany invaded Belgium, and Jaku escaped to Vichy France.  But he was soon rounded up and sent to Auschwitz where he and Hirschfeld were reunited. Although they were assigned to different barracks, “at the end of every day, we would meet, and walk, and talk,” Jaku writes.  “This simple thing was enough to keep me going, to know there was someone left in the world who cared about me, and who I could care about.”

Hirschfeld was assigned to a shoemaking factory, where workers were given less stingy food rations than other workers.  “Often he was able to save a little of his extra food and share it with me,” Jaku said.  “We were able to look after each other.  This is real friendship.”

As a mechanical engineer, Jaku worked with machines, occasionally finding pieces of discarded metal that he could fashion into knives with wooden handles, which he would trade for food or soap.  Jewish doctors who were assigned to the front to treat German casualties were paid in potatoes, and on one occasion Jaku traded one of his creations for potatoes, which he secreted in his pockets.  One day, an SS guard aimed a kick at his backside, and hit the potatoes.  Pretending he was hurt, Jaku limped away, and when he reached Hirschfeld, he facetiously apologized: “I’m sorry but today, the meal is mashed potato!”

He and Hirshfeld helped each other if either was too injured or sick to work, supplementing each other’s food supply, walking and talking, and trading little presents – such as soap, toothpaste and rags for their feet.  Some exhauasted and disheartened prisoners became so distraught they threw themselves against the electric fence surrounding the camp.  There were times Jakualso  thought of ending his life, but Hirschfeld restrained him.  “Without friendship, a human being is lost,” Jaku philosophizes.  “A friend is someone who reminds you to feel alive.”

After the war both men married and started families, but they remained in touch for their lifetimes.  Jaku eventually moved from Europe to Australia where he and his wife, Flore, opened an automobile repair service that grew into a car dealership.  From those beginnings, they expanded into real estate, making a comfortable life for themselves and their children.  In 2013, Jaku was awarded the Order of Australia Medal for his service to the Jewish community, having given speeches and talks to thousands of people about the Holocaust.

Jaku became a familiar personage at the Jewish Museum in Sydney, Australia, where he told his story to visitors, either in groups or in one-to-one meetings.   “If I get through to even one person, it is worth it.,” he asserts.

Jaku’s conversational memoir, brought to press with the help of writer Liam Pieper, is an easy-to-read introduction to the Holocaust for young readers and adults alike.  It is filled with the worthwhile reflections of a man who has seen and learned so much over a century of life.