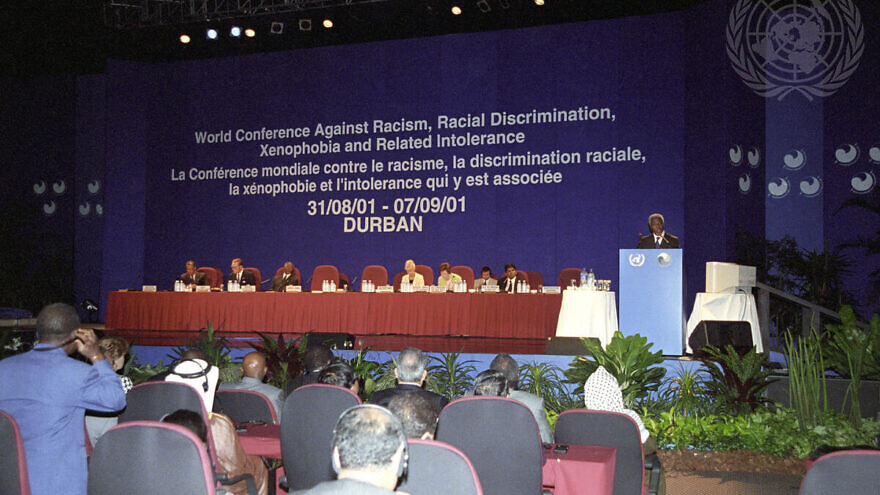 Next week, the United Nations is set to reinforce infamy. In the wings of the U.N. General Assembly meeting in New York, it is to hold a 20th anniversary summit of its so-called World Conference against Racism that took place in Durban, South Africa, four days before the terror attacks of Sept. 11, 2001.

The New York event is outrageous. For Durban was a terrifying circus of psychotic anti-Jewish hatred whose sole purpose was to demonize and delegitimize Israel under the Orwellian banner of “human rights.”

The latest summit—called Durban IV—is being boycotted by at least 16 countries, including Australia, Canada, France, Germany, the Netherlands, Hungary, Israel, the United Kingdom and the United States. But it’s sickening that it is still going ahead at all. For its purpose is to ratify the program decided in 2001, a meeting that has become a byword for hatred, intimidation and bigotry against the Jews.

Under the camouflage of attempting to combat racism, Durban’s initial documentation downgraded the Holocaust, referred ludicrously to “Zionist racist practices against Semitism” and accused Israel of “ethnic cleansing of the Arab population in historic Palestine.”

Singling out Israel as the alleged perpetrator of these horrors—a charge that peddled malign falsehoods while failing to identify any of the myriad states or groups that are indeed guilty of such behavior, including the Palestinians themselves—was itself an act of anti-Semitism.

Yet this governmental part of the meeting was preceded by something much worse. This was a conference of NGOs that dominated the proceedings by turning into a Jew-baiting lynch mob.

Jewish delegates were forced to run a gauntlet of anti-Semitic abuse and threats. There were shrieked claims that they were murderers, flyers declaring that “Hitler should have finished the job” and pamphlets with monstrous caricatures of hook-nosed Jews depicted as Nazis spearing Palestinian children and dripping blood from their fangs.

Warned that they were in physical danger, these delegates were forced to take shelter for their safety with the Durban Jewish community.

The final NGO declaration called Israel a “racist nation” and accused it of genocide. It was all so vile that even Mary Robinson, the U.N. human-rights commissioner who was no friend of Israel, recoiled at the language and unprecedentedly refused to formally hand the declaration to the government representatives when their part of the conference began.

As the Jerusalem Centre for Public Affairs has observed, while the NGO declaration and program of action weren’t officially adopted by the governmental conference, their content remained on record. “The documents,” notes the JCPA, “have entered into history as one of the primary outcomes of the Durban conference. They have in fact become the ‘road map’ guiding the BDS [Boycott, Divestment and Sanctions] movement.”

This shocking hate-fest was certainly not the start of the global pogrom against Israel and the Jews.

By the time of Durban, the Palestinian Arabs’ Second Intifada had been raging for a year, blowing Israelis to kingdom come in buses and pizza parlors. And it was back in 1975 that the United Nations passed its infamous resolution declaring that Zionism was “a form of racism.”

Although that resolution was revoked in 1991, the venomous belief at its core—that the Jews alone were not entitled to self-determination in their own historic homeland, which had only ever been theirs alone and from which they had themselves been ethnically cleansed—spread through Western progressive circles.

At Durban, it violently erupted in the diseased body of “human rights” culture like a global cancer. Under the imprimatur of the United Nations, Durban embedded and normalized the demonizing of Israel and Jew-baiting—the apartheid libel, the insane claim that Israel was committing genocide and the grotesque equation of Israelis with the Nazis, which have now poisoned much of the Western “progressive” mind.

In 2009 and 2011, the United Nations tried to reaffirm the Durban program and its delegitimization of Israel. The 2009 Durban review conference rapidly descended into another hate-fest, with the formal opening address by Iran’s then-President Mahmoud Ahmadinejad calling for the eradication of Zionism and attributing all the ills of the world to Zionism and Israel.

Appallingly, next week’s meeting aims to reaffirm Durban once again. Its surreal proposed resolution calling for the promotion of “tolerance, inclusion and respect for diversity” and deploring the “the global rise in hate speech, constituting incitement to racial discrimination, hostility and violence” describes the 2001 Durban Declaration and program of action as the “solid basis and the only instructive outcome of the world conference which prescribes comprehensive measures for combating all the scourges of racism and adequate remedies for victims.”

Perhaps the most shattering lesson from the Durban conference is that its anti-Semitic excesses were not only ignored, but have been sanitized and promoted as the signature motifs of decency. The causes of “human rights” and “anti-racism” have actually been weaponized against Israel and the Jews throughout the West.

Moreover, as part of the Marxist armory to suborn the West’s intellectual elites, these weapons have also been deployed against the West itself. As the old adage has it, what starts with the Jews never stays with the Jews.

The result is a Kafka-esque intersectionality nightmare aimed at demonizing and destroying Western culture and society, and in which the Jews, who figure in the imagination of the anti-Semitic left as a cabal covertly controlling capitalism and manipulating the world in their own interests, are deemed to be “white supremacists” and so can never be victims.

These tropes now form the discourse in most Western intellectual circles. And despite the stand taken by several countries against next week’s New York disgrace, Western governments continue to indulge this bigotry.

Thus America, Britain and the European Union continue to fund the Palestinian Authority, which pumps out precisely the same kind of psychotic, anti-Jewish images, lies and incitement produced at Durban.

The NGOs that contributed to the Durban auto-da-fé are still producing vicious and sustained anti-Israeli lies and incitement. Yet no governments denounce them or hold them to account.

The United Nations itself continues to act as the crucible of the campaign to delegitimize and destroy Israel. Last year, for example, the U.N. General Assembly adopted 17 one-sided resolutions against Israel and only six against any of the other 192 member states for human-rights violations.

Last September, the U.N.’s Economic and Social Council condemned Israel alone for allegedly violating women’s rights—even though Israel is the only upholder of women’s rights in the Middle East.

Last May, the U.N.’s World Health Organization accused Israel of violating the Palestinians’ health rights over COVID-19—a wickedly false claim, and with Israel once again the only country to be singled out during the entire assembly.

The U.N.’s charter says its role is “promoting and encouraging respect for human rights and for fundamental freedoms for all without distinction as to race, sex, language or religion.”

The world body betrays this commitment almost every day. Conspicuously failing to deal with the racism and gross abuse of human rights around the world, it chooses instead to persecute Israel, a country that guarantees human rights for all its citizens.

The Durban conference displayed the moral bankruptcy of the United Nations for all to see. Yet the West continues to treat it as the legitimate arbiter of world peace and justice. Support for the United Nations is the pivot for the West’s loss of moral compass.

The boycott of the New York meeting is thus an empty gesture. It’s the United Nations itself that is allowing evil to triumph—and in which the two-faced, cowardly and self-indulgent West is all-too complicit.