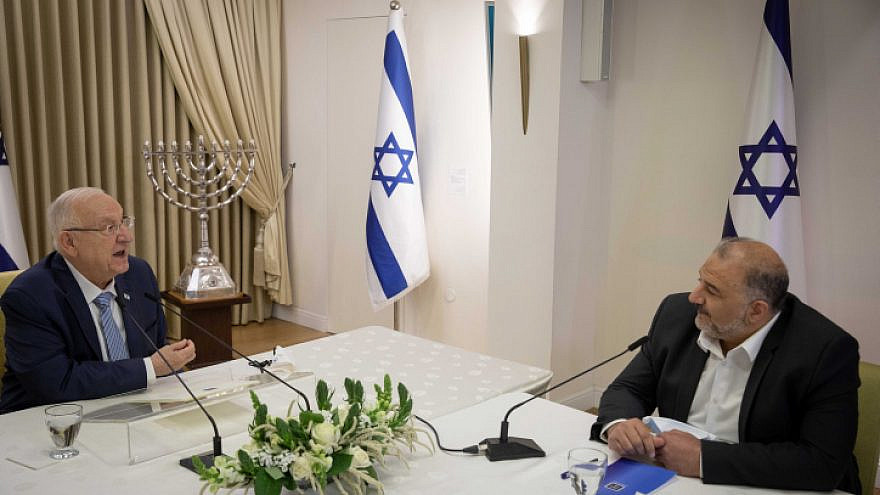 Israel remains in a political deadlock as both right-wing and left-wing blocs remain unable to form parliamentary majorities, and similarly cannot find formulas to create a unity government. The situation is creating an opportunity for Arab parties, which have never previously joined any Israeli government, to solve the impasse by throwing their mandates behind one of the blocs.

In particular, the United Arab List, known in Israel by its Hebrew acronym Ra’am, has signaled its willingness to break from long-held political tradition and sit alongside its Jewish counterparts within a coalition. Ra’am party chairman Mansour Abbas has entered into negotiations with both blocs, seeking to extract substantial political returns in exchange for the party’s four seats.

Yet opposition—particularly among right-wing Jewish parties—over the Ra’am Party’s still-radical ideology may ultimately prevent the political branch of Israel’s Islamic movement from becoming a political “kingmaker.”

Rodayna Badir, an expert on Arab society in Israel, warns that Abbas’s willingness to sit with his Jewish Knesset colleagues is not an ideological shift towards religious coexistence, but rather a shrewd political tactic to increase its influence, particularly among more than a million Arab voters.

Badir noted that it is consistent with the history of the southern branch of the Islamic movement to try and reach understandings with the Israeli government, despite the movement’s radical Muslim Brotherhood roots.

As far as Arab voters are concerned, many seek additional funds to address growing violence and crime within their communities, as well as for improved housing and infrastructure.

A power struggle over who will lead Israeli Arabs

Before the most recent election—Israel’s fourth in just two years—Ra’am broke away from a larger Joint List of Arab parties. The breakaway paid off for Abbas when Ra’am barely crossed over the Knesset’s minimum vote threshold. Now the Knesset has two separate Arab parties, and Abbas can potentially be a political kingmaker even as other Arab Knesset members prefer to remain in the opposition.

“The history of the Islamic movement shows that it is not used to receiving instructions or being No. 2,” assessed Badir. As for the Joint List, “Ra’am was second in power after the Communist Hadash Party, so a power struggle ensued over who will lead the Israeli Arabs.”

By entering the government and receiving a special budget for the Arab sector, “this would only strengthen their power in Arab society,” she added. “The Islamic movement always moves on two equal axes: what the Arab public wants and preservation of its power as an organization.”

Hamas in the Gaza Strip is a more radical Muslim Brotherhood offshoot that regularly uses violence to achieve its goals. In other countries including inside Israel, the movement utilizes more pragmatic political tactics. Being that Ra’am is just one component of an Arab minority in a strong majority Jewish state, it is drastically limited in what actions it can effectively carry out.

Arab society currently seems deeply conflicted, continued Badir, adding that the current leadership vacuum is not helping the community deal with its pressing issues. “Arabs are tired of slogans and are looking for a change,” she said. “The Islamic movement has managed to absorb this sentiment and act on it.”

Shahin Sarsour, a veteran Arab political observer and former adviser to various Arab Knesset members, explains that the Islamic Movement has a base of around 175,000 to 205,000 voters or approximately four to six mandates.

“Their voters want to see an Arab party that has influence and not just sits in the Knesset without any achievements for the Arab sector,” he said.

Still, Sarsour told JNS that despite Abbas’s efforts, the likelihood of Ra’am joining either a right-wing or left-wing government remains low.

While Israeli Prime Minister Benjamin Netanyahu has aggressively courted Ra’am’s four seats, which represent critical mandates he needs to form a majority, key political ally Betzalel Smotrich of the Religious Zionists Party refuses to sit with any Arab party. It’s not clear whether key additional right-wing party leaders Gideon Sa’ar or Naftali Bennett would agree to sit together with Ra’am or rely on it to support a minority government from outside the coalition.

Last week, Bennett met with Abbas—the first-ever direct meeting between the two-party leaders—to explore whether there was any room for cooperation.

Even if Ra’am doesn’t join a government, its efforts to engage with the Israeli political establishment is a drastic change from the Arab parties’ role in the past, which was limited to criticizing Israeli governments from the opposition. Such efforts may ultimately lead to Arab parties playing a more active role in forming governments in Israel, gaining increased budgets for the Arab sector and improving cooperation with their Jewish counterparts.